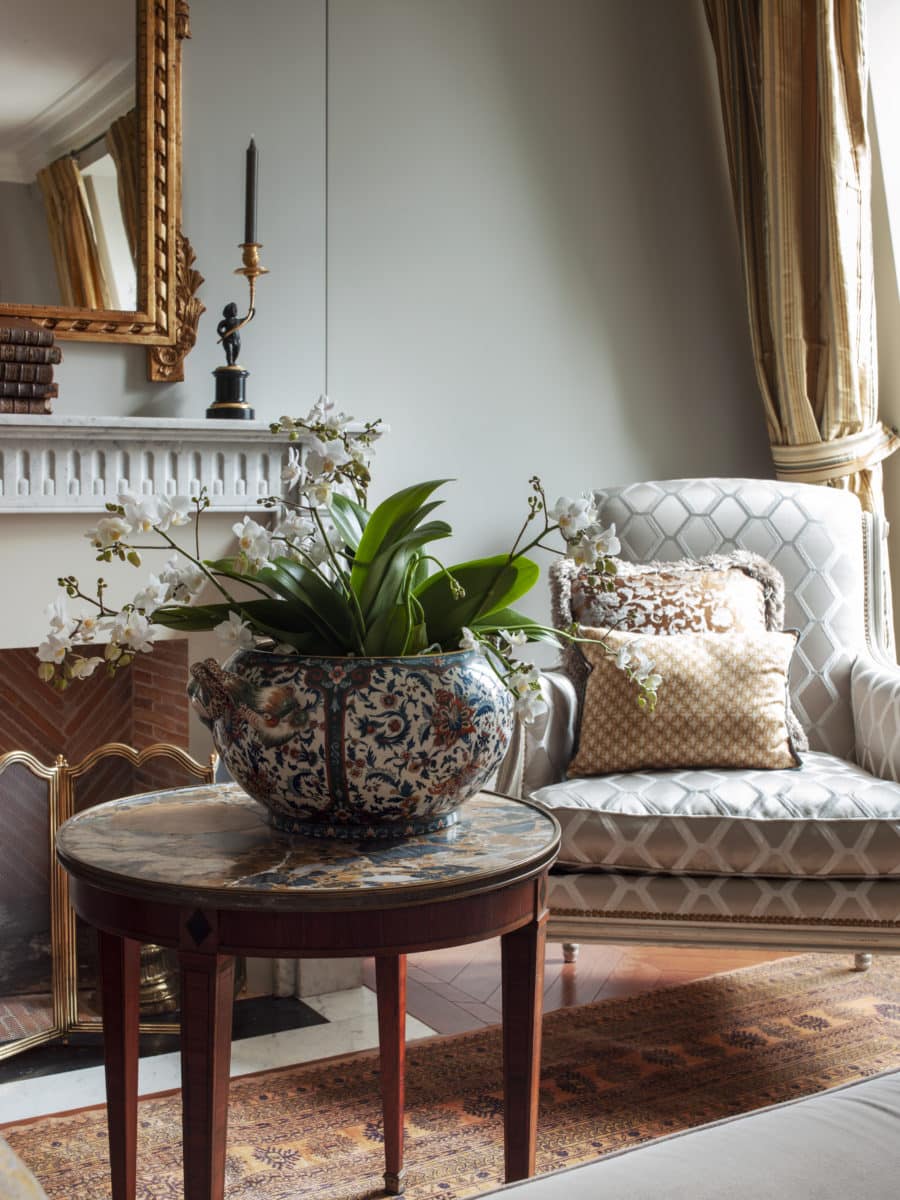 Extreme makeover: a Paris apartment goes from ruin to resplendent

The MacDonalds were looking for a property with an Eiffel Tower view, where they could add value and make the property the way they wanted it to be. We found a property of 50m2, located on the top floor of a building just one block from the Champs de Mars, with the Eiffel Tower at the end of their street. 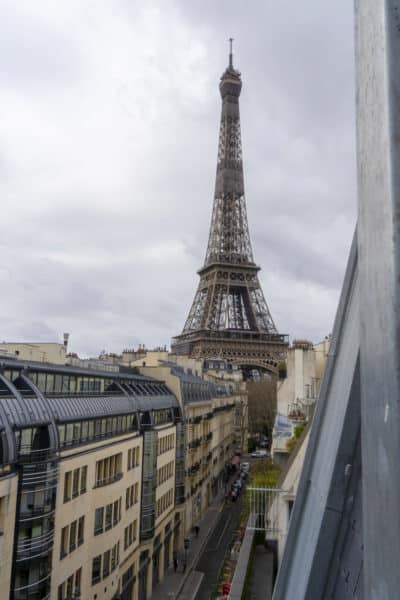 Due to decades of neglect, it was not habitable and had no plumbing connection for the toilet. The property had only a Sanibroyeur toilet, a sort of mechanical toilet designed for retrofit solutions. All the flooring was damaged due to a leaky roof, and broken skylights. The windows were broken and anything of value had since been long removed, leaving a forlorn appearance. On the plus side, the property was a bargain, it had a coveted Eiffel Tower view, and it was adjacent to an unused hallway and a former servant’s toilet. This presented an additional opportunity to purchase and create a second bathroom. Adding space at a below-market-price, is one way to really add instant value to a property.

The MacDonalds had a design plan already in mind, but they weren’t completely pleased with it. We introduced Jeff Tometich and the team at MRL Design Studio as a potential resource to redesign and manage a renovation. The clients wanted a traditional Parisian apartment with a classic design (Moldings, stone fireplace, classic cement tiles, marble bathroom, etc.) and the team at MRL Design Studio excel at bringing classic French design up to modern, luxury standards.

Initially the project called for a 2-bedroom 1- bathroom apartment to allow the clients to move in as soon as possible. Plans were made for a second bathroom in the event the clients purchased the adjacent servant’s toilet and adjacent hallway. Since the timing of that purchase was uncertain, plumbing and electrical lines for the tentative 2nd bathroom were laid under the floors in the master bedroom in preparation for an eventual ensuite bathroom for the master bedroom.

In traditional French architectural design, the bedrooms, kitchen and bathrooms were hidden away from any reception rooms so that visitors didn’t see into any private areas. In keeping with tradition, the new design was laid out in a modern reinterpretation of this theme.

To create a grand entrance, stone tiles in a cabochon pattern were used. The stones came from a local Parisian supplier who specializes in antique floors. MRL Design Studio visited the famous Paris flea markets in St-Ouen with the clients to purchase an antique console with a marble top and sconces to light the entrance, adding a few personal touches to their entrance. 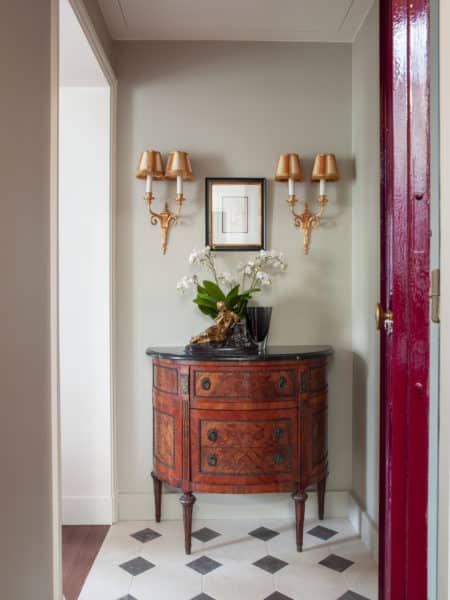 An antique fireplace from the same period as the building was added. It’s not functioning but adds character. Ceiling moldings were added throughout the apartment, which would have originally been found in most Parisian apartments of the period. Elegant furniture was selected, but extra thought was given so that it was also light and able to be moved around – a necessity in small spaces.

Custom cabinetry around the fireplace was added to hide the water heater and electrical panel, and an antique gilded mirror was installed above the fireplace to disguise a TV cabinet. 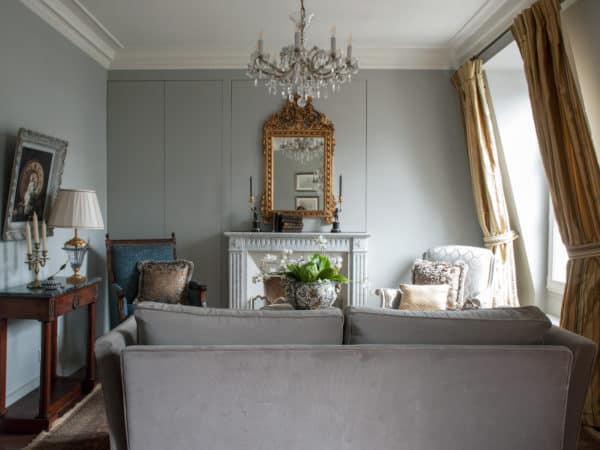 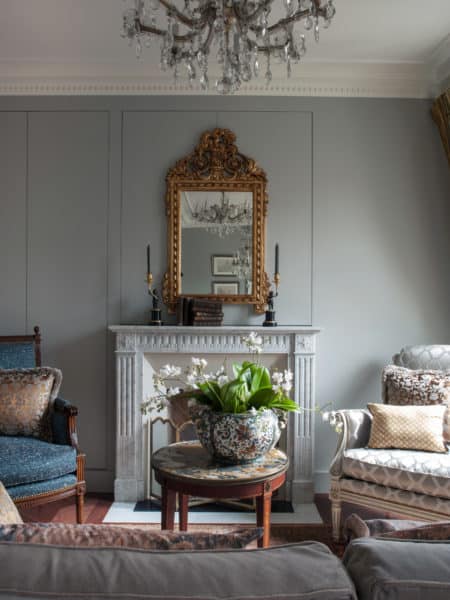 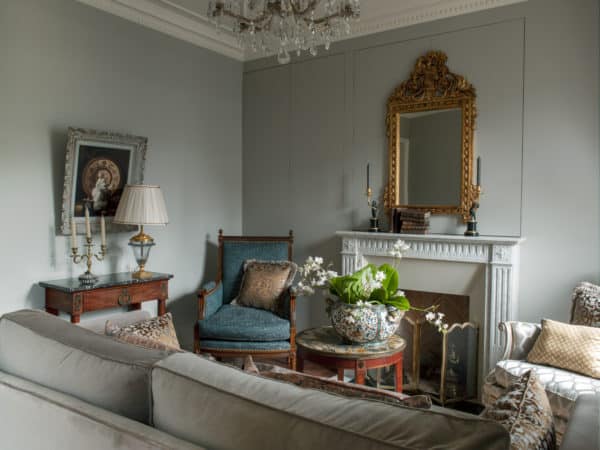 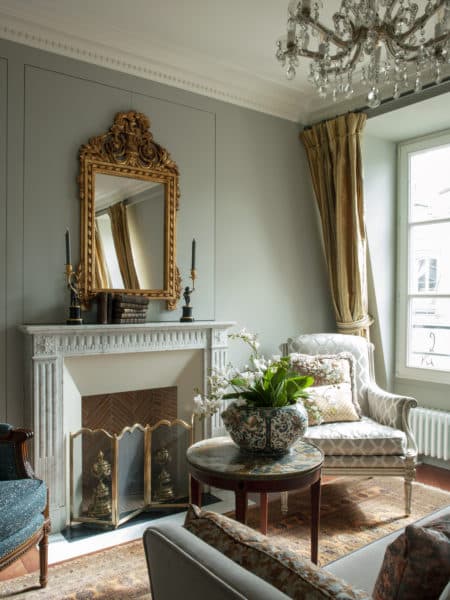 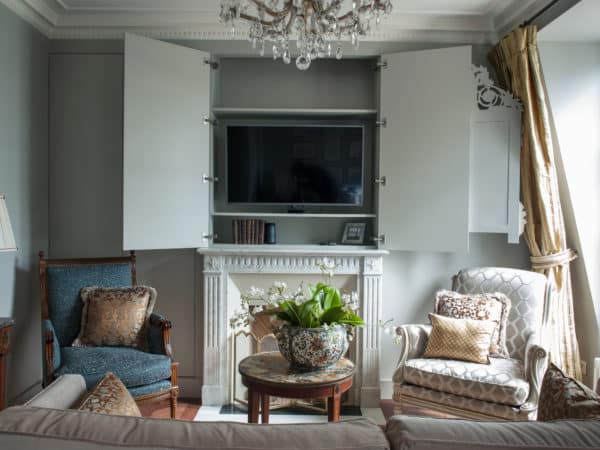 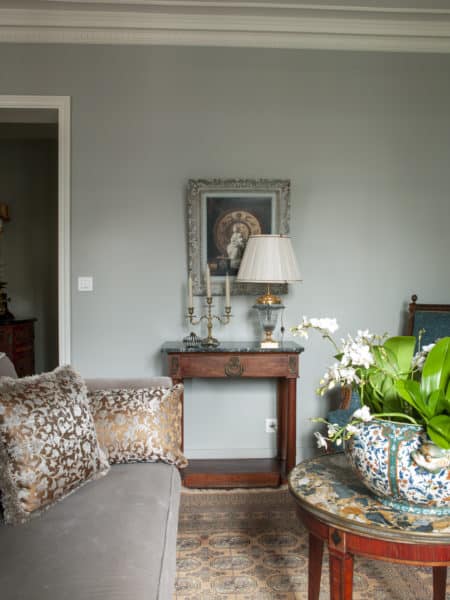 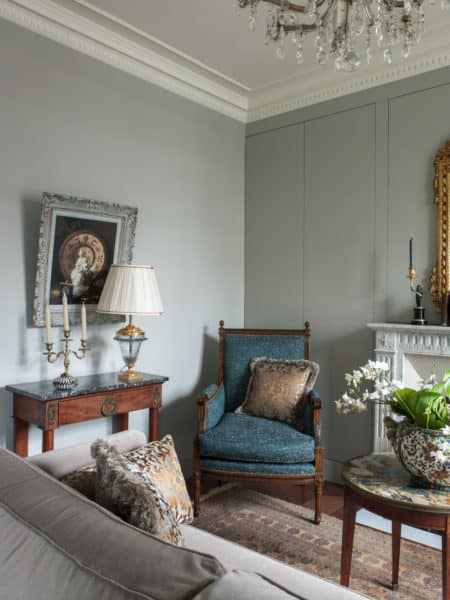 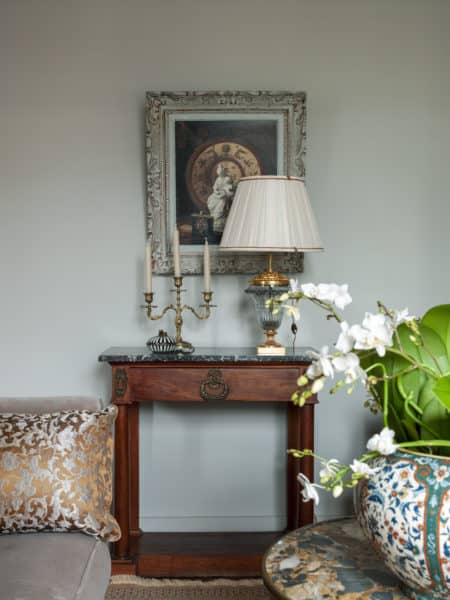 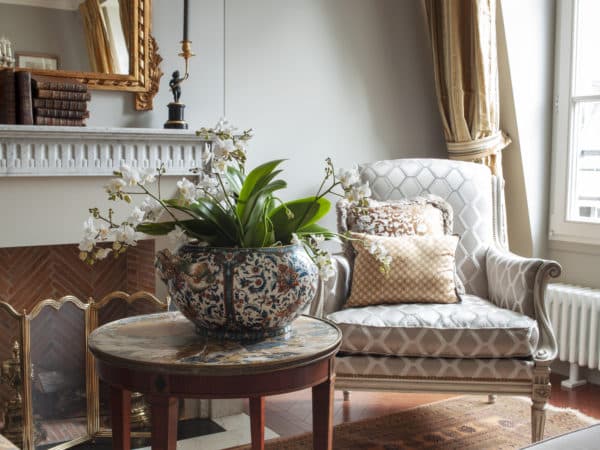 Located off the kitchen and adjacent to the living room, the dining area is a high traffic area connecting the living room to the kitchen. MRL Design Studio had to find the perfect table for this space. This posed a challenge because it had to be small, but functional. It had to be round and needed to expand in the event the clients had guests.
The clients gave MRL Design Studio carte blanche with a budget to dress up the dining room and make it “pretty”. The clients wanted to be surprised with seating, table linens, stemware, curtains and artwork. 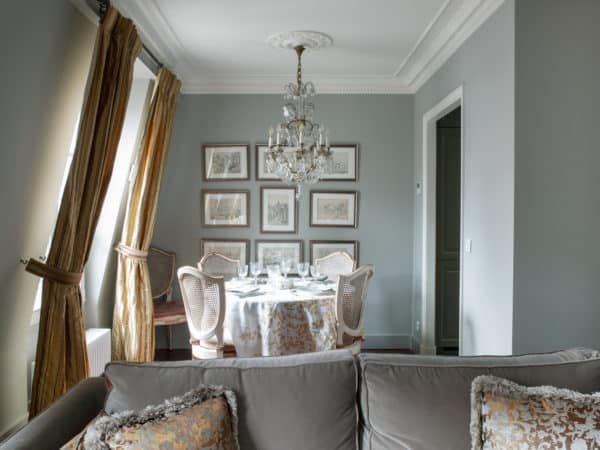 The floor plan and size limitations of the apartment made it tricky to place the kitchen where it would be accessible, but out of sight. The creative solution that MRL Design Studio arrived at was to integrate the kitchen into the hallway leading to the bedrooms. The clients selected traditional cement tiles during a quick birthday trip to Paris. The kitchen cabinets were designed to provide as much storage as possible and blend into the hall, almost like a butler’s pantry. 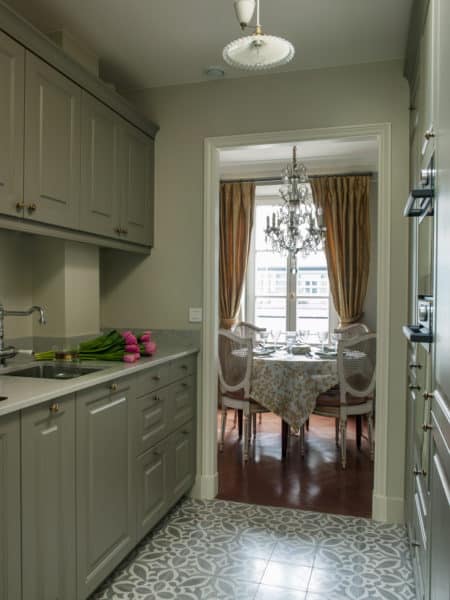 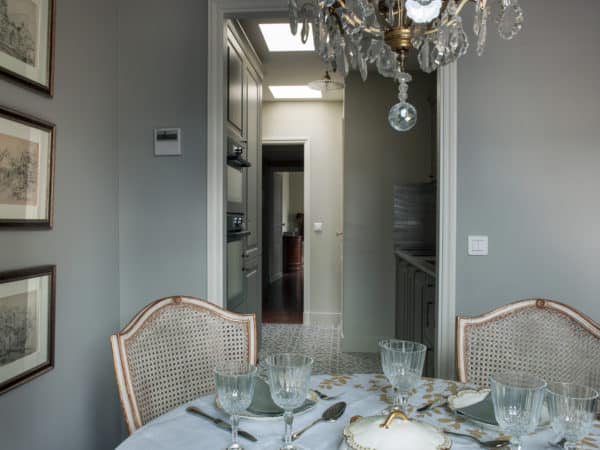 The clients had photos of marble bathrooms they loved, and the bathroom was designed to match. Contrasting marble and a retro shower fixture add interest. A wall mounted sink faucet helped save counter space.

It’s common in modernizing historical spaces to have to reinvent the space. In this case, the bathroom was created out of what was essentially a closet. It was long and narrow, requiring some technical thought for construction. However, everything is functional and the space does not feel cramped. In-floor heating in the bathroom adds a modern and luxurious touch. 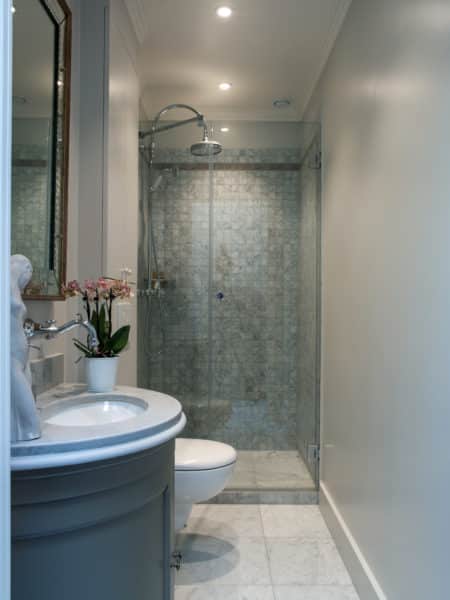 The biggest challenge was changing out the electric Sanibroyeur toilet for a regular toilet that would connect to the building’s main evacuation stack. The installation of a sewage pipe in order to install a toilet and connect all the apartment’s plumbing fixtures to the plumbing stack meant breaking through the floor between the 5th and 6th floor, connecting a pipe to the building’s main evacuation pipe located outside the apartment in the servant’s hallway/toilet. This technically required building approval, but since everyone in the building has a legal right to connect to the sewage evacuation pipe, the approval was just a formality.

The team approached the 5th floor owners to gain their permission, expecting resistance, however the neighbors were thrilled with the idea because the previous Saniboyeur toilet had leaked sewage into their apartment. They knew if the clients connected to the building’s sewage pipe it would rid them of future problems.

The process took one week, and the only added costs were to cover the cost of fixing any damage to the ceiling below.

In the bedrooms, space was created by custom building each bed. The master bedroom’s bed has storage under the mattress. Sconces free up space on small bedside tables. Custom cabinets installed in both bedrooms provide additional storage.  The master bedroom had a curved window, and MRL Design Studio designed a custom bench seat to go under it. 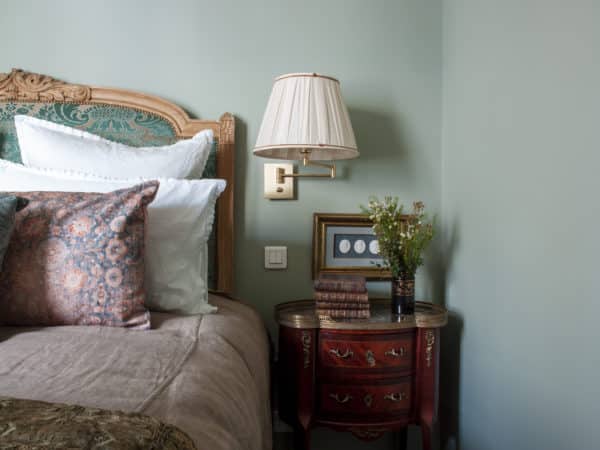 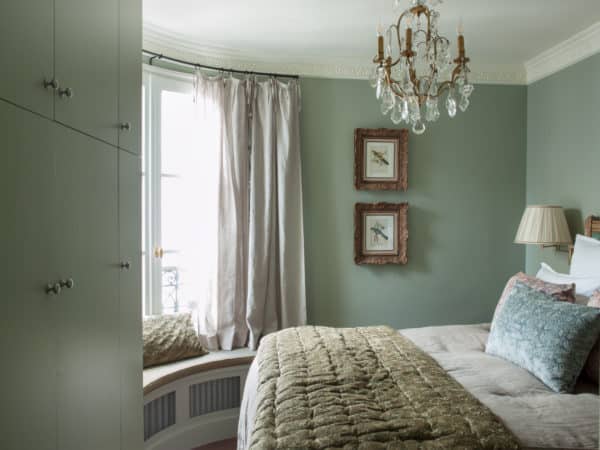 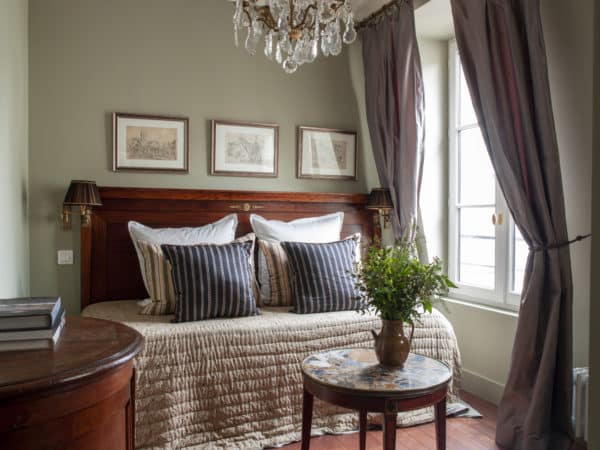 The property was originally purchased for 11,000 euros / m2, a further 3.5 square meters were added at a similar cost. The larger, completely renovated project with a more desirable, and relatively rare two bed / two bath configuration, is now conservatively worth 16,000 to 17,000 euros per square meter. 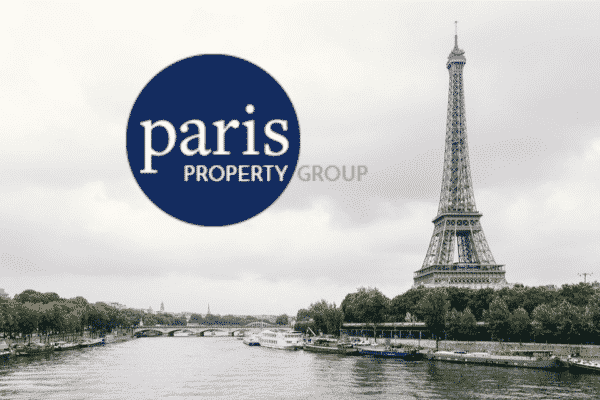 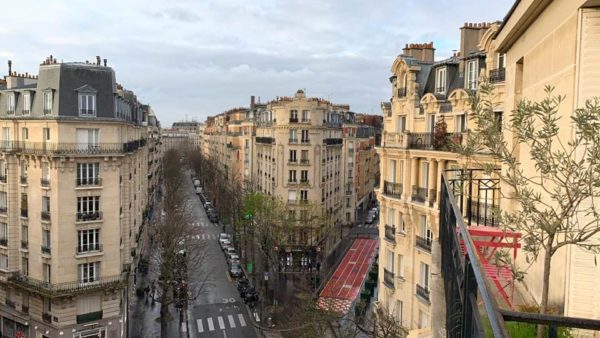 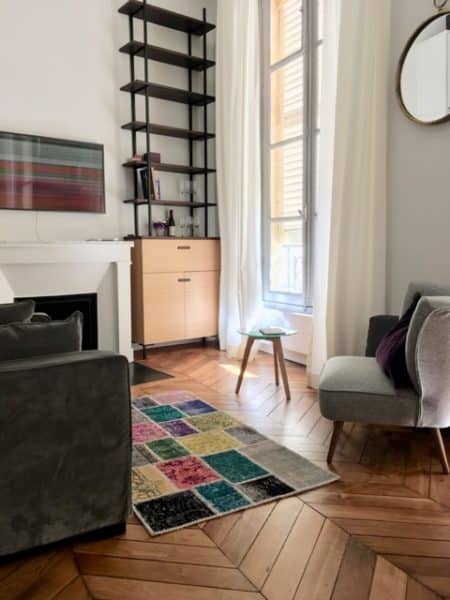