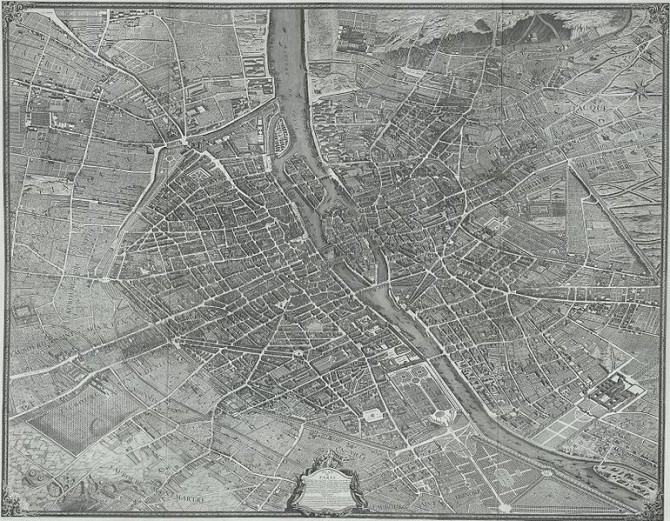 We posted recently about a series of interactive maps of Paris in the 16th century. Now move on a couple centuries and zoom in on the city as it was in the 1730s, 50 years before the French Revolution.

Michel-Étienne Turgot, then the equivalent of mayor of Paris, commissioned professor of perspective Louis Bretez to produce a bird’s eye map of the city. Turgot’s aim was to promote the reputation of Paris as a well-governed and modern city. It was a remarkably ambitious undertaking and took Bretez two years to complete. During that time, he was allowed unprecedented access to private mansions, normally walled-off from prying eyes.

The finished version shows 18th-century Paris in fine detail. Published in 1739, the map was vast and covered 20 sheets with an additional sheet showing how the grid fitted together. It looks towards the southeast, which is an unusual perspective, and covers an area roughly corresponding to today’s central 11 arrondissements (districts).

It may be closer in time, but this is not the Paris we know today. Parts of the city had changed since the 16th century but it was still a muddle of tortuous streets and medieval buildings. The orderly, spacious boulevards and elegant mansions that Baron Haussmann imposed on the old, chaotic street plan wouldn’t appear for more than a century.

Neighborhoods such as Montmartre that are now seamlessly part of the city were then separate villages. Buildings still appear on some of the bridges, such as the Pont au Change that we showed you in our previous post, but the Palais du Louvre looks more like it does today.

The map has two peculiarities. First, it’s drawn up according to ‘perspective cavalière’, i.e. two buildings are depicted as the same size, even if they are distant from each other. This map-making technique harks back to medieval methods. Second, the map shows no people or activity in the streets. It’s as if the inhabitants had been abducted by extra-terrestrials. In reality, Paris in the 18th century was just as crowded, noisy and foul-smelling as it was two centuries earlier. Turgot’s map presented a sanitized view.

Warning: this map is addictive!