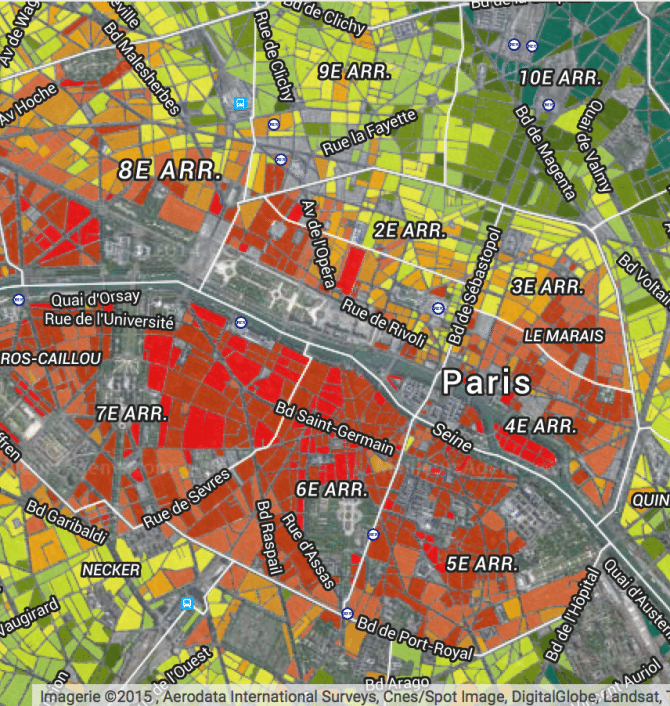 Apartment prices are rising again in the French capital, according to a price barometer published on 1st October by MeilleursAgents. It reveals that the increase mainly pertains to small apartments. The 74th edition of MeilleursAgents’ monthly price guide shows Paris resisting the slow price erosion befalling homes in the rest of France. According to the latest figures, prices in the capital have increased by 0.5% in a month, with smaller surfaces — one and two-bedrooms — seeing their prices rise by 1% in September and large surfaces — three bedrooms or more — experiencing a slight price drop of 0.1%.

These figures reflect the sales agreements — promesses de vente — signed between the 1st and 30th of September, sales which should materialize in the next three months. This trend confirms the increase of Parisian prices noted recently by the Paris and Île-de-France Notaires, as detailed in a previous Paris Property Group article. Sébastien de Lafond, CEO of MeilleursAgents, says in the report that “given the recent implementation of rent caps in Paris, one would logically expect a decline in prices of studios and small apartments in the capital,” however “the opposite has occurred with a surprise 1% increase over a month”. While it is too early to assess the real impact of rent control laws in Paris, which took effect on the 1st of August, many professionals believe that it will reduce demand from investors and therefore lower prices. The study notes that over 21 months — between 1st January 2014 and 1st October 2015 — the price of small Parisian apartments decreased by 4.2% (large apartments’ prices fell by only 3% in the same period) which suggests that investors had already begun to act in anticipation of the rent regulation several months ago. According to MeilleursAgents, “in the future, the price of small surfaces should drop more than that of large surfaces”. In the suburbs and other large cities in France, prices have continued their steady decline. The Seine-et-Marne department is the only other area with inner Paris to have resisted this trend. The rest of the Parisian suburbs have registered a 0.2% decrease, as have Marseille and Lyon. Bordeaux’ prices have fallen by 0.3%, and other French cities have seen similar drops in their real estate prices: -0.4% in Nice, Toulouse and Lille, -0.5% in Nantes and Montpellier and -0.7% in Strasbourg.   Photo credit: Pixabay / podlesakpetr