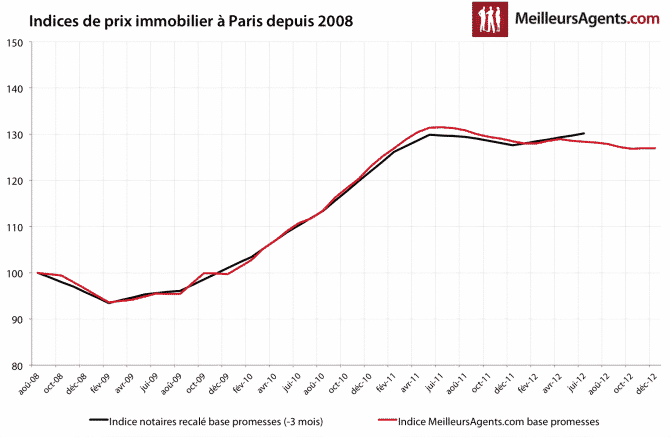 A buyers market this spring, but a stronger second half predicted.  MeilleursAgents.com, the notaires of Paris, and an article in Direct Matin yesterday, all have come out with their assessments of what transpired in the Paris real estate market during 2012 and what is predicted for 2013.  The market was relatively frozen during the fall of 2012 as buyers hoped for falling prices and sellers hoped to maintain the record pricing levels achieved at the end of 2011.   Since the beginning of the new year, however, the market seems more fluid and prices are decreasing somewhat.  This increased flexibility is expected to yield higher sales volumes and a stronger market later this year.

MeilleurAgents view Sebastien de Lafond, president and founder of MeilleursAgents.com says “In Paris, prices remained stable in 2012 (0.5% in one year) and declined only 1.5% from the peak in July 2011. In nearby suburbs, prices have increased slightly in the Hauts de Seine (+1.6%) and also decreased (-0.7% in Seine Saint Denis and -0.5% in the Val de Marne). Transaction volumes have largely decreased -25% year on year and 40% last quarter, approaching the lowest recorded levels of the late 90s. In this difficult market, time on the market almost doubled in one year from 34 to 64 days in Paris and 48 to 92 in Ile-de-France, ” he concludes.

What happened in 2012? The first half of 2012 was noteworthy for the wait-and-see attitude of buyers worried about the French presidential election, economic instability and rumors of a speculative pricing bubble in Paris real estate. After the elections, and because of the incredible succession of reforms proposed by the new administration relating to real estate, including a tightening of taxation, the situation worsened and the volume of transactions continued to fall. But prices have remained stable! Why? While there are more properties currently on the market for sale than usual for this time of year, many sellers have left the market.  The ‘opportunistic’ sellers have disappeared leaving only those sellers “forced” onto the market.  Buyers have not benefited as much from an imbalance in their favor during this downturn because the supply has decreased almost as much as the demand. Low mortgage rates in France also supported prices in 2012, falling from 3.90% to record low of 3.2% by year end (average rate calculated). The purchasing power of those few creditworthy buyers has increased and helped support prices. Finally, there was certainly a “quality effect” which occurred in 2012 with more attractive properties on the market, keeping prices indexes high. Conversely, the less attractive properties have become much more difficult to sell because owners not forced to sell did not want to lower their prices; as a result those properties languish on the market much longer than previously. In early 2013, with these prevailing conditions, the Paris real estate market is not a bubble threatening to explode. Trends recorded in 2012 will in all probability continue in 2013. Unless something unexpected occurs, borrowing rates should remain historically low, supporting property prices.  The supply of properties for sale will continue to decline; those not forced to sell will wait until the market improves, or at least until regulation and taxation become more favorable. Thus, transaction volumes will continue to decline to levels not seen since the late 90s while prices continue a slow decline (with the disappearance of the “quality effect” and the forced sale of less attractive properties).  All market indicators (price, volume of bids, number of transactions, length of marketing) will gradually deteriorate without explosion or sudden collapse.  Once the supply of motivated sellers that built up in 2012 has dwindled, the stage will be set for the market to strengthen again. Direct Matin  The article in Direct Matin yesterday quotes a Barnes study with some interesting facts:

The most recent sales numbers from the Notaires de Paris show prices up 1% overall for 2012, but while half the arrondissements showed a gain, the other half posted declines of up to 5%. Conclusion Current buyers stand to gain by scooping up properties offered for sale by motivated sellers at attractive prices.  While the current market turmoil has sidelined much of the demand, smart buyers (mostly foreign) are profiting by acting counter to the masses. This trend should continue through the spring months until the accumulated inventory of property that must be sold has been depleted. Kerstin Bachmann, a partner at Paris Property Group says, “We at Paris Property Group don’t think that this situation will last and our guess is that the market will have found a new stability by September 2013.  After that, sellers will have regained their traditionally strong position thanks to the poor investment alternatives available in the financial markets and the perennially high number of potential buyers.”  In the second half this excess supply should be absorbed, bringing the market more in balance and causing Paris real estate prices to firm up.