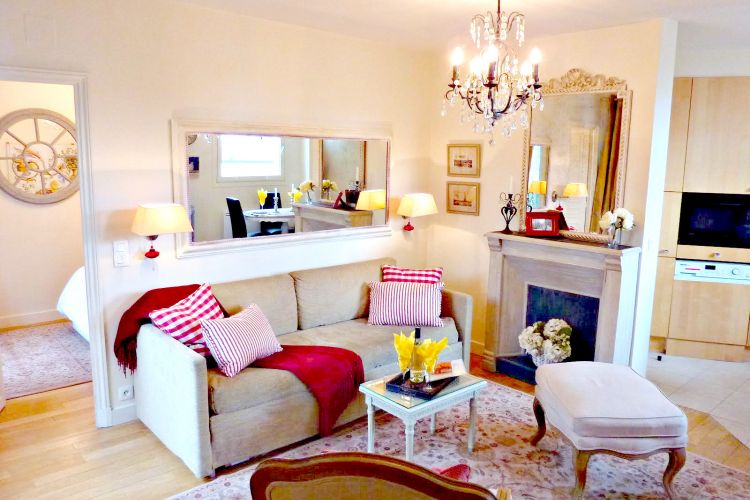 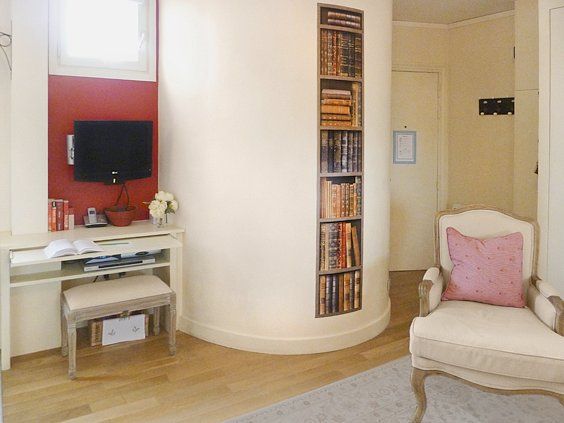 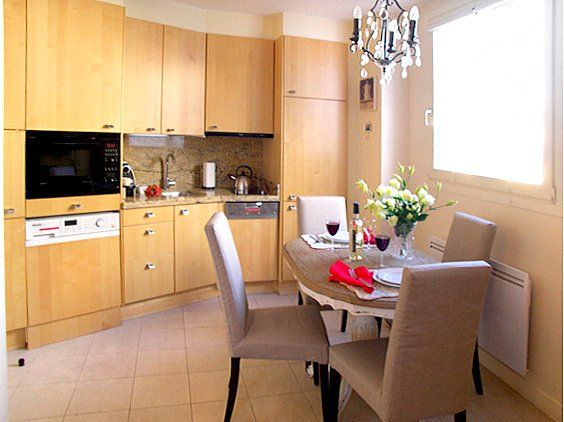 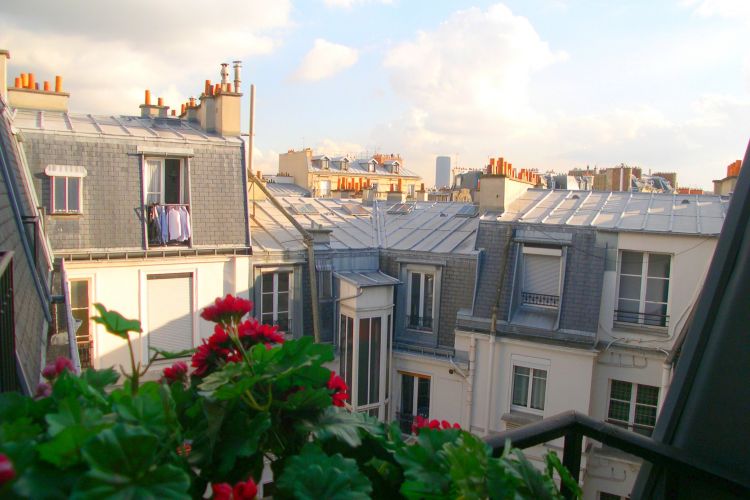 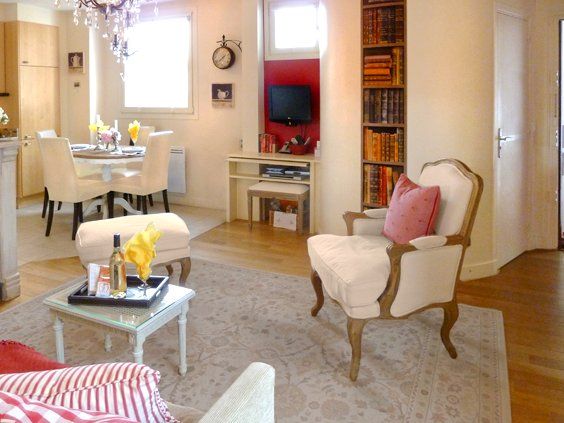 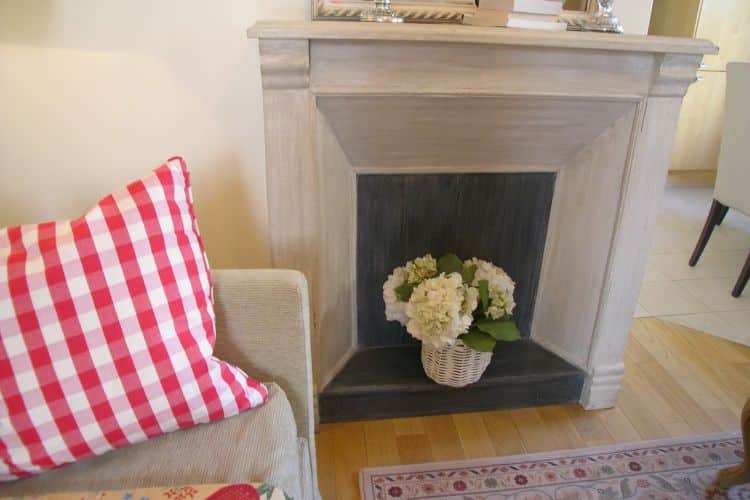 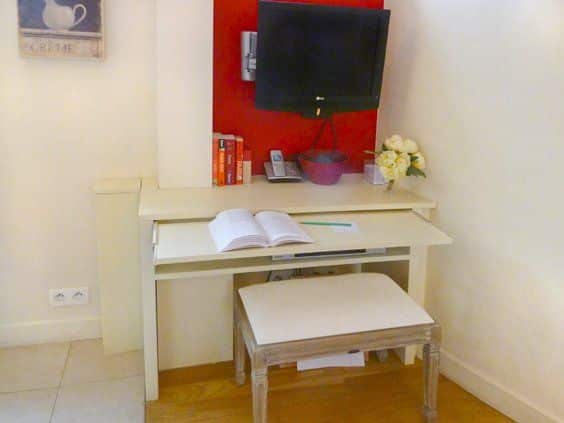 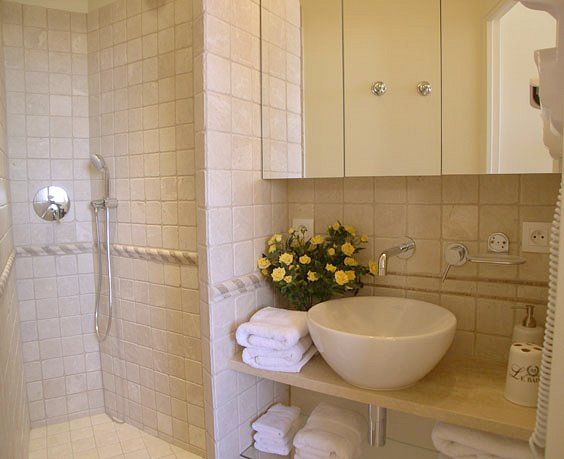 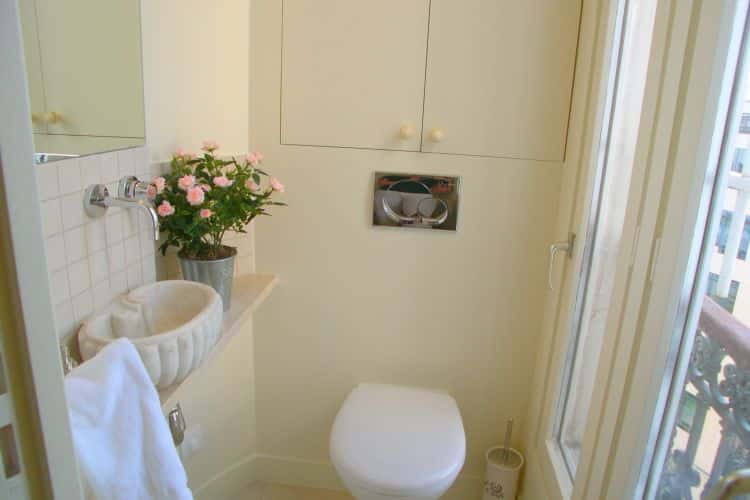 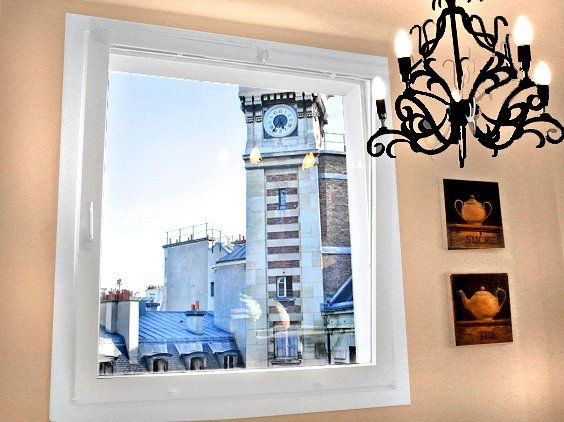 Ave Rapp, the Eiffel Tower at your doorstep ! Charming 1 bedroom apartment on the 7th floor with elevator and overlooking a quiet courtyard. Both the living room and bedroom have a small balcony with lovely open views on the roofs of Paris and lots of light.

The kitchen, which opens out onto the living room, comes entirely equipped with high quality appliances. The bathroom has an independent shower and was recently renovated, along with the rest of the apartment. The apartment is in an historic building with well-maintained common areas. Ideal for an investor, for a pied à terre, or for a first time buyer.

Quintessential Paris, the 7th is divided into distinct neighborhoods each with a different feeling. The areas near Champs de Mars and bordering the 6th tend to be more highly prized, while the area near the 15th can feel very residential and quiet. On a sunny day, the 7th is perfect for strolling through the gardens of the gorgeous Rodin museum, or sitting on the Champ de Mars in the shadow of the Eiffel Tower, enjoying a picnic. The charming rue Cler abounds with produce, meat, cheeses, breads, spices and more are on offer, flanked by plenty of sidewalk cafés. The 7th is also home to many government offices, ministries and the Assemblée Nationale, seat of the French parliament. Sought after for it’s central location, proximity to parks and it’s spacious feeling, real estate in the 7th is the second most expensive in Paris, right behind the 6th. The Carré des Antiquaires, north of the Boulevard Saint Germain toward the Seine, is one of the most coveted residential addresses in the city. 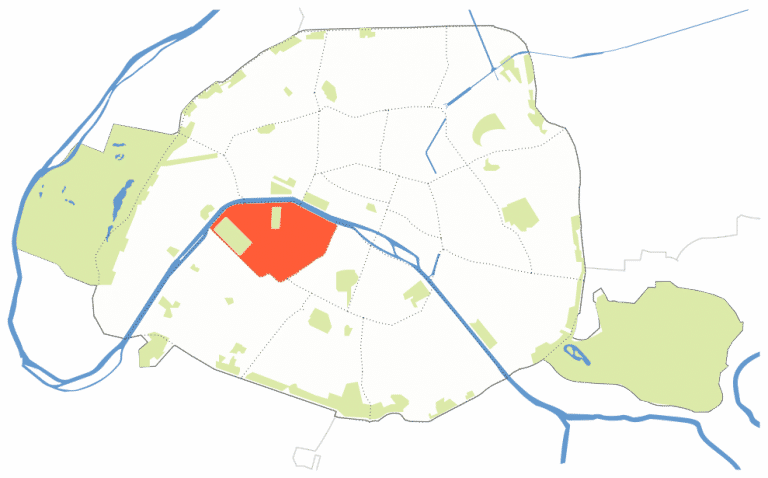 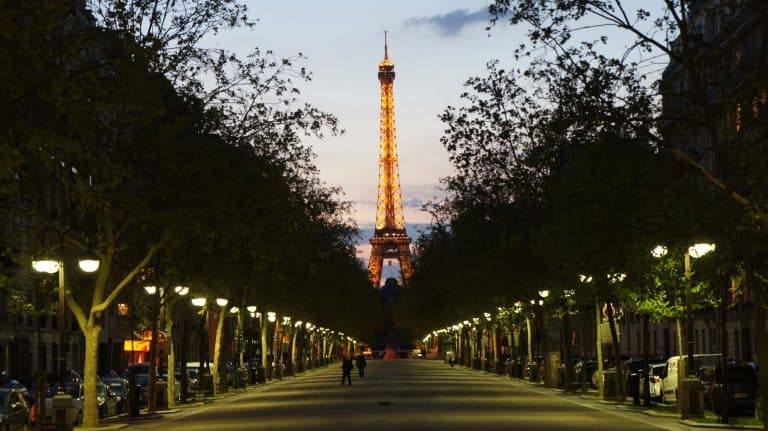 Stratospheric prices are becoming the norm in the 7th due to sustained interest by both foreign investors and residential buyers, and a general shortage of apartments on the market. Prices in the 7th are among the most expensive of anywhere in Paris, behind only the 6th.  The area around the Champs de Mars, Invalides and rue Cler are pricey, especially if they have a view.  The Carré des Antiquaires area bordering the 6th is where you’ll find some of the steepest prices.

Get to know the 7th arrondissement

By 1853, the city had over 1 million people. Only one house in five had running water; of these, most only had plumbing on the ground floor. Napoleon III tapped Baron Haussmann to renovate Paris. The goal was to ease traffic by creating large boulevards and to promote hygiene by integrating a clean water and sewage system, as well as to house the burgeoning upper class. Featuring an intricate cut stone façade, the common layout in a Haussmannian style building is large apartments (200 to 300 m²) with multiple salons de reception, marble fireplaces, chevron parquet floors, high ceilings with elaborate crown moldings, and a grand stairwell with an elevator to the side rather than in the center. Found around the grand boulevards in the center of Paris and in the 8th, 10th, 14th, 15th,16th, 17th, 18th, 20th arrondissements.

Art Nouveau was a brief fin-de-siecle architectural trend lasting approximately from 1893 to the beginning of World War I. Best known for the style is Hector Guimard. His curving “cigarette smoke” line had already made waves on buildings in the elegant 16th arrondissement, but his Art Nouveau was motivated by a social conscience, much like the Arts and Crafts Movement in Britain. Hired in 1896 to design the metro entrances, he leapt at the chance to design something beautiful for the masses. But when Guimard unveiled his brilliant Métro work in 1900 everyone hated it. The shiny green color was considered unpatriotic, too close to Prussian green, and the writhing insect-like metalwork was much too weird for the public. Time has defeated his critics however, and Guimard’s Art Nouveau Métro entrances have become one of the city’s trademarks.

At the end of World War I, Paris was exuberant—the world had just survived “the war to end all wars. High-speed ocean liners crisscrossed the Atlantic; Surrealism shocked the art world; radios poured out jazz music. The Modern Age had arrived. Trying to express this freedom and movement, architects responded to the jazzy rhythm with angular shapes reminiscent of the new cruise ships. World War II put an end to Art Deco’s optimism and the less-flamboyant lines of pure Modernism took over. Factories from this time have converted into residential use. Turning a loft into a livable space requires consulting an architect. In general, remodeling the interior of a loft will not require approval from building co-owners but any changes affecting the exterior of the building will need building co-owner and city approval.

No reservations and no disappointments; everything at Christian Constant’s casual restaurant is excellent and worth the wait, which could be long if you arrive after 8pm.  Most dishes come in a Staub cocotte and the style is traditional French done elegantly but low key. Alternatively, for a real treat, try Constant’s flagship Violon d’Ingres or his more casual Café Constant, both next door.

With two Michelin stars and the title of Top Chef France under his belt, chef Jean François Piege, together with his associate Thierry Costes, bring you a modern brasserie in the Thoumieux Hotel. Surrounded by pop colours and plush seating, the relaxing ambiance is complemented by the creative French cuisine. 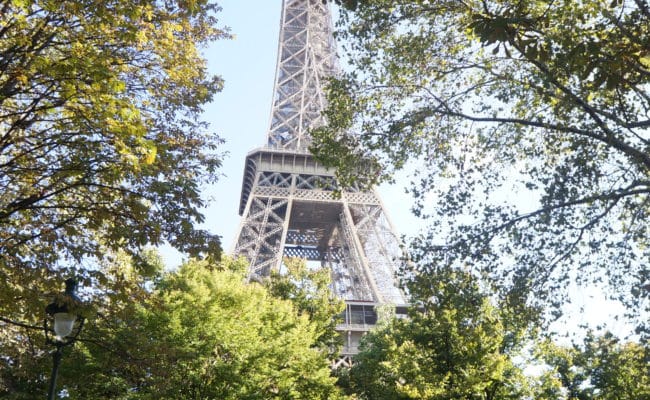 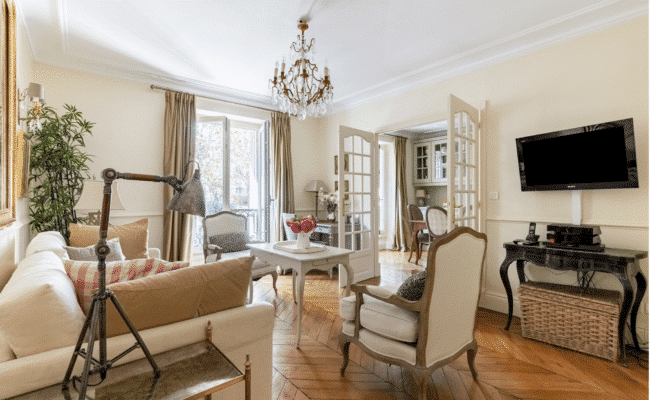 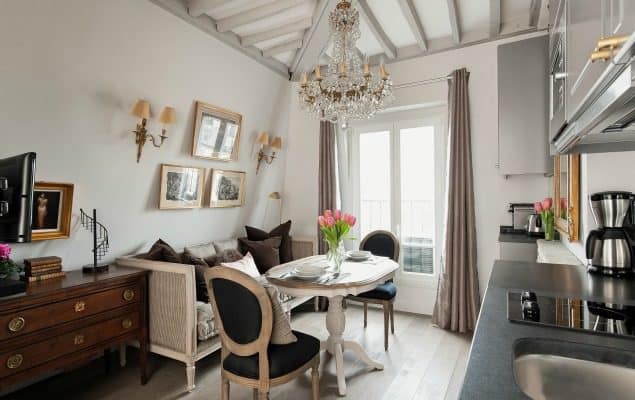 Cremant de Bourgogne
75007 Paris
Charming, well-appointed pied-a-terre studio apartment on the 5th floor (with elevator) with an Eiffel Tower view, in one of the best neighborhoods in Paris.
€ 89,000   Fractional / Shared Ownership 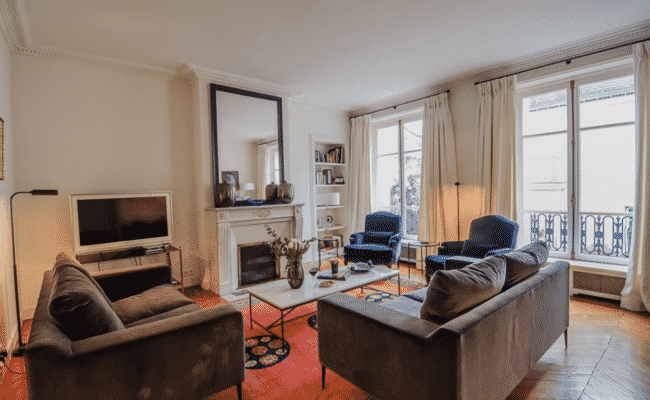 rue de l’Université
75007 Paris
Three bed, two bath: Fractional property located in the heart of the exclusive 7th arrondissement, the building is one block from the Seine and nestled in between a private mansion, a cobblestone courtyard and the lush garden of a government ministry. Spacious entertaining areas and top of the line modern amenities mean the property can comfortably accommodate six or feel just right for two.
€ 435,860   Fractional ownership property - 6 week share
See All Properties