In Paris, real estate prices fell in all arrondissements in 2021

The fall in prices is now widespread in the capital and stocks are increasing. Small spaces are the dwellings that fall the most.

According to the latest study published by the real estate valuation platform Meilleurs Agents, there is a general 1.7% drop in Parisian prices in all arrondissements, over the year 2021. Only the 4th arrondissement is the exception (a very slight drop) which confirms the rule: +0.3%, in one year. It is the 3rd arrondissement of the capital which recorded the largest drop: -3.3% in one year. “The districts in the center usually drop the most because they are the most expensive districts and therefore the first to lose attractiveness when households have other properties on the outskirts,” explains Meilleurs Agents.

“For me, the strongest sign of the disenchantment with big cities comes from the capital itself. In 2021, Paris is no longer successful. Whereas just eighteen months ago, it was on the way to reaching 11,000€ per m², it ended this year at less than €10,203 per m², i.e. -1.7% variation on the year 2021”, says Thomas Lefebvre, scientific director of Meilleurs Agents. 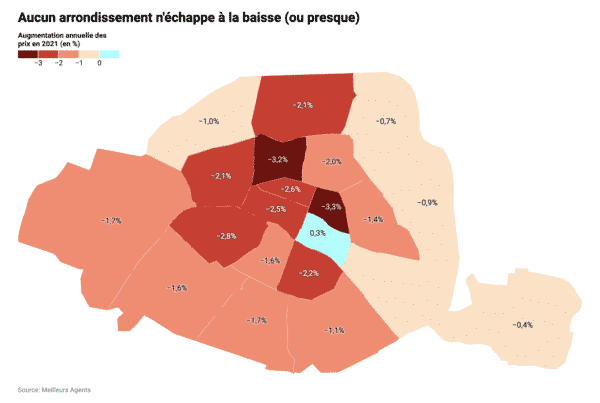 A decline that is not intended to last?

Same observation on the side of Fnaim: National Real Estate Federation, in its study of the real estate market in October 2021: “Prices are stabilizing in Paris (-0.4%), after having increased sharply from 2015 to 2020. We are therefore witnessing a change in the morphology of the market, a redistribution of price dynamics. The dynamic of Paris has come to a halt and small and medium-sized towns are much more dynamic than before the crisis.”

This fall in prices and this lack of love are necessarily accompanied by an increase in the stocks available in the capital. The company Yanport, a specialist in real estate data which scans the classifieds on the various portals, shows that home inventory has jumped by 30% on average in Paris (see the map below, by arrondissement) while the increase is lower in Île-de-France: from 6% in Seine-et-Marne to 25% for Yvelines. Same type of evolution for the duration of advertisements which increased by 50% in Paris while in the other departments they increased by at most 28% (Hauts de Seine). 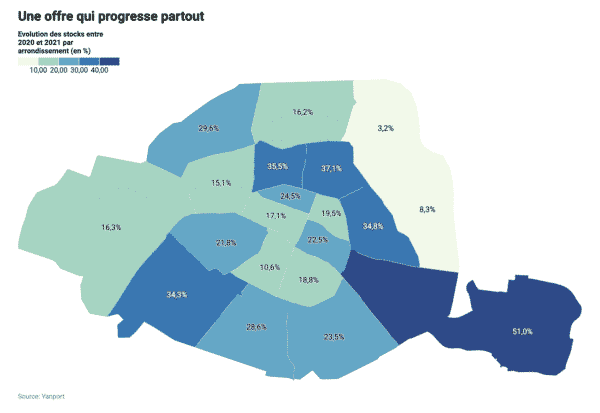 The big winners of this development would be the territories located in the outer suburbs such as Seine-et-Marne and Val-d’Oise, which have recorded a significant increase: +6.5% in 1 year, according to Meilleurs Agents. For its part, Yanport reaches similar conclusions with even greater increases (on displayed prices): + 8.93% for Seine-et-Marne, + 6.97% in Val-d’Oise and all of even +6.55% in Val-de-Marne and +6.31% in Essonne. In detail, taking into account the typology of housing (see table below), Yanport’s figures confirm that it is small spacess whose prices have fallen the most in Paris (-2.55% for both the  two bed-rooms and -2.32% for the studios/1 bedrooms) while in the rest of Île-de-France the biggest increases concern the largest dwellings: 5-bedroom apartments jumped by 12.16% in the Seine-et-Marne and 4-bedroom apartments by 12.13% followed by 5-bedroom apartments and more in Yvelines (+11.79%) and Val-d’Oise (+11.7%).

Small spaces down in Paris, large spaces up in the outer suburbs

The Fnaim nevertheless remains convinced that this drop in prices is only temporary: “However, Paris retains many assets, and should not see its prices drop significantly: coming recovery in tourism and purchases by foreign customers, economic and cultural attractiveness, structurally limited new supply, etc., in addition to the favorable fundamentals of the housing market.”