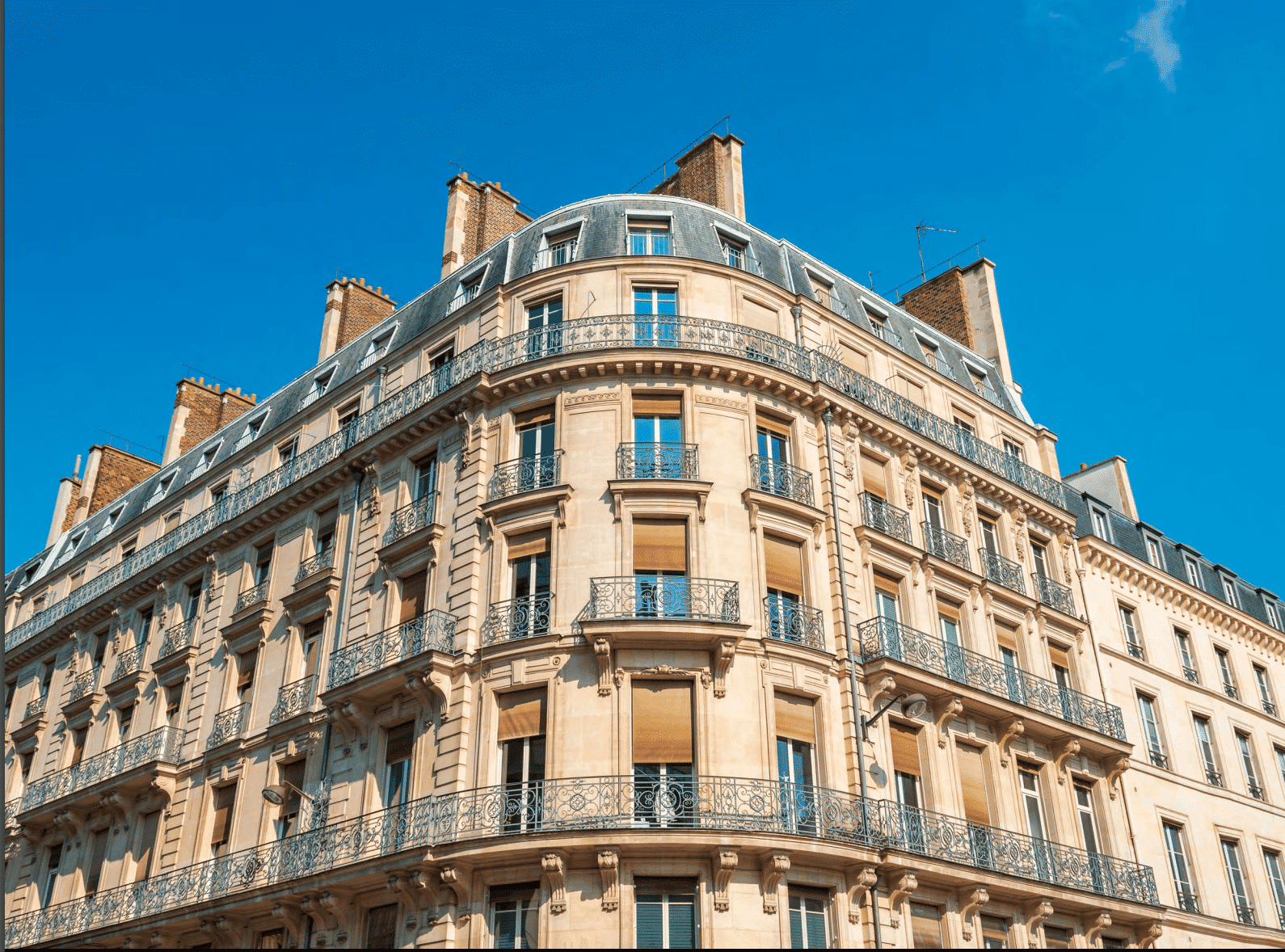 In terms of transaction volume, with a forecast of around 1.1 million sales made by the end of the year, 2022 should come close to the historic record reached in 2021. Falling below one million transactions seems unlikely despite the news and the controversy around the rate of sale cancellations. This scenario would imply, in fact, that a quarter of the promises of sale would be canceled, before the final signing of the deed of sale, by the end of the year – and this while the annual average of canceled sales is peaking, usually between 2% and 3%.

As for prices, the market also remains generally dynamic with an average increase of +5.7% in France over the last 12 months. The new post-Covid real estate geography continues to drive the market with, among other effects, rural areas growing by +8%. 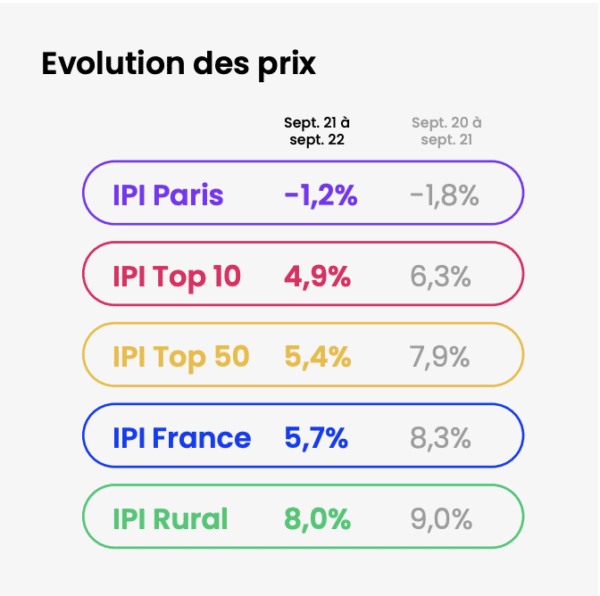 As for the 11 largest cities in France, the slowdown observed from the first confinement is still relevant. A few cities such as Paris and Lyon have started to bounce back since 2021. Also Lille, Nantes and Bordeaux, which are experiencing a positive but lesser evolution compared to the trends of recent years. Conversely, Marseille and Strasbourg remain the winners of the real estate market in these last 2 years, with significant increases, close to +9%. 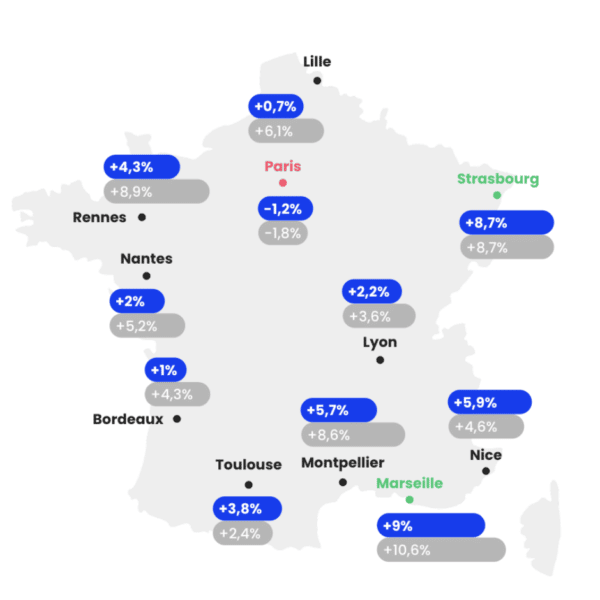 The appetite of buyers for houses, another major post-Covid trend, remains very real, even though it has begun to slow down. House prices thus saw an increase of +6.5% (compared to +9.7% last year). A deceleration that narrows the gap with apartments, up +4.7% (against +6.5% in 2021). A craze which explains the context of shortage on the supply side, since in four years, the stock of advertisements for houses for sale has fallen by -54%, and by -28% for apartments.

The recent rise in interest rates (1.9% on September 1) that began at the start of the year, has given rise to new questions, even concerns, in particular because the increasing should continue.

It is undeniable that demand will be affected by rising interest rates. To measure the effect, the calculation of the affordability ratio* (= the share of a household’s income which is devoted to the repayment of the loan) makes it possible to measure the impact of the rise in rates on the solvency of a representative household from each market.

Assuming the rate reaches 2.75%  at the end of 2022, the average affordability ratio in France would remain very good, at 30% and 60% of large cities would remain below the 35% mark.

If the worst comes to worst

If the interest rate reaches 4%, the affordability ratio could approach the threshold but would remain acceptable at 34%. Demand would still be considered solvent in 1 out of 2 major cities.

“The average affordability ratio in France should not suffer too much from a more marked rise in interest rates. On the other hand, it is the territories for which the affordability ratio is the highest, therefore the most expensive cities, which will be the most impacted by this increase. Demand should therefore be more strongly affected in Paris, Cannes, Antibes, Nice and La Rochelle” analyzes Thomas Lefebvre, Scientific Director Meilleur Agents, SeLoger (Group Aviv).

There is an overall shortage of supply but not in all of France. Different realities exist depending on the territory. The shortage is exacerbated for the rural world with stocks at 50% since 2019. However, the urban markets such as in the Top 10 and Top 50 cities see supply gradually being rebuilt. At the other end of the spectrum, the Paris market is in a situation of oversupply at its highest compared to the last 4 years.

In the 51 largest cities in France:

The supply shortage situation should cushion the slowdown in prices that could result from the drop in demand, caused by the rise in interest rates. This should be particularly true for markets that have become attractive with the “new” real estate geography that has emerged post-Covid, namely the rural market and most medium-sized towns. Conversely, markets with oversupply (Paris in particular) might not be spared from the drop in demand and could see their prices fall. 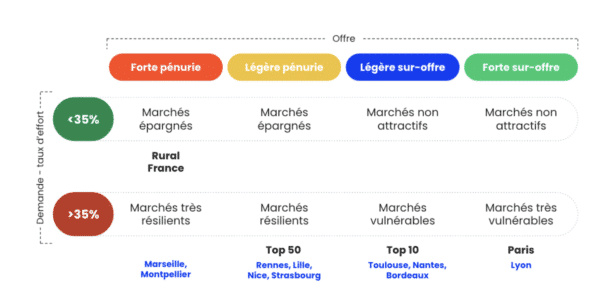 Predictions for the next year

Within a broader economic framework, we make 3 main assumptions for the next 12 months:

However, there are several risk factors that we should keep a close eye on:

“Under these assumptions, it seems quite clear that the real estate market should experience a slowdown in terms of prices and transaction volumes compared to previous years. Thus, over the next 12 months the French real estate market prices should increase by +3%. The volume of transactions should drop below one million sales with 950,000 transactions over the next 12 months,” adds Thomas Lefebvre. 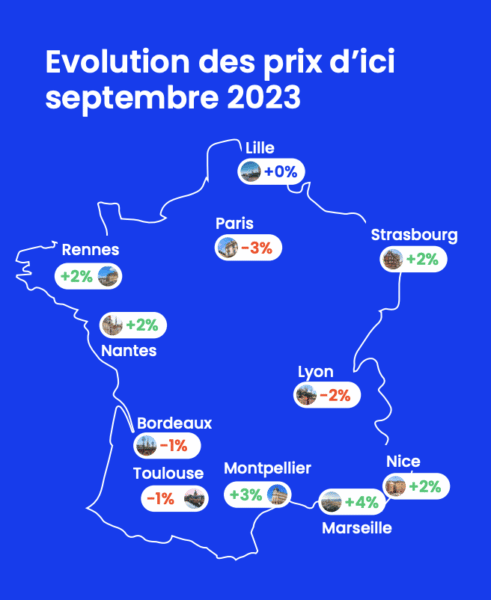 Realities will be different across France

For the Paris market, a drop of -3% is expected. By September 2023, its real estate price should therefore approach the symbolic bar of €10,000/m².  The 10 largest cities in France should see their real estate prices increase slightly by +1%, while the 50 largest cities in France will increase by +3%. The market will therefore remain in this post-Covid hierarchy with medium sized towns increasing more quickly than most major French cities. The rural areas will, following this same dynamic, be stronger, with a greater increase of +5% to come. We will thus observe in the next 12 months a positive note but the real estate market is sure to be  less robust than it has been. 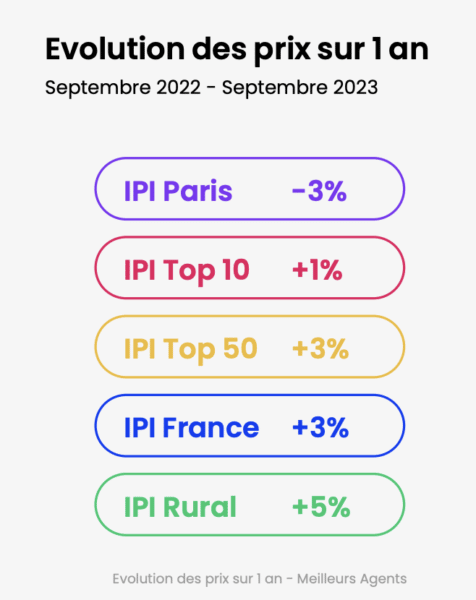