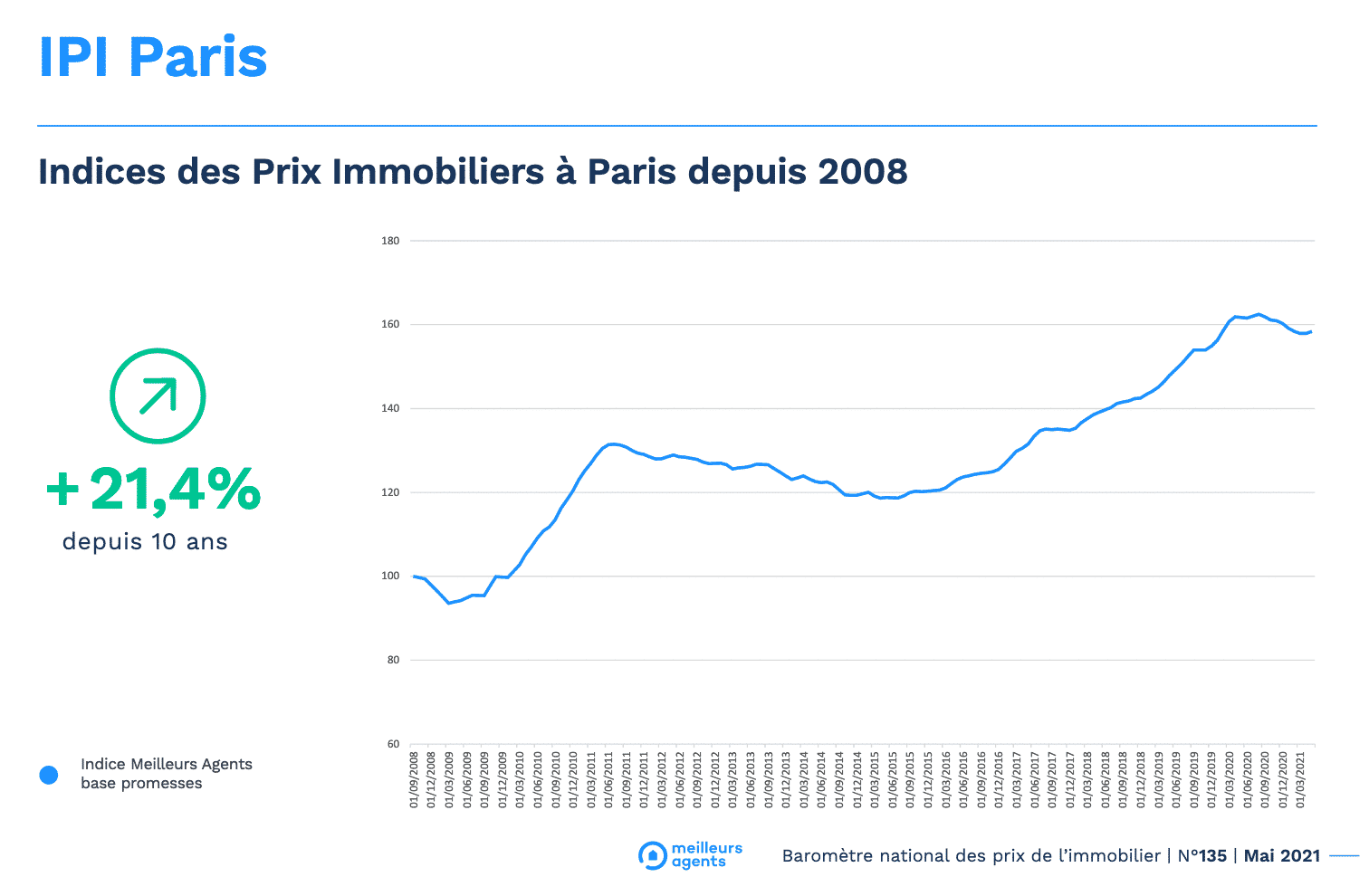 The French real estate market heats up with the weather

A market that rises with the temperature

Spring keeps its promises! Despite the announcement at the end of March of a new lock down, the upturn in activity traditionally observed in the real estate market with the return of good weather has not been lacking. Thus, the month of April showed good momentum. Helped by the new tools put in place by real estate professionals (electronic signature, virtual visits, etc.) since the start of the pandemic and by the continuing interest of buyers and sellers who are returning to the market in greater numbers. 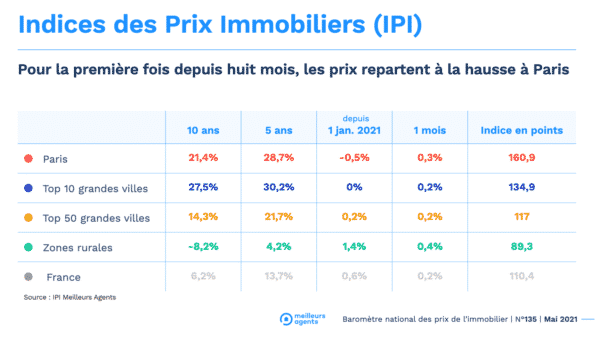 While this phenomenon is still fragile, it is already being felt in the Real Estate Tension Index of Meilleurs Agents. While most of the eleven largest cities in France had around 5% more buyers than sellers at the end of 2020, this ratio has now almost doubled. This attests to an admittedly slow but very real rebuilding of the numbers of buyers.

The main municipalities affected by this upturn are Montpellier (10% more buyers than sellers against 4% in January), Rennes (9% against 0%) or even Toulouse (12% against 7%). buyers are more enthusiastic, and also less wait-and-see. Thus, for the first time since January, average sales times on the market are falling in the big cities (-7 days). In Marseille, for example, it takes 12 days less than at the start of the year (60 days versus 72) to complete a transaction. Same observation in Nice, Nantes or even in Lille (-11 days). As a result: this is reflected in prices (+ 0.2% nationally). So much so that the capital and six of the largest metropolises in France are on the rise again (+ 0.6% in Marseille and Nantes, + 0.5% in Lyon and + 0.3% in Nice, Strasbourg, Lille and Paris) 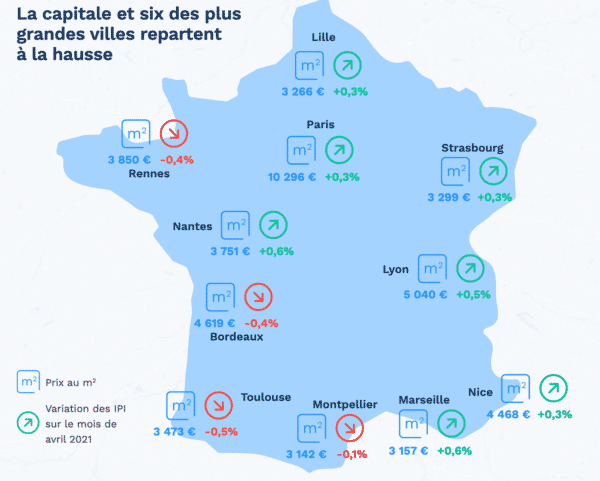 The horizon is clearing up for a restart of activity

Though tentative, the encouraging signs observed on the market since the beginning of the spring (rapid completion of projects, return of buyers, rise in prices, etc.) point in the direction of a restart of real estate activity. While the Covid-19 epidemic is still far from over, uncertainties about how the situation will evolve appear to be receding.

The acceleration of the vaccination campaign suggests a light at the end of the tunnel with collective immunity that could be acquired before the end of the year, marking a return to normal life. From catastrophic a year ago, macroeconomic forecasts now appear much less gloomy.

Indeed, the safety nets put in place by the government seem to have borne fruit. While the Banque de France predicted at the beginning of last summer an unemployment rate of 12% in 2021, it has now reduced its forecasts to 9.5% for the end of 2021. That means 750,000 French people who will be spared and who will keep their jobs and access to real estate credit. Especially since the level of borrowing rates remains very attractive. With an average level of 1.11% in March 2021 according to the Housing Credit Observatory / CSA, mortgage rates have indeed returned to their historic lows of December 2019.

In addition to this solvency effect of rates, the savings accumulated during the crisis could allow households to increase their personal contribution and therefore to access loans more easily. The impact of the current crisis on income and access to credit may therefore turn out to be less than feared.

Nonetheless, two clouds threaten the restart of the housing market and cannot be ruled out today. The first is health. The spread of the variants and their possible resistance to the vaccine could delay the return to normal life. The second concerns economic recovery. Even though it appears to be in remission, the French economy is still on a drip. Restarting the economy remains a major challenge once the support measures are lifted. 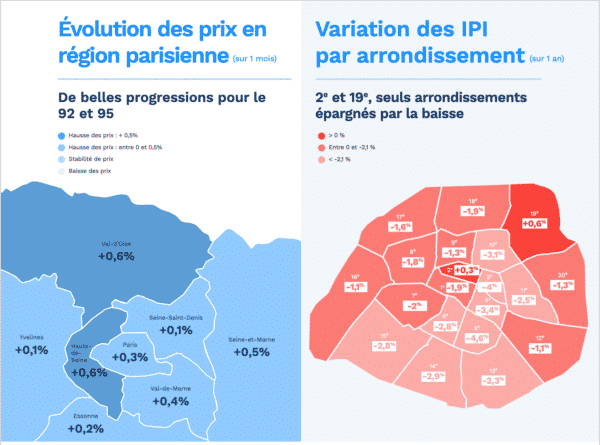 Finally, the recovery in Paris?

After several months of gray, the capital finds some brightness. For the first time in eight months, its prices are rising again (+ 0.3%). The number of buyers in the Capital is increasing again ( 10% more buyers than sellers against 5% at the end of December). As for the average transaction times, they are getting shorter (49 days on average, or 4 days less than at the end of 2020). , however, the situation is far from comparable. The reason ? Paris is the only one of the largest metropolitan areas in France to have recorded a significant drop in prices over the past year. While it suffered a decline of -2.1% in its prices across all districts, Strasbourg saw its prices rise by + 5.7%, Nantes by + 5.3% and Rennes and Marseille by + 4%. And even agglomerations in the red like Bordeaux (–0.6%), Toulouse (-0.6%) and Montpellier (-0.8%) held up much better.

The past month marks the end of the decline in Paris since the start of the school year? Not so sure. Because, the main reasons for this fall in prices (Parisian life at half mast, disenchantment with small property sizes, post-confinement “leak”, very low real estate purchasing power) are still there. The prospect for Paris to resume the bullish wave and to compensate for the decline of the last 8 months, is based on a frank economic recovery which would mark the end of the wait-and-see attitude of prospective property applicants.