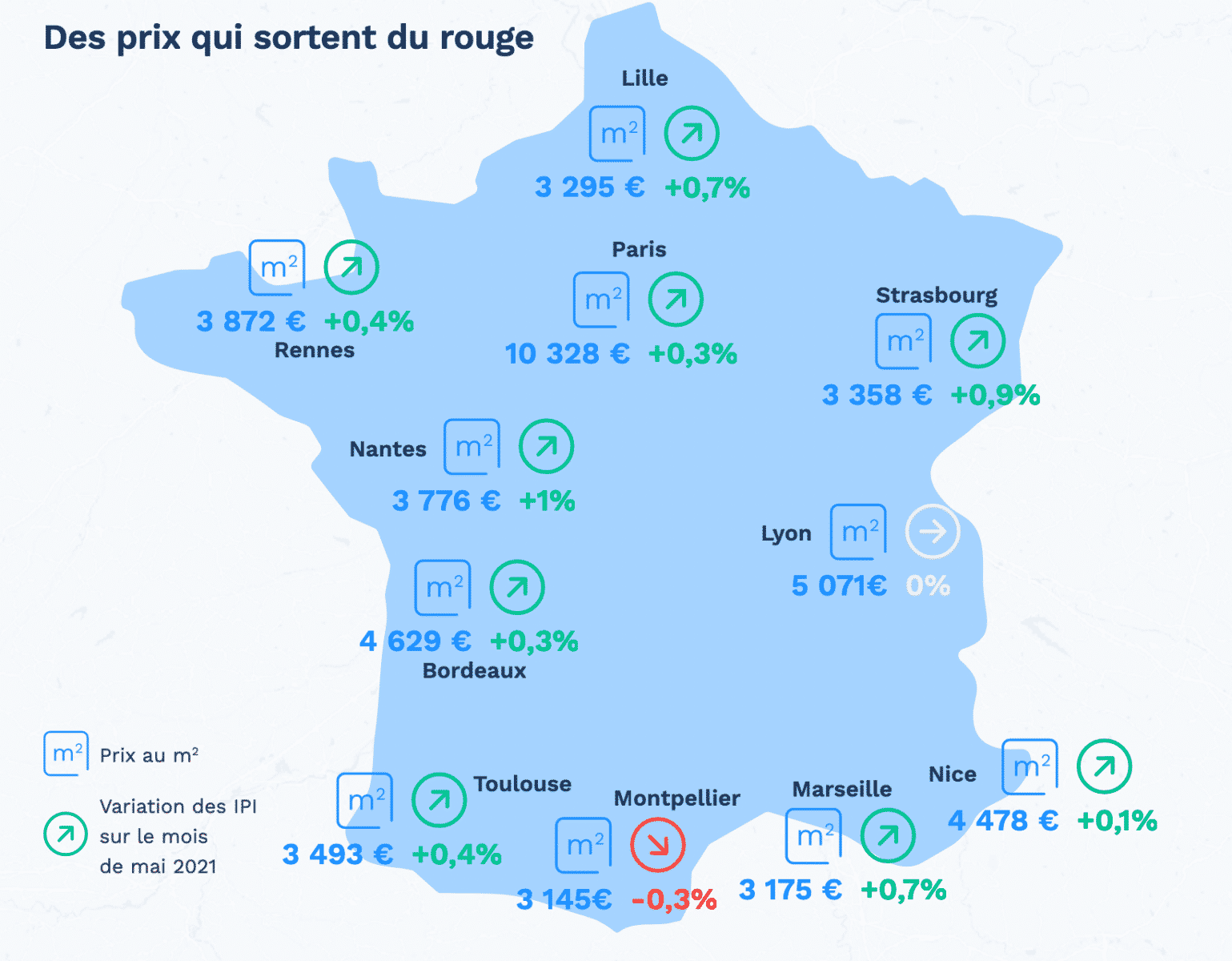 For months we haven’t seen  gains like this! After a year marked by a lack of clear trends in the real estate market, dynamism is once again evident. Since the last Meilleurs Agents barometer, ten of the eleven largest cities in France have returned clearly to the green (+ 0.4%). And, some of them even posted remarkable performances. Among the big winners of spring 2021, Nantes (+ 1%), Strasbourg (+ 0.9%), Lille (+ 0.7%) and Marseille (+ 0.7%) are back to their price dynamics before the health crisis. So much so that over the past three months, these municipalities have seen their prices jump by 1.6% on average (1.6% in the Marseille capital, for example, and up to 1.9% in the prefecture of Bas-Rhin), slightly behind this top quartet, Toulouse (+ 0.4%), Rennes (+ 0.4%), Bordeaux (+ 0.3) and even Paris (+ 0.3% ) also seem determined to erase the declines recorded since the start of the coronavirus epidemic.

If the City of Light still has room to forget the some 500 € / m² lost in the space of a year (-1.7% since last June), Toulouse and Bordeaux have for their part succeeded in erasing their variations in prices of the last months (respectively, 0% and -0.1% in one year). As for Rennes, it took a bite out of it (+ 5% in one year). The only exception to this rising price recovery: Montpellier. Lagging behind other large French cities (-0.3% in one month, -1% over the past year), the Hérault prefecture could nevertheless soon follow the movement thanks to an increasing number of buyers, like the rest of France.

A market under tension again

The Real Estate Tension Index (ITI) of Meilleurs Agents attests: the price dynamics observed at the end of spring should continue during the summer. The cause is a real estate market in the process of tightening up in favor of sellers. Public holidays and other May long holiday weekends have not in fact slowed down the enthusiasm of homeowners who are returning in force to the market, driven  by the gradual decline in uncertainties about the health and economic development of the country (acceleration of the vaccination campaign, effectiveness of support measures, good performance of the job market, etc.). In fact, the upturn in demand already underlined by Meilleurs Agents in recent months is being confirmed.

Toulouse, for example, has seen its number of potential buyers doubled since January (7% more buyers than sellers at the start of the year compared to 14% currently). The same goes for Bordeaux, where the proportion of buyers has gone from +5% to +10% in just five months. Better yet, apart from Nice, there are now at least 10% more buyers in all the major cities of France (Paris included) than sellers (11% in Lyon, 12% in Nantes, 13% in Montpellier and Rennes, 14% in Lille and up to 22% more buyers than sellers in Strasbourg). 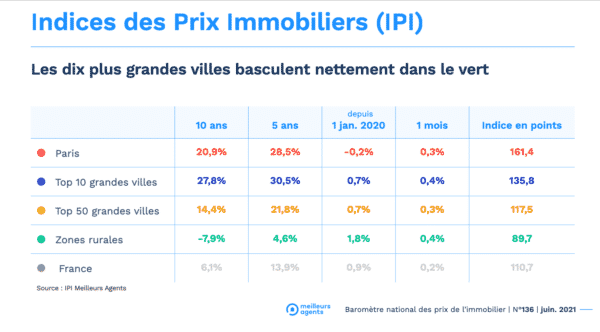 Sales faster than before the health crisis

Other proof that the market is again under tension: the sales times are experiencing a clear acceleration. Today, it takes an average of 10 days less than at the start of the year to complete a transaction. And none of the eleven largest cities in France (with the possible exception of Paris, which maintains the same pace) is spared by this phenomenon. While they have shortened since January by 7 days in Rennes, 10 in Nice, 11 in Bordeaux and 12 in Toulouse, average selling times have literally melted in Marseille, Nantes and Lille (-15 days). Even more striking, nearly half of the large French metropolises saw their sales lead time fall around 42 days (40 days in Nantes, 41 in Strasbourg, 43 in Rennes, 44 in Lyon, etc.).

A level never reached even in 2019; when the stock of applicants for property was at its highest. By way of comparison, it took an average of 65 days in June 2019 to sell a property in Lille compared to only 43 today The main explanation for this real buying frenzy: the continuous flow of buyers arriving on the market for several months. More numerous buyers for fewer properties for sale:  buyers face increased competition forcing them to make a much faster decision. But not only that… Salespeople, for their part, are also tending to accelerate the movement. As before the Covid-19 crisis, there is no longer any question of being too greedy or refusing a proposal in the hope of a better offer. In short, they no longer have to wait. 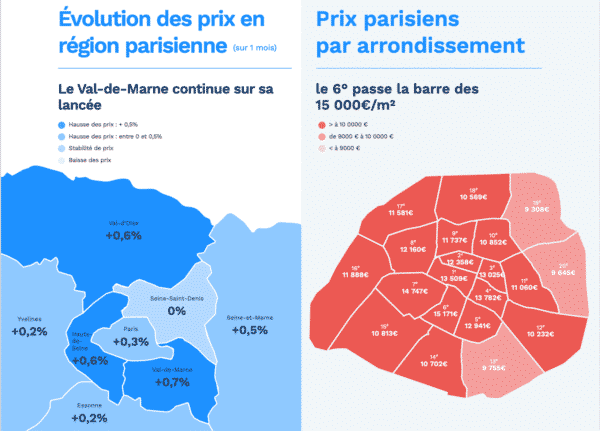 Strasbourg is not experiencing the crisis

The coronavirus pandemic has had no effect on the Strasbourg real estate market. Quite the contrary! With an 8.2% increase in its prices in one year, the capital of the Grand Eastern region has indeed experienced the largest annual increase of the eleven main population centers of the Hexagon. It must be said that unlike the vast majority of its national counterparts, the city, ranked fourth among the most attractive French metropolises (from 500,000 to 1 million inhabitants) by the 2020 Arthur Loyd Barometer, has not seen its stock of buyers melted even at the height of the epidemic.

Even today, it has more than 12 buyers for every 10 sellers, making it the French metropolis where real estate tension is greatest. The reasons ? A growing demography (+ 0.7% in one year) and a particularly dynamic employment pool (creation in the urban area of 21,075 jobs in ten years) driven by the installation of several large international groups and cutting-edge industry (in medical innovation in particular) as well as the immediate proximity of the German industrial fabric.

Without forgetting the presence of the European institutions and the direct connection with Paris in just 1 hour and 50 minutes by train. But not only … Its prices also have a lot to do with it (€ 3,358 / m2). Despite a 38.2% jump in prices in five years, the real estate purchasing power of Strasbourg residents remains particularly good (50 m2 for a median city income). What to continue to whet even more the appetites of the candidates for the property.