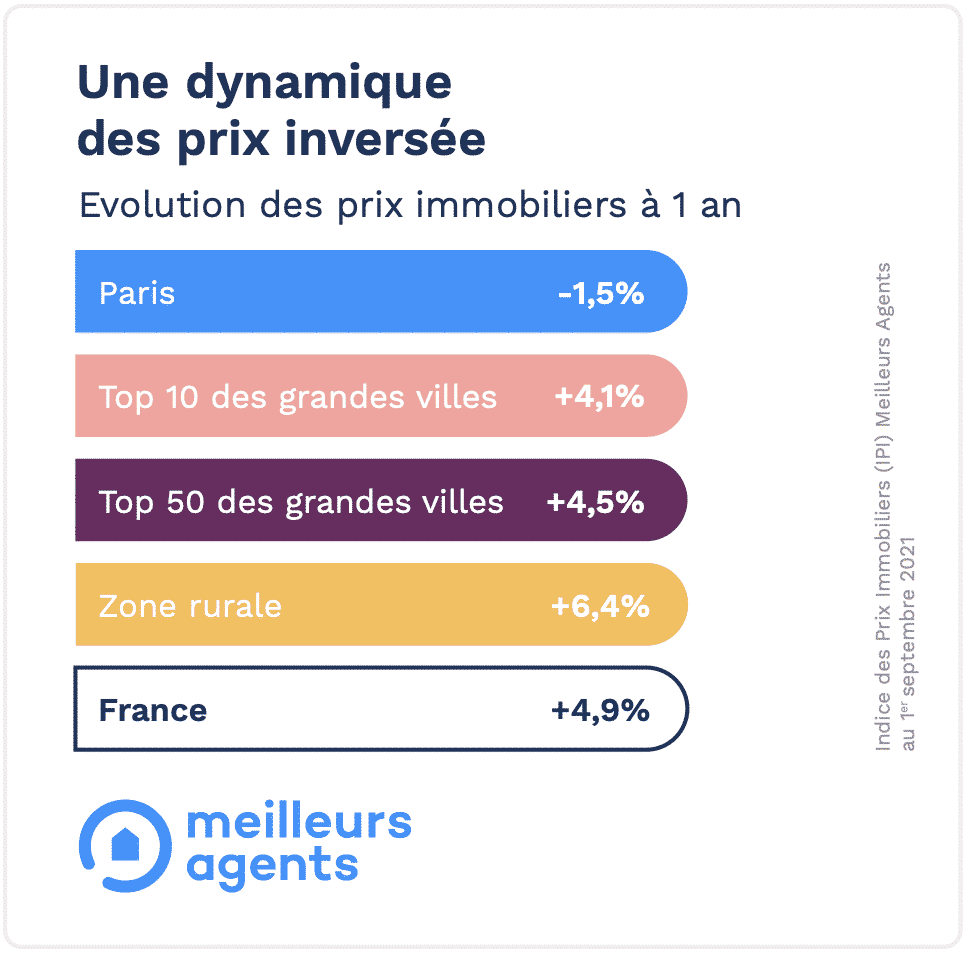 Real estate in France: The market dynamics have reversed

Even if the health crisis isn’t fully over, it no longer weighs on the real estate market. The volume of transactions carried out in 2021 should approach 1.2 million according to the projections of Meilleurs Agents. This is an historic number that would make 2021 the best year of all time in terms of sales, breaking the already exceptional record of 2019 (1.067 million).

Prices across France are also on the rise. (+ 4.9% between September 1, 2020 and September 1, 2021). One thing has changed, however: the hierarchy that has governed the market for 5 years has been totally reversed. Gone are the days when Paris and the ten largest French metropolises on their own were driving up prices. Today, it is the rural municipalities that are experiencing the strongest growth (+ 6.4% in 12 months). A situation all the more unprecedented than the capital, decline by 1.5% over the same period. The cities of Top10, meanwhile, recorded extremely similar results (9.8% increase in Strasbourg to 0.3% decrease in Toulouse).

With the health crisis, the real estate market has changed
Between confinements, the development of teleworking and the need for both space and greenery, the appetite of homeowners for homes has increased. So much so that their prices have increased almost twice as fast as those of apartments (+ 6% against + 3.4% in one year). And this, throughout France. Although widespread, this increase nevertheless reveals some disparities and raises many questions about the evolution of the market.

No urban exodus but increased attractiveness for second homes and suburban areas
Prices in rural areas have returned to their 2008 level with a more marked acceleration over the past 18 months. This renewed attractiveness is reflected in an increase in annual sales volumes (+ 13% since March 1, 2020). In addition, 33% of properties in rural areas find buyers at full price (vs. 21% before the start of the pandemic). However, this phenomenon should be put into perspective depending on the area.

Indeed, Meilleur Agents distinguishes three segments: suburban sectors, areas of second homes and more isolated municipalities. While the first two are experiencing exceptional price increases (+ 9.7% and + 9.4% respectively in one year), the most isolated municipalities remain in decline (only + 1.7%). Among the reasons that may explain this dynamic: teleworking which, even if it seems set to continue, should remain an occasional practice. Indeed, if 50% of French workers intend to telework after the crisis (vs. 38% before), the maximum amount will be one to two days per week for 60% of them. The concept of semi-main residence is boosted by the health crisis
It’s a fact, second homes are popular. While 12% of French people currently own such a property, there are now 17% considering taking the plunge. And, in this regard, it is the seaside that appeals to most buyers. Seaside resorts have seen their prices explode. While they had only grown by + 4.6% per year last, they jumped 12.3% this year.

Only slightly down, the countryside (+ 9.4%) and the mountains (+ 8.8%) also performed well. Indirectly, by promoting the development of teleworking, the crisis has boosted the second home market and accelerated the concept of semi-main residence. More than 6 in 10 teleworkers (1) say they spent more time in their second home during the crisis, and 40% (1) of regular teleworkers plan to spend almost half of the year there.

A realignment in the geography of real estate
In the largest cities, the large suburbs are becoming more attractive to the detriment of the centers. The most glaring example of this movement is in Paris. While prices inside the peripherique have fallen 1.5% since September 2020, they have jumped 8.3% in the outskirts.

Paris will remain above 10,000 € / m2
From € 10,643 / m2 in summer 2020 to € 10,451 on September 1, 2021, the last 12 months have been difficult for the capital. However, the prospect of seeing Paris fall back below the € 10,000 per m2 mark in the medium term seems unlikely. For that to happen, prices would have to experience a further decline of around 5%. Now after months uncertainties, the market is experiencing a stabilization phase: prices within central Paris have not decreased since the spring and the Real Estate Tension Index (ITI) of Meilleurs Agents has rebounded to 11% after being at its lowest in December 2020 ( 4%). As for negotiation levels, admittedly higher than before the pandemic, they have stabilized since the start of the year with 28% of transactions still taking place at full price. 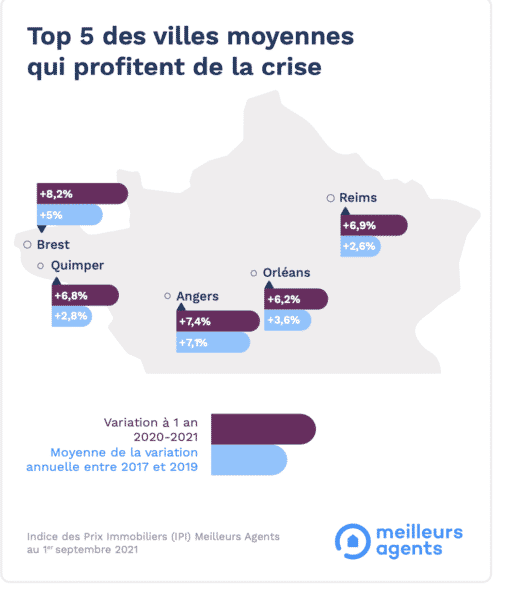 Summing up the market outlook
Nothing seems to be able to disrupt the dynamics of the real estate market in the short term. Indeed, the resilience shown by the market drivers suggests a certain continuity.

On the banking side:
The current record numbers of mortgages granted attest that banking institutions continue, despite the tightening of the loan conditions imposed by the High Council for Financial Stability (HCSF), to play their role of financier. And this, in a context of still particularly low interest rates.

Regarding employment:
Here again, the news is reassuring with an unemployment rate of 8%, far from the peak of 12% in June 2021 forecast by the Banque de France. While the lifting of the safety nets put in place by the state may raise fears of a decline in economic activity, the various projections are intended to be reassuring. Thus, their elimination should not disturb the good health of the real estate market.

On the health front:
More than 70% of French people are vaccinated. Only the emergence of a new vaccine-resistant variant could raise fears of further restrictions at the national level. Thus, the current dynamic should continue in the coming months. Prices will remain on an upward trend, in the same order of magnitude as this year, thus confirming this new real estate geography.