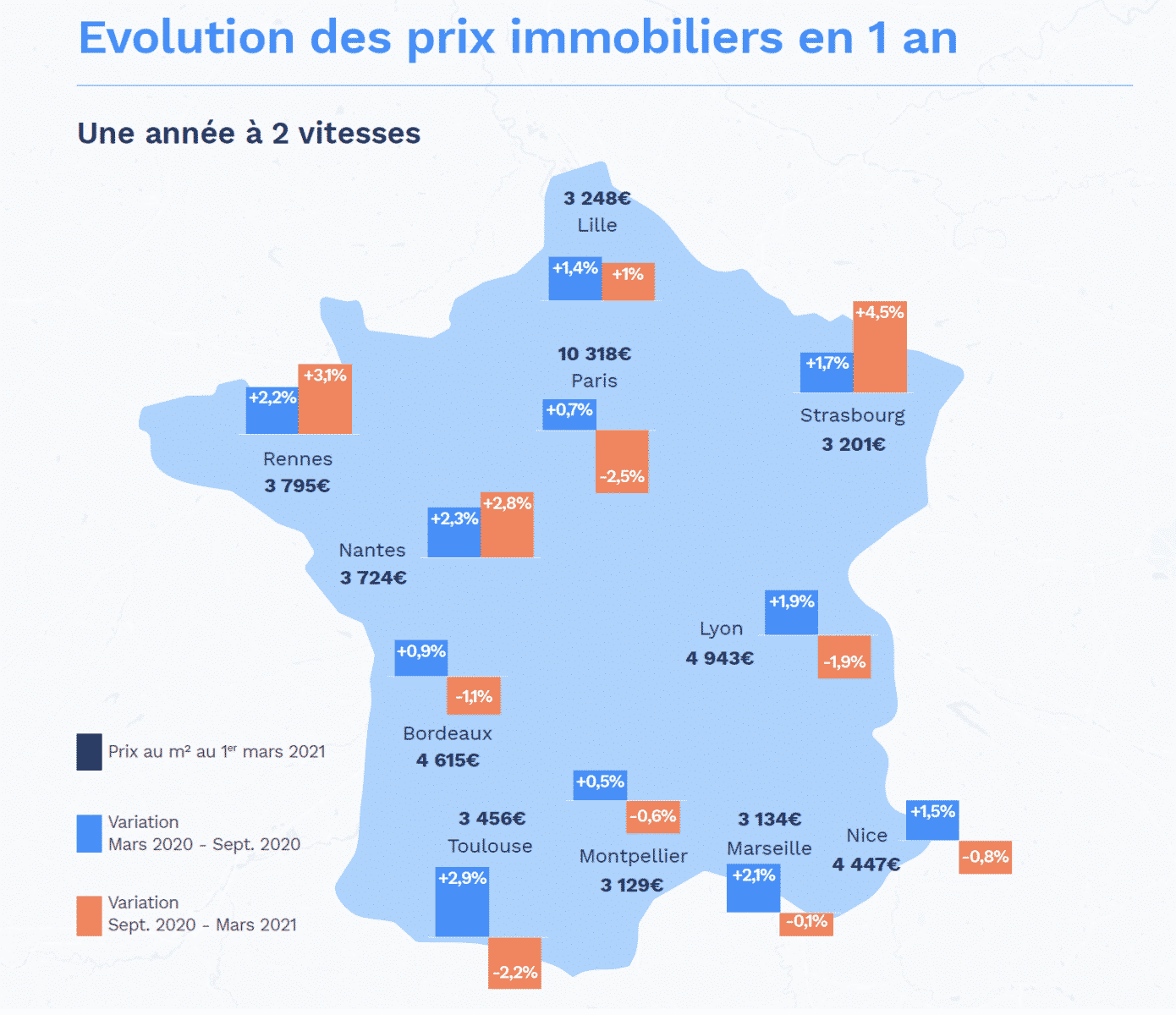 Paris Real Estate 2021: After a year of Covid

Sales Volumes have held up well

One year after the start of the health crisis, the time has come for the real estate market to take stock. And one thing is certain: while it was severely tested in its operation, it still held up very well. Particularly in terms of transaction volumes, since 2020 ended with more than one million sales. Enough to make this chaotic year one of the best growth years in real estate.

Having started at a euphoric pace in early 2020, the market was brought to a complete halt during the first lock down, resulting in the closing of branches, cancellation of visits, and an inability to sign sales contracts. For two months, the activity was at a standstill. As a result, the number of sales fell by 75%. But that was without accounting for the huge rebound that followed. Far from giving in to gloom, on the contrary, the market started again with a vengeance. From the second half of May, a particularly sudden and rapid surge in activity resulted in a + 370% increase in signed sales contracts. To the point, in mid-July, of registering an increase of + 15% more transactions compared to the annual projections of Meilleurs Agents.

The announcement of the second confinement in the fall could have signaled a new slump in the market, however the second lock down was quite different with a very moderate impact. The deployment of digital tools developed by the agencies at the end of the first wave of the epidemic (electronic signature, remote prospecting devices, virtual tours, etc.) has indeed enabled the most successful projects to materialize. In recent months, the real estate market has shown resilience and adaptation. Thus, only 10% of expected real estate transactions could not be completed.

In fact, 2020 was set to be an exceptional year, with greater momentum than 2019. “said Thomas Lefebvre, Scientific Director of Meilleur Agents.

Price side: a two-speed year

Overall, prices continued to increase at the national level since the start of the health crisis, just a year ago (+ 2%). However, Meilleur Agents has noted since the start of the school year a change in trend oriented towards price stabilization, at the start of 2020, which continued throughout France after the first confinement and the summer (+ 0.7% in Paris, + 1.9% in the ten largest cities, + 1.5% in the fifty largest cities and + 0.7% in rural areas between March 1 and September 1, 2020), but slowed since September.

Between September 1, 2020 and March 1 of this year, Paris recorded a drop in its prices of 2.5%. The same goes for the ten largest cities, which have also seen their prices stabilize (-0.1%). As for the market of the fifty largest cities in France, if prices have still been positive since the start of the school year, their growth rate has significantly decreased (0.3% since September, i.e. 1.2 points less than during the six months), but not enough to draw hasty conclusions about a hypothetical market turnaround!

This slowdown in the last half of the year affects the main cities in a heterogeneous way. Large cities with high prices such as Paris and Lyon are the most affected and observe a clear break in the dynamics of their market. Others tend to confirm the phase of stabilization of their prices anticipated for several months, like Montpellier and Marseille. Despite everything, some cities continue to progress even if the upward pressure is a notch below what the euphoria of the first months of 2020 could predict. This is the case for Strasbourg, Rennes, Nantes and Lille.

More or less marked depending on the municipalities, this slowdown in prices observed over the last six months is explained by the gradual erosion of demand over the past year. Last March, before the announcement of the first lock down, the market was indeed facing a real craze on the part of property applicants.In Paris, as in the ten largest cities in France, the Real Estate Tension Index (ITI) of Meilleurs Agents attested to ” a much higher number of buyers than sellers”.

Strasbourg or Lille, for example, had 33% and 30% more buyers than sellers, respectively. As for Rennes, Nantes, Toulouse, Paris and Montpellier, their ITI exceeded The Meilleurs Agents Barometer analysis of real estate prices | N ° 133 | March 2021 over 20%. Even Bordeaux and Marseille, where demand had weakened in recent years, had at that time experienced a resurgence of interest (10% more buyers than sellers).

The resumption of projects put on hold during the first lock down allowed the market to experience a burst of activity from May and, as a result, upward pressure on prices, the stock of buyers gradually dwindled. To the point today of witnessing a rebalancing of the balance of power between buyers and sellers. Concretely, in most large metropolises, Paris in the lead, the real estate tension is currently reaching a ratio close to one buyer for every seller. 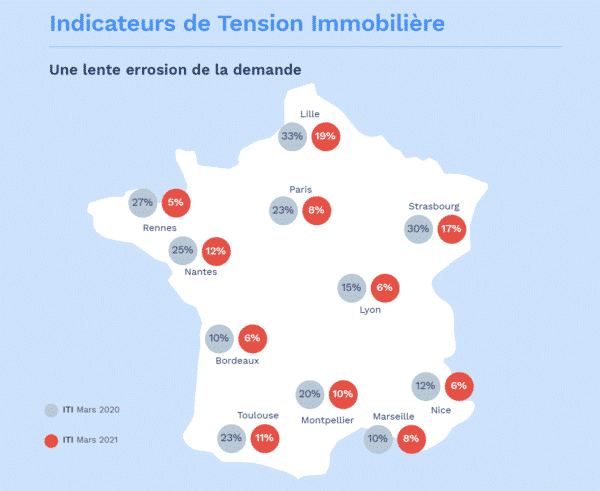 Several factors explain this weakening of demand. On the one hand, we note the mistrust of households in the face of the uncertainty of the coming months, especially once the safety nets put in place by the state have been lifted. Indeed, the end of partial income support schemes could lead to a rapid rise in unemployment. On the other hand, we must consider the weariness of the French in the face of a health crisis that seems to be protracted. ” explains Thomas Lefebvre.

As spring approaches, a traditionally extremely dynamic season for real estate, the prospect of a market that is a little more gloomy and cautious might be expected. However, activity should remain at relatively high levels, aided in this by still very low lending rates (less than 1% on average over 15 years1) and an increase in household savings in 2020 ( 200 billion euros during the year) which could increase down payments, and purchasing power. 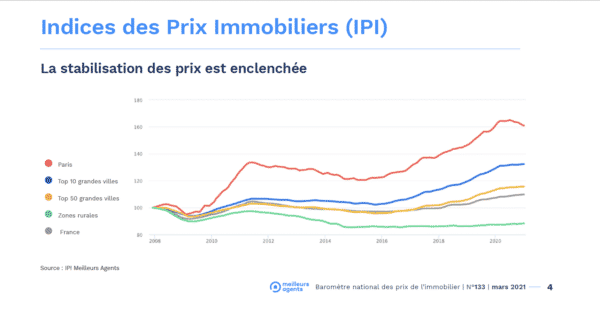