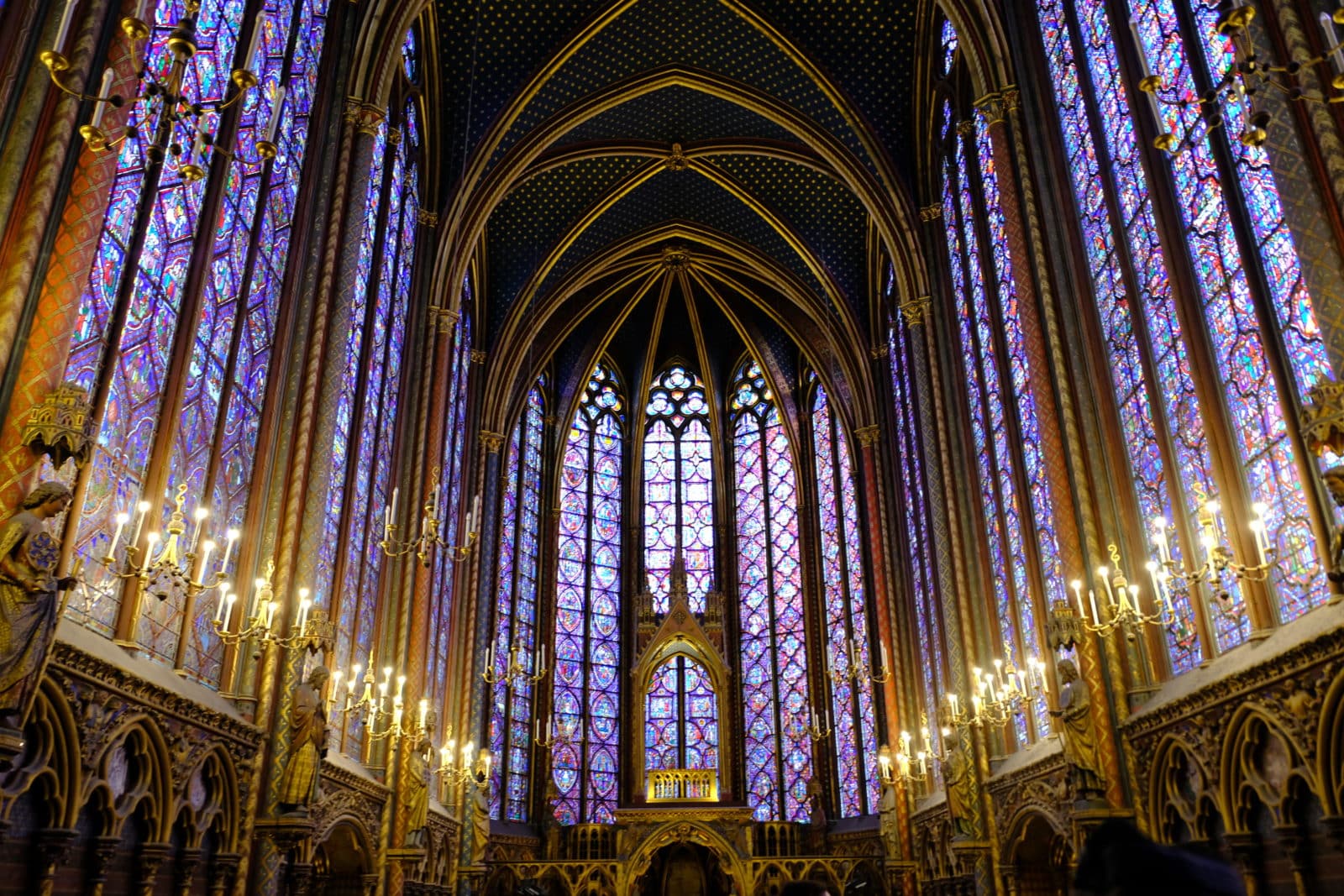 While we’re all staying home during the quarantine, we thought it would be the perfect time to read up on some of Paris’s most exceptional sites and share their unique histories with you.  And among all of Paris’s most impressive buildings, the Sainte-Chapelle takes up a more than predominant place.  Less well known than Notre-Dame but more spectacular than the Conciergerie, this giant reliquary built in the 13th century is our favorite on Île de la Cité.  Read on to learn more about this impressive French gothic chapel (and prepare yourselves for a visit as soon as the quarantine is lifted)!

It only took seven short years, from around 1241 to 1248, for the builders of Sainte-Chapelle to complete it in its entirety.  Record time when you consider that its neighbor, Notre-Dame, erected around the same period, took almost two centuries to construct. On top of it all, the Sainte-Chapelle typified a major technological feat of the time: no flying buttresses were used to strengthen the exterior walls.  Only a metal “belt,” which you won’t notice unless you’re looking for it, helps to maintain the building’s structure.

The upper chapel with its 1,113 stained glass windows

Louis IX and the Holy Relics

When St. Louis decided to edify this grand, majestic building, it was primarily to house two of Christianity’s most precious relics: Jesus’s Crown of Thorns and a fragment of the Cross of Christ, acquired at great expense from his cousin, the Emperor of Byzantium. Transferred to a new holding place during the Revolution, these relics of the passion of Christ were kept in the cathedral treasury of Notre-Dame.  They were thankfully unharmed in the fire last April, but are no longer exhibited to the public on the first Friday of each month as they once were, due to the cathedral closing.  As for the Sainte-Chapelle, these days the chapel has been completely disused for Catholic worship and is solely employed for tourism.

The upper and lower chapel

Visitors to Sainte-Chapelle first enter the lower chapel, endowed with a ceiling of magnificent moldings and ribbed vaults.  As gorgeous as the space is, the true treasure lies upstairs in the upper chapel with its 1,113 stained glass windows depicting just as many biblical scenes.  The upper chapel has always been more prestigious than the lower one: it was intended to house the Holy Relics and was reserved for the king and his family, while the lower chapel was there for the staff of the Palais de la Cité.

The ribbed, vaulted ceiling of the lower chapel.

In its 770 years of existence, Sainte Chapelle has been plagued by several fires, the most significant of which occurred in 1630 and 1777, as well as a flood.  The French Revolution spared it no harm either. All the chapel’s interior decorations were destroyed, as well as its spire, whose fleurs-de-lis undoubtedly embodied too much royalty. All that remains from the time of Saint-Louis is the building itself, which has been renovated several times, and a large portion of the stunning stained glass windows of the upper chapel.