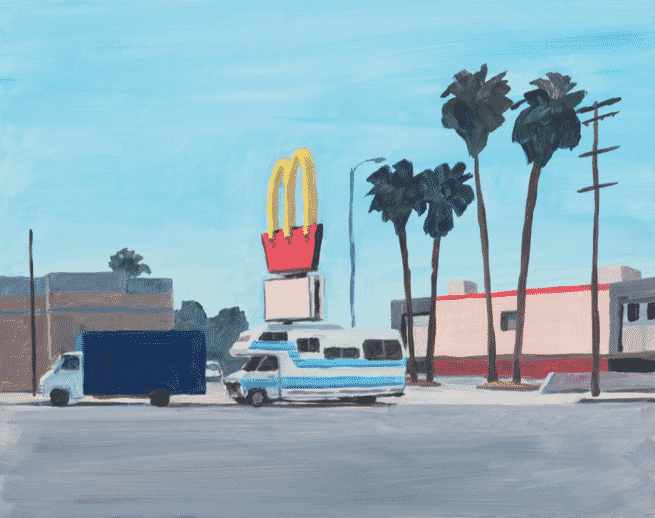 If we can’t visit museums, why not take advantage of the opportunity to (re)discover Paris art galleries that have reopened their doors?  From art to design and photography, AD magazine has narrowed down 10 temporary gallery exhibits that are worth a visit in the capital.

Five years after Marbles & Clowns, his last solo exhibit at Galerie kreo, designer Pierre Charpin presents Similitude(s), an ensemble of new pieces that give pride of place to form and color. The creative placement of coffee tables and side tables, vases and mirrors, light fixtures, and drawings evoke successions of vertical and horizontal landscapes.

For its reopening, the Galerie David Zwirner has chosen to honor Philip-Lorca diCorcia. The exhibit showcases images from a series of eleven editorial projects that the American photographer created for W magazine between 1997 and 2008 and includes several never before exhibited photographs.

Known for his illustrations, Jean-Philippe Delhomme was inspired by an extended stay in LA for this collection of about fifty small-format oil paintings based on photo snapshots.

Knowing that more than 80% of museum collections are composed of works by male artists, against less than 20% by female artists, the Galerie Italienne is switching it up, flipping the ratio with 80% women alongside 20% men. Among other artists, the works of Sylvie Auvray, Joseph Beuys, Anne Deguelle, Nina Roos, Kiki Smith, Hema Upadhyay, Joana Vasconcelos and Xavier Veilhan will be on display.

This new exhibit of Antony Gormley’s sculptures and works on paper is structured around a gigantic installation that adds complexity to the space. Consisting of continuous square aluminum tube, Run II aims to awaken our awareness of how we move around in our constructed habitat.

Les Douches la Galerie presents its second exhibit devoted to the work of the virtuoso of light, American photographer Ray K. Metzker.  Traversing several series, some fifty prints bear witness to his ever-renewed interest in experimentation. Captured between 1957 and 1982, these photographs take us through the streets of Chicago, Philadelphia, Atlantic City and a few European cities.

Famous for his monumental installations of braided thread, Japanese artist Chiharu Shiota has been questioning the notion of limits and surface for years. Galerie Templon presents two in situ installations as well as a series of new sculptures exploring the “Inner Universe”.

Pursuant to his artistic method defined in 1966, “Travail-Peinture” which consists of monochrome No. 50 paintbrush strokes repeated at regular 30 cm intervals, Swiss minimalist artist Niele Toroni presents a new series of works across different media, including photos.