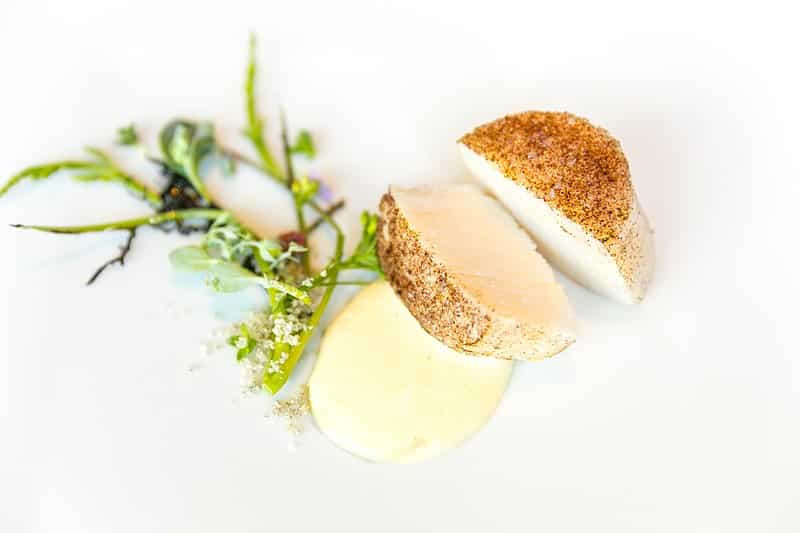 On January 21st, the celebrated Michelin Guide revealed its latest inductees at the Salle Gaveau in Paris.  New restaurants were given their first star, and among those already awarded, some inherited a second.  Read on to discover which first-star newcomers, as well second star awarded veterans, are sure to stir up Paris’ gastronomy scene in 2019. 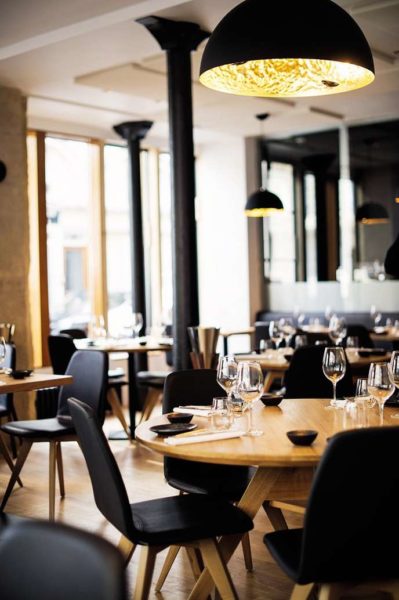 At only 21 years old, culinary newcomer Julia Sedefdjian earned a Michelin Star at Fables de La Fontaine.  Now, two years later, the Niçoise chef is back and all grown up at Baieta.  She hasn’t lost her southern roots, apparent at the first bite of her soft-crusted pissaladière, where flavorful onion basks in the culinary spotlight.  The taste experience continues in her lively reinterpretation of a traditional mussel soup, where potato cannelloni are placed on a velvety soup of green curry and tempura mussel.  Her bouillabaisse of fish delights as well, cooked to perfection atop a fennel purée with notes of rockfish.  Behind all of these carefully constructed plates, there is always an original and inventive idea, free from traditional constraints thanks to her mastered technique. 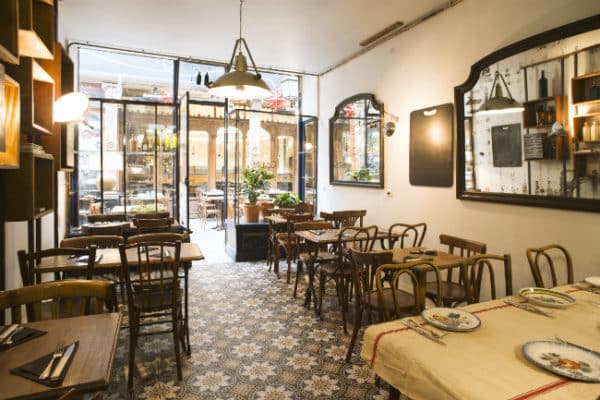 We loved him at Roseval and Tondo (12th), but we especially love Simone Tondo, colorful Sardinian chef, here at Racines, where the restaurant’s trattoria atmosphere seems to suit him perfectly.  From his open kitchen, Simone creates delectable dishes for his many guests, all seated in the small, animated dining room.  Among the starters, the vitello tonnato stands out, comprising thin slices of veal served with tuna sauce: the new Italian standard, comparable to carpaccio’s popularity in the 80’s.  Pasta fresca, straight from Bologne, or Milanaise veal chop, cooked to an impeccable pink and covered generously with bread crumbs, make for a superb main course choice.  Despite the tight seating and elevated noise level of the space, we must admit that Tondo has delivered  once again here at Racines. 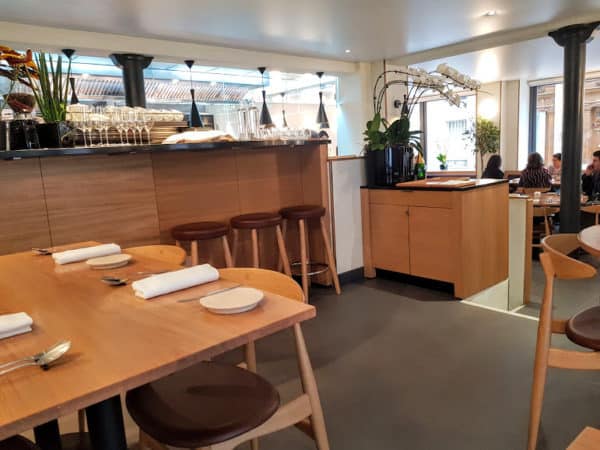 We adored Hideki Nishi at his first restaurant, Neige d’été.  Now, only a few blocks away, the Japanese chef has entrusted Pilgrim to the expert hands of Terumitsu Saito. The open kitchen is the true star of this establishment, showcasing its chefs in action throughout the entirety of the meal.  Here, diners regale in simplified interpretations of traditional cuisine: a soft-boiled egg in dark tempura coating, parsnip cream, and caramelized lotus root, all sprinkled with black truffle; beetroot, romanesco, and kale, paired with salty praline; Challandais duckling cooked in Japanese barbecue sauce, and served with its drippings, accented with a few drops of coffee.  Pilgrim is a restaurant for those with a well-trained palate, able to appreciate the subtleties of its refined fare. 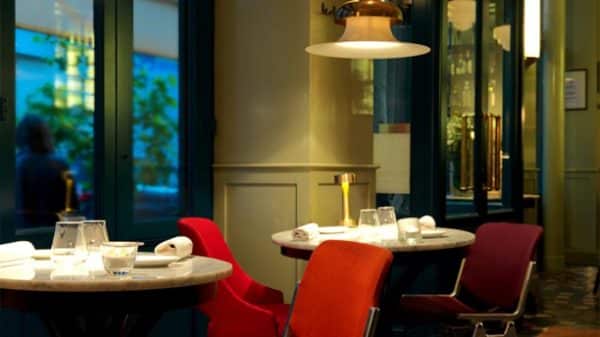 Chiho Kanzaki and Marcelo Di Giacomo first started at Mauro Colagreco, where their Japanese-Argentinean pairing created culinary sparks. Now the two have taken over the old premises of La Gazzetta, redecorated by designer Marcelo Julio with 70’s light fixtures and a bohemian decor that warms the atmosphere.  Here, diners are guided through a tasting menu that builds up in delicious flavors and leaves them surprised and intrigued: the purple and orange cauliflower paired with scallops is not only exquisite but lovely to look at; the cooked monkfish marries perfectly with a humble anchovy sauce; and the lamb, cooked rare, discreetly hides a rognon confit under a sprinkling of chives.  The flavors are delicate, the cooking is superb, and all in all, a second star might not be too far away.

Winners of a second star: 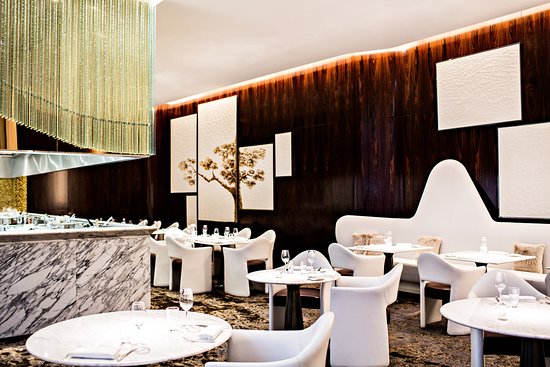 In charge since 2013, Stéphanie Le Quellec won her first star in 2014, followed by a second star in 2019.  She is known for playing with spices, contrasting flavors and textures, and for her seafood pairings.  Her style is uncomplicated: white truffles over a thin-crust bread, served with red kuri squash, chestnuts and tonka beans, is a delight, as well as the foie gras, poached in a shrimp broth, or the lobster, mixed with cardoons, parsley roots, and bone marrow.  Although it was here that we first discovered pastry chef Yann Couvreur, with his cinq-feuille made from kouign-amann dough and flavored with vanilla of your choosing, it is now Nicolas Paciello who regales us at dessert time.  A lovely choice for a special occasion. 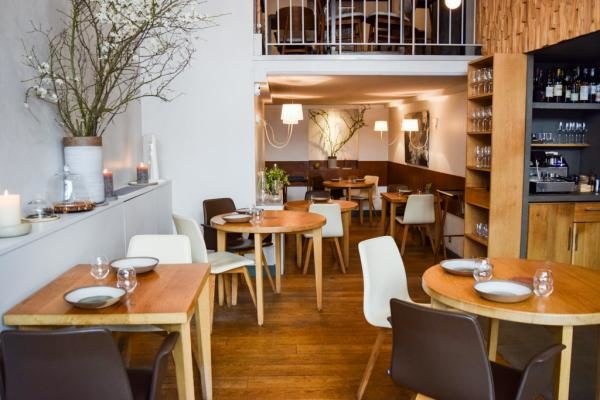 Talented 32 year old chef David Toutain, who rose to fame at Agape Substance, continues to surprise guests with his original products, pairings, and recipes in this highly refined establishment.  Over the course of five or ten surprise plates, excluding amuse-bouches and small after dinner treats, adventurous diners enjoy the colorful, creative, and flavorful dishes of this veritable culinary laboratory, of which David is the so-called director of research.  Some of the unique menu items include spinach financiers with fourme d’Ambert cheese; oysters paired with yuzu and kiwi; eel, black sesame, and granny smith apples; and white chocolate with cauliflower and coconut milk.  A truly unique culinary experience that inspires the palate and leaves diners satisfied.

Among those that maintained their star status, check out these one star, two star, and three star favorites: