According to Laurent Dumas, president of The Emerige Group and owner and coordinating officer of the site, the realization of the project proved more long-term that anticipated: “we had never carried out such a complex operation, so full of history, details and attention.”

After the initial acquisition of a site belonging to the Diocese of Paris at 14 boulevard Raspail in 2011, Emerige scooped up neighboring plots and buildings in the same block: a large Renault garage, an engineering school, and former industrial buildings.  It is the courtyards of these spaces, once-serving as a parking garage, that now forms Beaupassage. Construction, however, didn’t begin until 2014, after a group of residents contested the building permit obtained in 2013, delaying groundbreaking by a year.  After three years of construction, the project is finally coming to an end, with opening day set for August 25th.

Les Architectes des Bâtiments de France (ABF), La Commission du Vieux Paris (CVP), The City Hall of Paris, and the Town Hall of the 7th Arrondissement have all worked closely together throughout the remodeling and construction process.  Frédéric Bourstin, head of the B & B agency, explains: “our priority has been to preserve the existing buildings as much as possible, from the old 17th century convent to the buildings of the 1960’s and1930’s.”

Above the 14 commercial spaces on the ground level, 59 apartments, 10 of which will serve as government-subsidized housing, were created.  Studios or five-room apartments measuring 200 m² have been sold to residents at more than €20,000/m².  The underground space of the buildings was remodeled to serve as a receiving center, thus eliminating the need for motorized vehicles to enter for deliveries, rendering Beaupassage 100% pedestrian-friendly and sheltered from the tumult of the city. 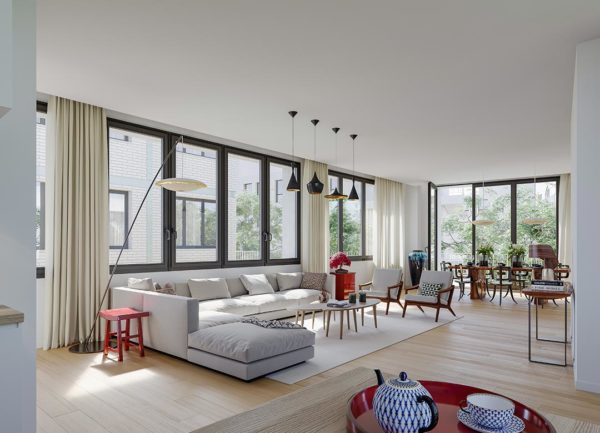 Franklin Azzi, another architectural collaborator, describes the project as “very unusual,” noting that the biggest undertaking was the creation of three entrance pathways, stemming from the three surrounding streets — rue du Bac, rue de Grenelle, and boulevard Raspail — that lead to the main heart of the yard. 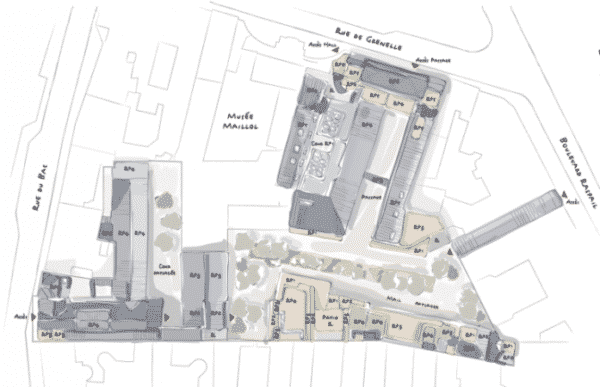 Passionate about contemporary art, Laurent Dumas has also planned four complimentary art pieces, three of which were specially commissioned for Beaupassage. Fabrice Hyber has created “Les Deux Chênes”, a casting of three different one hundred year old trees. Eva Jospin, has designed the monumental “Traversée”, a magnificent sawn and cutter-cut cardboard forest, 28 meters long and 5.30 meters high. Marc Vellay, has sculpted “L’arbre neuronal”, a bronze tree measuring 4 meters, resembling a network of neurons.  As for the German, Stefan Rinck, his contribution entitled  “Les Mongoustes de Beauvais” is a 6-ton stone statue representing three giant mammals tied up by a rope.  To add a bit of greenery to the space, landscape architect Michel Desvigne has planted 25 trees in open ground and about sixty species of plants that bloom year-round.

Reuniting the best chefs and artisans in the world

In spite of these aesthetic exteriors, the main factor of attractiveness of Beaupassage will no doubt be its prestigious lineup of specialty shops and Michelin-starred restaurants, all offering cuisine to eat on the spot or take away.

According to Laurent Dumas, “The idea to incorporate quality gastronomical institutions, at reasonable prices, came naturally.  Inspired by what exists elsewhere, we went out in search of the best chefs and artisans in the world.  It took a lot of outreach and persuasion to bring them together, but the result has exceeded our expectations.”

Chef Yannick Alléno (two-time winner of three Michelin stars) will propose Allénothèque, a restaurant with an extensive wine cellar (700 varieties) where superior wine-food pairings will be the main priority. The Finistère Olivier Bellin will open “Mersea”, which will house a gin-bar and a specialty area dedicated to seafood. In his butcher shop turned restaurant (also serving as a cigar cellar), the Lorrain Alexandre Polmard will serve his famous “hibernated” beef and a selection of charcuterie. Anne-Sophie Pic, also multi-starred, will bring her concept “Daily Pic” to the space: an upscale selection of fresh to-go options, made in Valencia and served in glass jars.  Also on the menu: a cheese shop (Barthélemy) and a Carrefour City.

The foodie pressed for time will still be able to stop at Thierry Marx, who will inaugurate his second Parisian bakery and sandwich shop in the space, or enjoy a pastry, macaron, or some chocolates at Café Pierre Hermé.  Post-meal, feel free to sit at the terrace of %Arabica, a Japanese brand created by roaster Junichi Yamaguchi. Finally, to work off those calories, former Thai boxing world champion, Abdoulaye Fadiga, will open his sports club, with sauna, climbing wall, and weight training area.  Beaupassage has truly planned it all.