Which arrondissements boast the most expensive property values in Paris?  Which ones have seen prices rise over the past five years?  How does your arrondissement figure in the grand scheme?  Using notary data, Le Figaro Immobilier has compiled a comprehensive summary of real estate price changes, arrondissement by arrondissement.

Over the past five months in Paris alone, property values have increased by nearly 7% (€9.510/m² on average), while in the rest of France, prices have grown by just over 1% (€2.545/m² on average).  According to Fabrice Abraham, director general of Guy Hoquet Immobilier, “before the end of the year, the average price across all of Paris will have surpassed €10/m²”.

Guy Hoquet also reports that those buying property in Paris pay an average of €473,598, which is more than double the average budget of property-seekers elsewhere in the country (€220,000). With this sum, on average, buyers acquire a modest apartment of 49.8 m² (against an 86.8 m² national average).

Market time in the capital has fallen by 3 days to 61 days (compared with the national average of 89 days, which has gone up 2 days). However, Abraham notes that ”when an apartment is priced correctly and it corresponds to the demand, it sells in less than 7 days in Paris.”

These numbers confirm the extent in which the real-estate market in France is two-sided, with Paris forever-remaining an exception to nation-wide sales trends.  Le Figaro’s data goes further, providing detail regarding evolution of real estate prices by arrondissement.

Increased number of arrondissements at more than €10.000/m²

In 2014, only four arrondissements in Paris boasted property values at more than €10.000/m²: the 4th, the 6th, the 7th and the 8th.  This was about the same in 2016, with the 1st arrondissement replacing the 8th.  Just two years later, however, three other districts have joined this ever-widening circle: the 2nd, the 3rd and the 5th, where prices have been climbing steadily for 2-3 years. 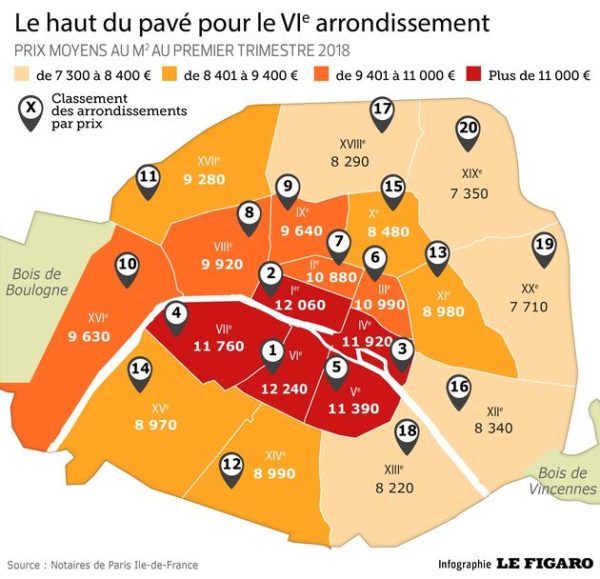 Soaring prices in all Paris districts, even the least well-known

Over the past five years, only the 8th arrondissement has seen its prices fall (by 2%). The other 19 have experienced price increases: 12 have had double-digit growth, and 4 have shown annual increases of over 3%.

Percent Change in Price Over 5 Years: 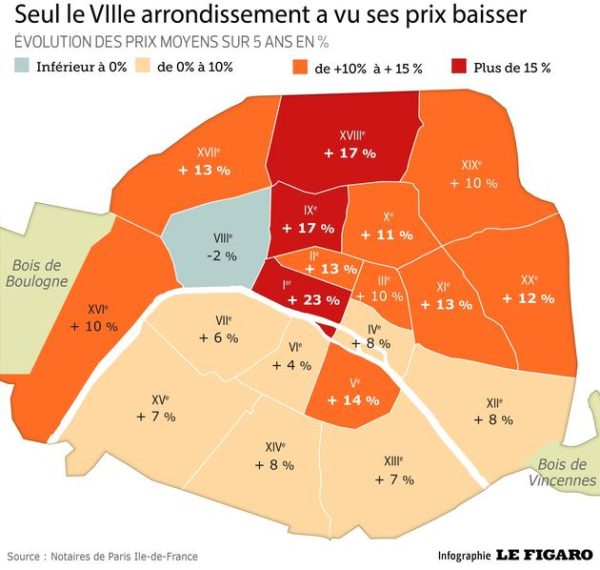 Overall price differences in relation to the most expensive district (the 6th) have significantly reduced. This is especially true for the 1st and the 18th, the difference of which has decreased by 19% in five years.  The only neighborhood to see an increase is the 8th, where the price gap has augmented by 5%.

Paris Property Group’s Kathryn Brown sees a correlation between the Mairie’s crackdown on short term rentals in recent years with the leveling of prices across Paris during the same period.  “Without the lure of short term rental income, pied-a-terre and investment buyers are no longer tied to the central-most arrondissements and can take advantage of the lower prices and more charming, lively and authentic neighborhoods slightly farther afield.  Paris is made up of ‘villages’ and there are many wonderful corners of Paris to choose from, as buyers are discovering.”

Price Differences in Relation to Most Expensive Arrondissement (the 6th) in 2014 and 2018:

1st arrondissement rises in the ranks, 8th falls out of top five

Overall Ranking of the Most Expensive Arrondissements in 2014 & 2018: