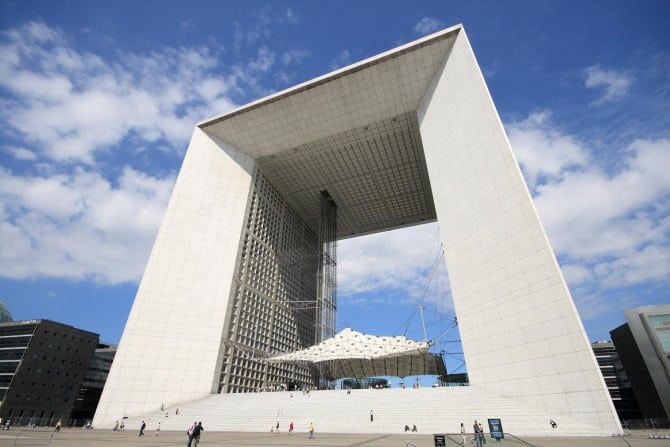 Located west of the capital, La Défense is Paris’ main business hub, best known for its iconic arch-shaped building (pictured above), the Grande Arche. A number of projects are underway to modernize, refurbish and green the area.

Unlike surrounding communes such as Puteaux, Nanterre and Neuilly-sur-Seine, La Défense doesn’t comprise many residential apartments. It does however house a great many French and international companies, and is an important work destination for many Parisians. The area is also home to the 4 Temps shopping mall, the busiest shopping center in Europe.

Here’s a look at some of the exciting changes to come:

Two innovative urban landscaping projects will extend from the Grande Arche to the river Seine.

Scheduled for completion in 2017,  the Gardens of the Arch will stretch over 20 acres and contain La Défense’ first new housing units in 30 years, as well as a hotel, business school and close to 40,000 m2 of office and commercial space. It will include a grand leisure center with the largest indoor concert hall in Europe.

Further down, stretching along La Défense’ main artery between the Arche and the Seine in Nanterre, Les Terrasses will be a collection of 20 landscaped terraces. Each terrace will be uniquely designed and contain different leisure spaces, such as children’s play areas, kiosks and pavilions.

Estimated to cost 200 million euros, the Alto Tower is an inverted cone-shaped tower — its top floor is twice as large as its ground floor — that will rise up in the place of an existing office building. Adorned with glass scales, the striking structure will measure 150 meters and contain over 50,000 m2 of office space.

“Oxygen,” a garden terrace below the Arch

The Grande Arche itself will soon welcome a brand new garden terrace at its foot, containing “trendy” new eateries. From Spring 2017, the currently bare esplanade that stretches out in front of La Défense’s Arch in the direction of central Paris will be revamped to accommodate a 1,000 m2 garden, a hip new bar, four organic restaurants and a coworking space.

Named “Oxygen,” this project will be carried out by architect Stéphane Malka, will cost close to 5 million euros and should be ready by 2017.

Once the drab and dreary business area Paris exiled all its high-rise buildings to, La Défense’s ongoing refurbishment is set to transform it from a soulless commercial district to a bustling, vibrant and green quartier in its own right, within even faster commute to central Paris thanks to the new and improved transport links of the Grand Paris Express, Greater Paris’ expanded underground network.