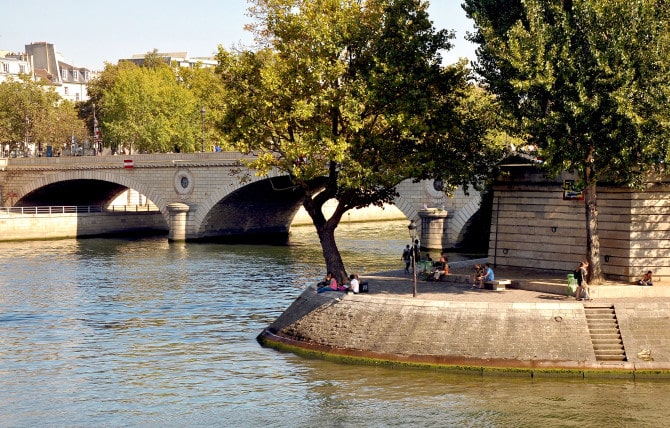 The city of Paris is inviting residents and architects to submit proposals for green car-free pedestrian zones on sections of the right bank. In 2014, Paris opened Les Berges de Seine on the left bank, near the Musee d’Orsay. The pedestrian zone is host to a range of activities, from bars and restaurants to rock climbing and urban garden installations, sports classes or as just a comfortable spot to relax. The project has met with wide success, accommodating 4 million visitors in only 18 months. Thanks to the left bank’s restriction of cars, there has been a 15% decrease in nitrogen dioxide in the area. Now, the city is considering two new pedestrian and recreational areas, this time along the right bank of the Seine.

The first is a proposed 3.3km tunnel along the Tuileries in the 1st arrondissement, toward Arsenal in the 4th. The second suggests a shorter zone of 1.5km of sidewalk, from place du Châtelet to Pont de Sully. Traffic considerations are paramount for either scenario. The number of vehicles that pass by every hour along the right bank closely mirrors the number that existed at the Berges de Seine before it was closed off to cars: approximately 2,700 vehicles enter the tunnel of the Tuileries each hour. City officials are confident the impact will be minimal. Community participation is being actively solicited throughout the process, from the design submissions to public forums encouraging neighborhood residents to share their opinions. Public forums have been held in the town halls of several arrondisements in the past few weeks, attended by local government officials. These public meetings will continue throughout the month of July in the 1st, 4th, 7th and 12th arrondisements. A city-wide public meeting is scheduled for this September. The city plans to move forward with the project this fall. Residents of Paris can expect to enjoy this new urban recreational space by summer 2016. Photo by Wikipedia By Jennie Cottle