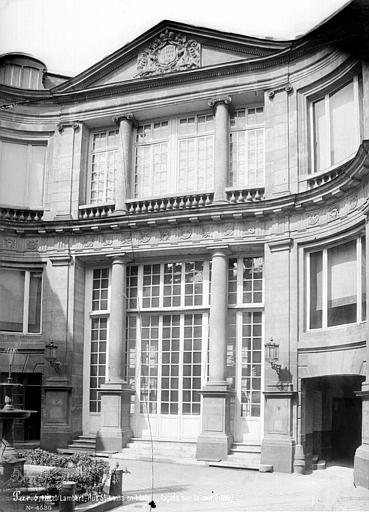 The 17th century Hôtel Lambert is one of Paris’ grandest privately-owned mansions, located in the heart of Paris on the Île Saint-Louis in the 4th arrondissement (district). The building was formerly a splendid example of mid-17th century architecture and interior design, containing some fine frescoes.

We reported in September 2012 on the controversy surrounding restoration work to the mansion. By the late 20th century, the exterior was still palatial and stately but the interior was in poor repair. Parts of the timber structure were rotting, wall paintings were cracked and discolored and a staircase was sagging.

In 2007, a brother of the Emir of Qatar bought the Hôtel Lambert for an estimated €80 million. He planned a complete makeover, including installing elevators, air conditioning, various security features and an underground car park. Conservationists fiercely opposed the scheme, afraid that it would ruin the building’s original character.

After several years of wrangling, the renovation was finally given the go-ahead under the supervision of Bâtiments de France, which safeguards historic monuments. The work was scheduled for completion in February 2014.

Then fate struck in the form of a fire in July 2013, which seriously damaged a large section of the roof and a central staircase. The blaze completely destroyed the Cabinet des Bains, a small room that once served as a combined bedroom and bathroom. It had a series of fine ceiling frescoes by Eustache le Sueur. Charles Le Brun’s series of frescoes in the Gallery of Hercules was also badly damaged.

Happily, the restoration work has now resumed but is not expected to be completed before the end of 2016 at the earliest. It will be good to see this landmark building restored to its former glory.