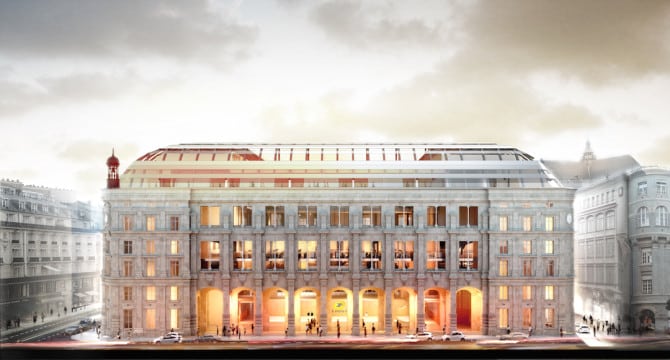 Renovation of the Louvre post office building full speed ahead

An ambitious project to renovate the Louvre post office building includes big plans both inside and out.

A rarity in Paris, the Louvre post office is well known for its 7-days-a-week and near 24-hours-a-day service. Besides being the only post office with that claim, it is also the most frequented one in the city. But those in the habit of sending packages at all hours of the night will have to (temporarily) seek other arrangements, as the building undergoes extensive changes both inside and out.

The ambitious renovations will bring not only a new look but new life to the building, offering a myriad of services from a luxury boutique hotel to social housing to a workspace for young entrepreneurs.

Construction for the project has already begun and is estimated to continue for the next two and a half years. During this time, La Poste has set up a temporary post office with extended hours nearby on the rue Etienne Marcel – although not quite matching the 24/7 feat of the Louvre office.

The lead architect on the project, Dominique Perrault, was selected by the French postal services Groupe La Poste and Poste Immo. Mr. Perrault has a long record of contributing to the Parisian landscape, most notably with his design of the Francois-Mitterand Library in the 14th arrondissement, which opened in 1996. With an investment of 140 million euros, the completed project aims to increase the building’s value and generate greater revenue through a more active use of its 35,000 square meters.

The new activities in the building will be integrated throughout, starting on the top floor with a boutique 4- star hotel with 80 rooms. Another floor of the building will transform into 10,000 square meters of office space. Next door, entrepreneur Laurent Taïb, founder of the restaurant Kong, opens a new restaurant with an impressive outdoor terrace. At street level, the post office will maintain its historic role, but will grow to include a police station, a co-working space, a daycare center and a social housing program.

Original plans set construction to start in 2012, but have faced delays until last month. Groups like the Paris Historical Society protested the project, fearing that the integrity of the building’s structure could be compromised and attempted to have the building classified as a historic landmark. Despite this opposition, the Parisian municipal government ultimately approved the plans, determining that the space could be best used by maximizing the services it can host and offer to the city.

Those in need of midnight mailings can plan to return to the revamped building sometime in early 2018.