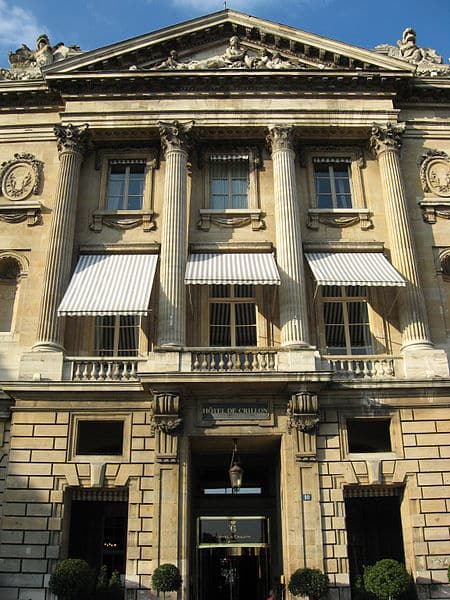 One of the grandes dames of Paris hotels, the Hotel de Crillon, is undergoing its first major renovation since becoming a hotel in 1909. Work began in 2013 and is scheduled for completion in 2015.

Like the Ritz, the 146-room hotel missed out on the “palace” status granted to a handful of luxury hotels in 2011. They included the Park Hyatt Paris-Vendôme, Le Bristol, the Plaza Athénée, Le Meurice and, later, the George V. A number of newer hotels have also received the distinction. It is hoped that the present makeover of the Crillon, preserving the original 18th century spirit of the décor, will enable it to gain the palace accolade.

This majestic building started life in 1758. It was one of two identical palaces commissioned as government offices by King Louis XV on what later became the Place de la Concorde in the 1st arrondissement (district). The eastern building is still the headquarters of the French Navy.

Having become a private residence, the northern palace (now the Crillon) was acquired by the Count of Crillon in 1788. It was bad timing. The revolutionary government confiscated the building in 1791, and King Louis XVI was guillotined in front of it two years later.

The Count’s family later got back the building and held it until 1909, when it was transformed into a palatial hotel. Much of the original 18th century décor was removed when the hotel first opened, but the exterior was retained. The Crillon was sold to a member of the Saudi Royal Family in 2010.

The building has been host to important historical events. In 1778 the newly founded United States of America signed treaties there with France recognizing the US Declaration of Independence, and concluding a trade agreement. U.S. President Woodrow Wilson chaired the meetings at the Crillon that led to the founding of the League of Nations in 1919.

Bouygues Bâtiment Ile-de-France, a subsidiary of Bouygues Construction, won the contract for the restoration work, worth more than €100 million. This involves the complete renovation of the 14,000m2 building and its décor, the extension of the bedrooms, and the creation of a basement spa and pool.

Henry Simpson of Bouygues Rénovation Privée told us that the Crillon’s ambitious renovation program would enable it to compete with the best hotels in the world. The Lebanese architect Aline Asmar d’Amman is the artistic director of the project. Some signature pieces will remain in place, notably a Baccarat crystal drinks cabinet and two fountains originally from the Chateau of Versailles.