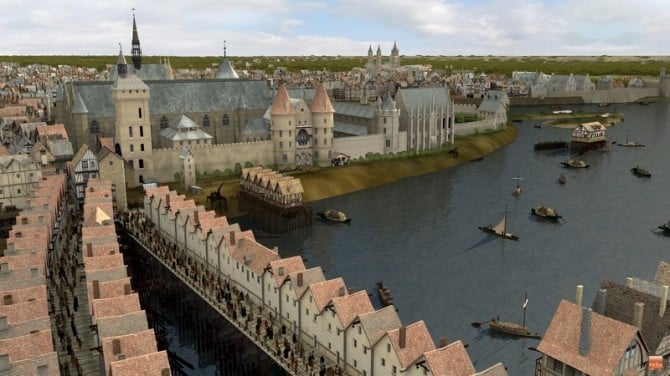 Have you ever wondered how Paris might have looked in the 1500s? Now you can take a virtual walk through Paris with a series of 3D maps developed by Grez Productions and based on a range of historical sources.

Chances are you might recognize some of the landmarks in 1550. The cathedral of Notre-Dame had been standing for 200 years, although it was painted in multi-colored tones then. The church of Saint-Germain-des-Près had long been there but much of the abbey itself has disappeared today. And some of the medieval buildings remain in neighborhoods such as the Marais.

16th-century Paris was cramped, noisy and insalubrious but it was as much the bustling core of the nation as it is now. To see the spacious boulevards, stylish mansions and elegant squares, you’d have to wait for Baron Haussmann’s monumental urban renewal program in the late 19th century.

The first image shows Paris from the Pont Saint-Michel, which has been rebuilt several times. In the foreground is the île de la Cité, probably the site of the earliest settlement. The Palais de la Cité was the royal residence in medieval times. Stone was already used extensively in building but colombage (half-timbered) construction was common. The towers of the Palais du Louvre are in the background. It was built as a fortress in the late 12th century and became the royal palace in the 14th.

Another image is from the Right Bank overlooking the île de la Cité, the Palais de la Cité and the Left Bank. It shows the Pont au Change (last rebuilt in 1860) and the Pont aux Meuniers (now gone) with serried ranks of buildings along their length. Owing to the high traffic volumes on bridges, they were ideal places for shops and houses. That was a popular idea in Europe at the time. Other examples include the original London Bridge and the Ponte Vecchio in Florence, which is still host to jewelers and art dealers.

The modern shot of the same view shows the bridge buildings are long gone, the Pont aux Meuniers has disappeared and the Palais de Justice now occupies the site of the Palais de la Cité.

France’s largest post office begins a new chapter
The legendary Poste du Louvre (Louvre Post Office), in the heart of Paris, is getting a makeover: the site will soon be home to a surprising mix of offices, apartments, boutiques, and a luxury hotel.  The building itself will remain in the hands of La Poste and will retain some of its postal activity, although […]
Search
Find us on
Facebook
Get the PPG Monthly newsletter