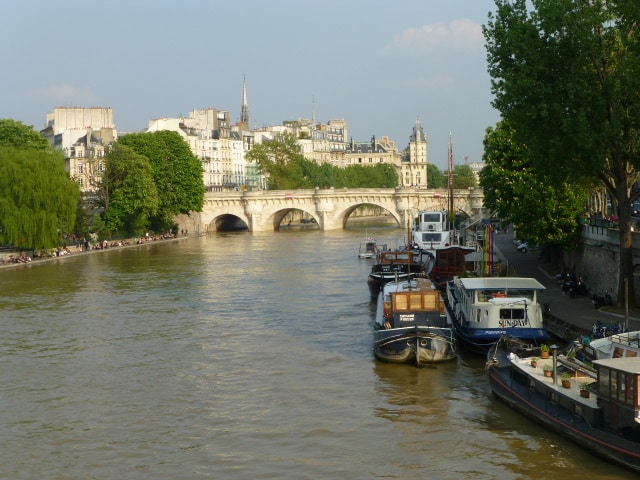 Living on a houseboat in Paris

Apartments with a river view in top Paris locations command premium prices. One was sold recently on the Quai de Conti in the 6th arrondissement (district) for a record €42,600/m2. So why not live on the River Seine instead?

Opportunities to live on a former barge or a river boat don’t come up very often. But when they do, they offer the chance to live close to the city center for less than the cost of a traditional apartment. You often get more spacious accommodations and a patio (the deck) for watching river and city life go by.

The River Seine was once an important commercial waterway, plied by cargo-carrying barges (péniches). As the river gave way to the railroads and then to the highways, barges declined in importance. Today, they’re more often to be found housing restaurants or offering river cruises.

However, some river craft have been transformed into houseboats, from small 30m2 vedettes (motor launches) to large, well-appointed former barges of 200m2+ in sought-after locations. Prices range from €150,000 up to €1.5 million and barges can cost up to 40% less than a traditional apartment.

As always, it pays to be well informed before taking the plunge (!) If the boat does not already have a mooring on one of the quais, you have to apply for one from the body that allocates places. Houseboats are anchored at quais all over Paris, but there’s a long waiting list for an available berth.

Also, you need to take into account the rental of the mooring (up to €1,000 per month in Paris), additional insurance premiums and relatively high maintenance costs.

River living is a rather different prospect from inhabiting dry land, but people who have tried it say it’s a way of life that is very special.

The most colorful streets in Paris
Parisian architecture is gorgeous with its Haussmannian buildings, but its streets tend to be rather neutral compared to other large European cities.  Paris being Paris, however, the capital of course boasts some colorful hidden gems, discoverable thanks to vivreparis.fr, who’s put together a list of the city’s most colorful streets.  Now’s the perfect time to […]
Search
Find us on
Facebook
Get the PPG Monthly newsletter