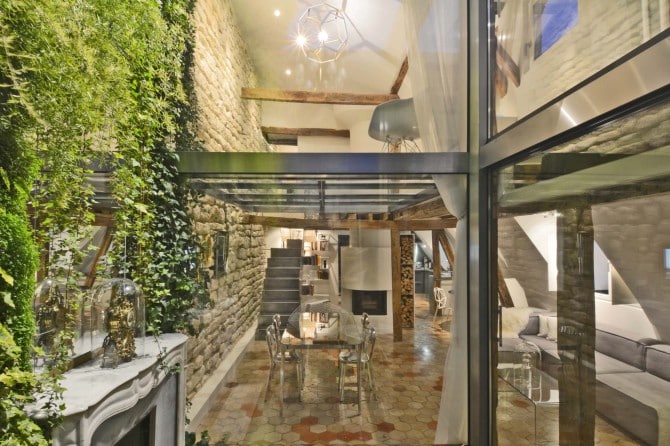 An American architect in Paris: an interview with Michael Herrman

An interview with our collaborator Michael Herrman, a prize-winning architect who has created residential projects in Paris.  He also works on projects around Europe and in the US.

1. Where do you come from and what brought you here?

I spent most of my childhood in the US, mainly in Miami. I received degrees in architecture from Cornell and Princeton universities. Then I spent a decade working in architects’ studios throughout the world. Eventually, I joined the studio of French architect Jean Nouvel in Paris. This gave me the rare opportunity to work on one of the largest museum projects of the past 20 years, the Musée du Quai Branly. I collaborated on the design of its rooftop restaurant, Les Ombres, with its sculptural canopy and view of the Eiffel Tower.

After four years with Jean Nouvel, in 2003 I was awarded the Rome Prize in architecture. I stayed in Rome for several years, which enabled me to start working independently. Then I returned to Paris, where I founded my practice. It focuses on various types of projects, including residential projects in Rome and Paris, as well as other cities in Europe.

2. What is your profession and how did you get into that line of work?

Architecture has always been a central part of my life. As is often the case with architects, I have had both a fascination with and an aptitude for buildings and design since early childhood. I began formally studying architecture and the fine arts when I was 10 years old.

3. Had you done/do you do the same kind of work in a different part of the world? If yes where?

At the beginning of my career, I worked in architects’ studios in New York, Tokyo, London and Madrid (through a Fulbright Grant). And, of course, I worked in Rome after being awarded the architecture prize.

I am currently working on projects in other countries in Europe as well as in the US, primarily in Rome, Geneva, and New York.

4. What are the three biggest challenges Paris had in store for you, both in terms of working here and living here?

Having to negotiate complex planning and preservation laws in Paris for my clients has been both a challenge and an inspiration. This has enabled me to develop a respect for and sensitivity to history and to find new ways to combine this with contemporary design and new building techniques and technologies.

The difference between the US and France in terms of the types of materials and construction techniques was a challenge at first. But it became an advantage as I learned how to use the incredible skill of French manufacturing to create custom-designed and produced components of projects – from complex steel and glass structural pieces to elegant well-crafted furniture. Unlike what I experienced in the US, there’s a natural tendency in France for customization rather than mass-produced standardization.

I also had to adjust to the annual vacations and holidays in France, when the construction and manufacturing industries shut down. This requires extra organization to ensure that materials and labor are available when you need them and that deadlines are not compromised. I’ve also come to appreciate the benefits of these breaks, when you can truly take time off.

5. In terms of your profession, how has Paris real estate changed over the past 10 years?

Over the past 10 years, I’ve found that the types of properties on the market have become more diverse. New insulation materials and silent air-conditioning systems are available. And city planners are open to improving the interiors of buildings. This means that ground floor areas, the upper floors of maids’ rooms, and other spaces not traditionally considered ideal residences have become increasingly accessible. They often offer more scope for creating beautiful, unique spaces than the more traditional mid-level apartments.

6. What is your favorite neighborhood in Paris?

You also find the beautiful exposed oak beams and limestone walls of the Marais and St. Germain in the Madeleine. But they are usually of higher quality, with larger beams and more solidly-created structures. Many were built with the improved construction techniques of the period, just before iron structures ended the use of wood forever in the mid-19th century.

7. What is another Parisian neighborhood that you like and why?

The Marais neighborhood in the 4th arrondissement. It’s the oldest and best-preserved part of Paris, with its scenic winding streets, and is full of architectural treasures. The Marais was considered so unique, historic and beautiful in the mid-20th century that it was the first urban area of any European city where the façade of every building was completely preserved. This inspired new planning and preservation laws throughout Europe.

Today, the Marais boasts more noble mansions and exquisite hidden palaces with beautiful gardens than anywhere else in the country. It has also become a center of art, design, fashion, and cuisine, attracting both local and international creators. So the streets of the Marais are full of Parisians and visitors enjoying its combination of historic architecture, shopping and dining in charming medieval streets.

The harmonious combination of history and modernity in Paris is truly unique. Other cities, notably many Italian cities, are also steeped in history and have incredible contemporary art and design scenes. But the old and the new tend to remain very separate. In contrast, Paris has learned to integrate the two. It negotiates the fine line between its rich history and cutting-edge design in fascinating ways. Many other European cities struggle with this awkwardly and often unsuccessfully.

9. Is there one hidden treasure (specific fabric store, a certain booth on the flea market, etc.) that you find indispensable to your work here? Please share.

The Marché Serpette at the Clignancourt Marché aux Puces [one of the world’s largest flea markets] in the 18th arrondissement for the eclectic variety of objects and furniture from the 19th and early 20th centuries.

10. If you could offer one piece of advice to a first-time buyer in Paris, what would it be?

Choose the three or four ideal qualities you want in an apartment and be flexible about the rest. This enables your search to be more focused and realistic.

Paris renovation and decoration stories from the front lines: an apartment in the Marais neighborhood