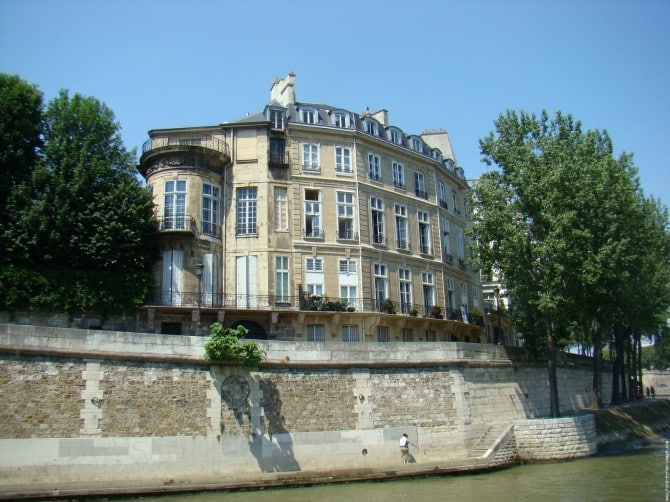 This private mansion has fallen under controversy in the last five years as its new owner, a brother of the Emir of Qatar, has embarked upon restoring it.  Located on the tip of Île Saint-Louis, in the 4th arrondissement, the Hotel Lambert, designed by architect Louis Le Vau was originally built between 1640 and 1644 for the financier Jean-Baptiste Lambert

and continued by his younger brother Nicolas Lambert, later president of the Chambre des Comptes.  Nicolas Lambert, commissioned the interiors to be decorated by Charles Le Brun, François Perrier, and Eustache Le Sueur, producing one of the finest, most-innovative, and iconographically coherent examples of mid-17th-century domestic architecture and decorative painting in France. During the 20th century, the Hotel Lambert was divided into several luxury apartments, occupied by some of France’s most famous stars and politicians.  From 1975-2007, the Rothschild family owned the mansion, and hosted many top-notch dinner parties featuring France’s biggest names in politics, finance, and business.  In 2007, the brother of the Emir of Qatar bought the residence, for approximately €80 million, knowing that he would invest another nearly €13 million to restore it. 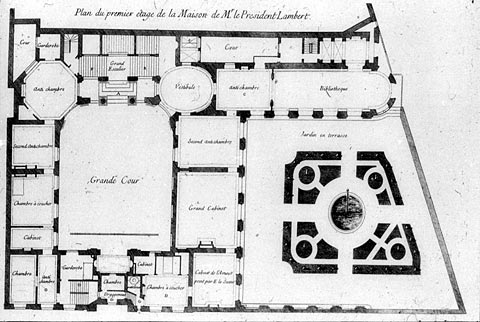 The floor plan of the Hotel Lambert by architect Le Vau

Five years later, and the private mansion is still undergoing construction.  So, where is the controversy?  First, it came into play when the Emir wanted to pierce the 17th century wall surrounding the property to install an electric gate to enclose his private parking area.  His plan also reportedly included plans to install lifts, an underground car park, and a number of security measures, including digging under the garden and raising the 17th-century garden wall about 80 cm. Mayor Delanoë denied several of the exterior altering requests, but all changes to the interior of the mansion were left up to the decision of the Ministry of Culture.

Hotel Lambert around 2007, before renovations had begun.

L’Express featured details surrounding several controversial restoration decisions made by Hotel Lambert’s new owner in an article from 2009, in which art historian and Sorbonne lecturer on “specialist architecture in the modern age” Alexandre Gady stated that each of the new renovations to the building would be severe breaches in the authenticity of the monument.  In 2010, conservative citizens even established this blog to ‘Save Hotel Lambert!”

Library for Baron Alexis de Rede in the Hotel Lambert

Some believe it is better that the private mansion was bought by a wealthy individual, rather than being handed over to the government and turned into a museum for tourists.  At least this way, they say, the architectural beauty and history can be property cared for, and the mansion will be used according to its original purpose.

Some also wonder why the wealthy royal is facing such strong protests against his plans to modernize the mansion, considering there were no protests at the demolition of another one of architect Le Vau’s 17th century private mansions, Hotel Hesselin, by an American owner in 1934.

Construction was officially given the green light in 2009, and three years later, plans are moving forward on the renovation of Hotel Lambert.  Hopefully we will soon be able to see this piece of French architectural history restored to today’s standards of luxury.