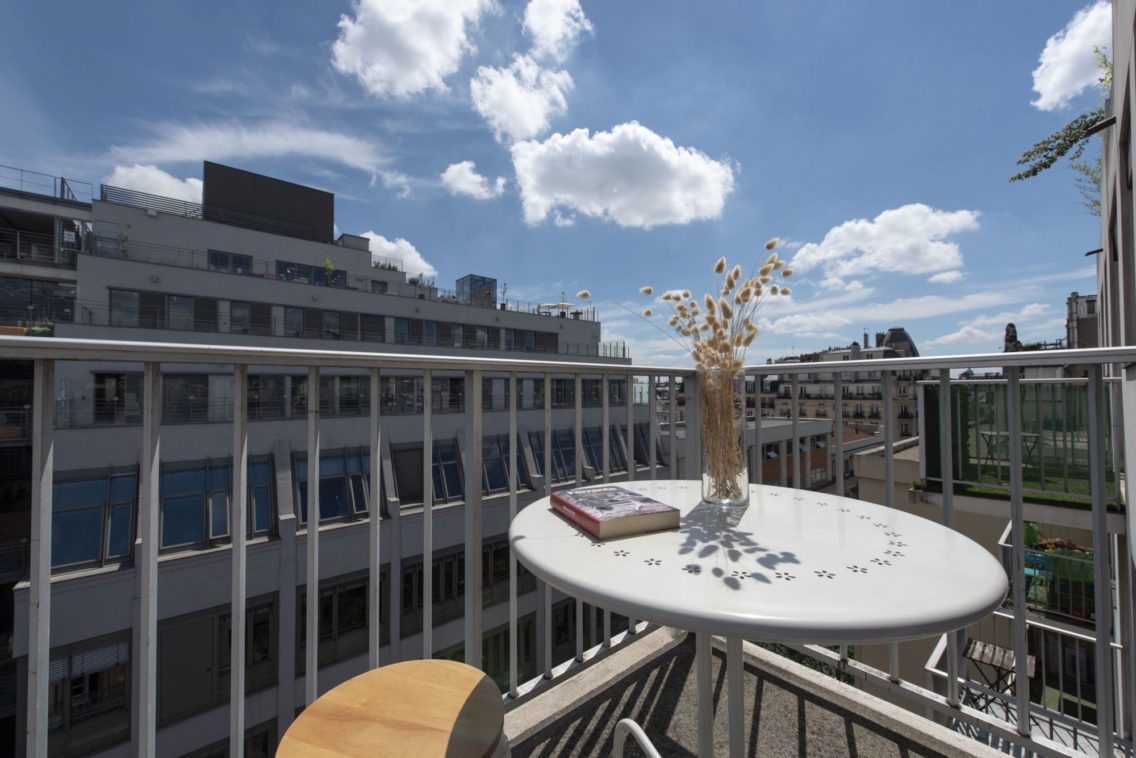 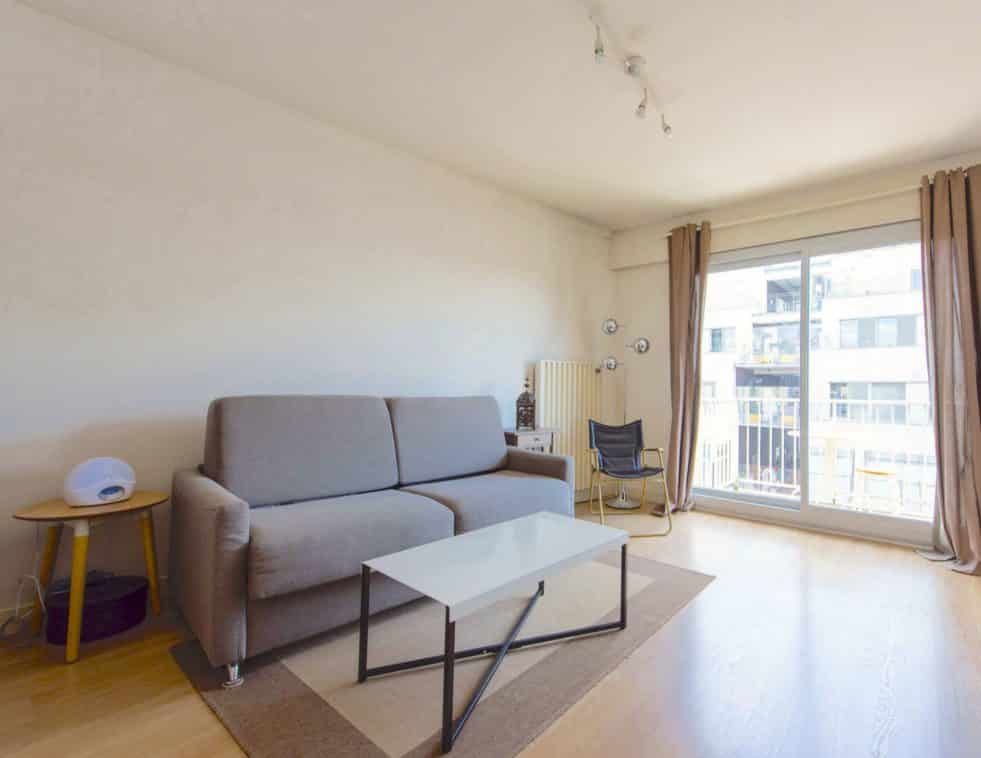 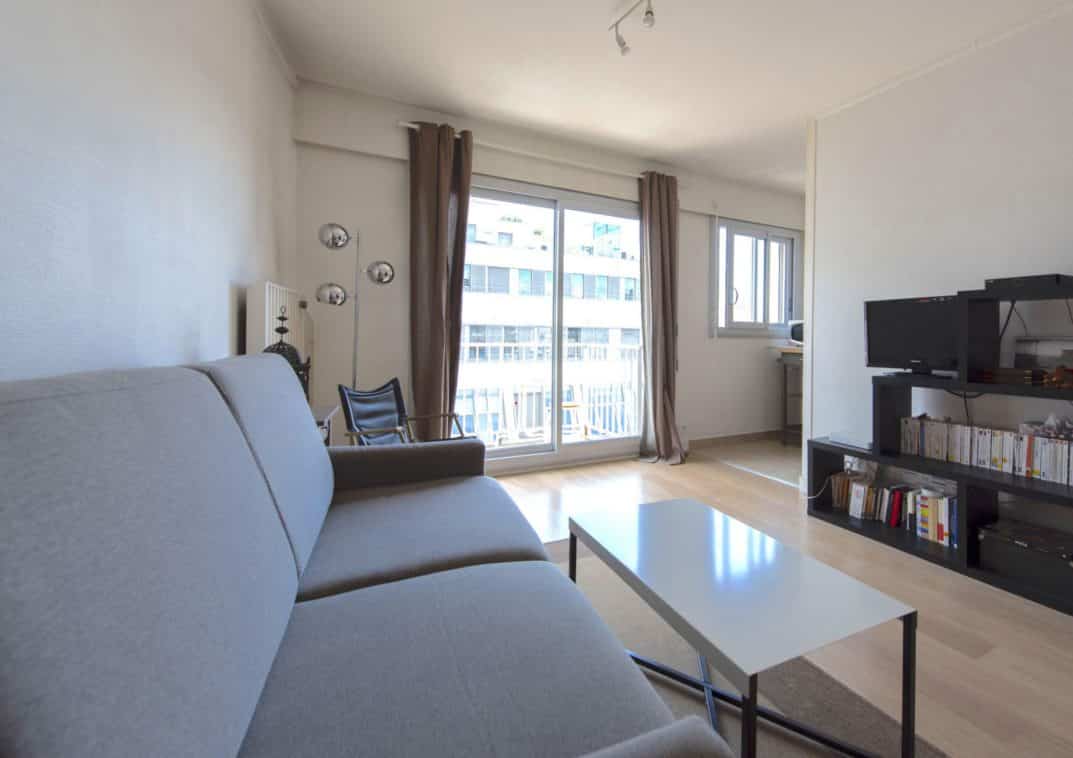 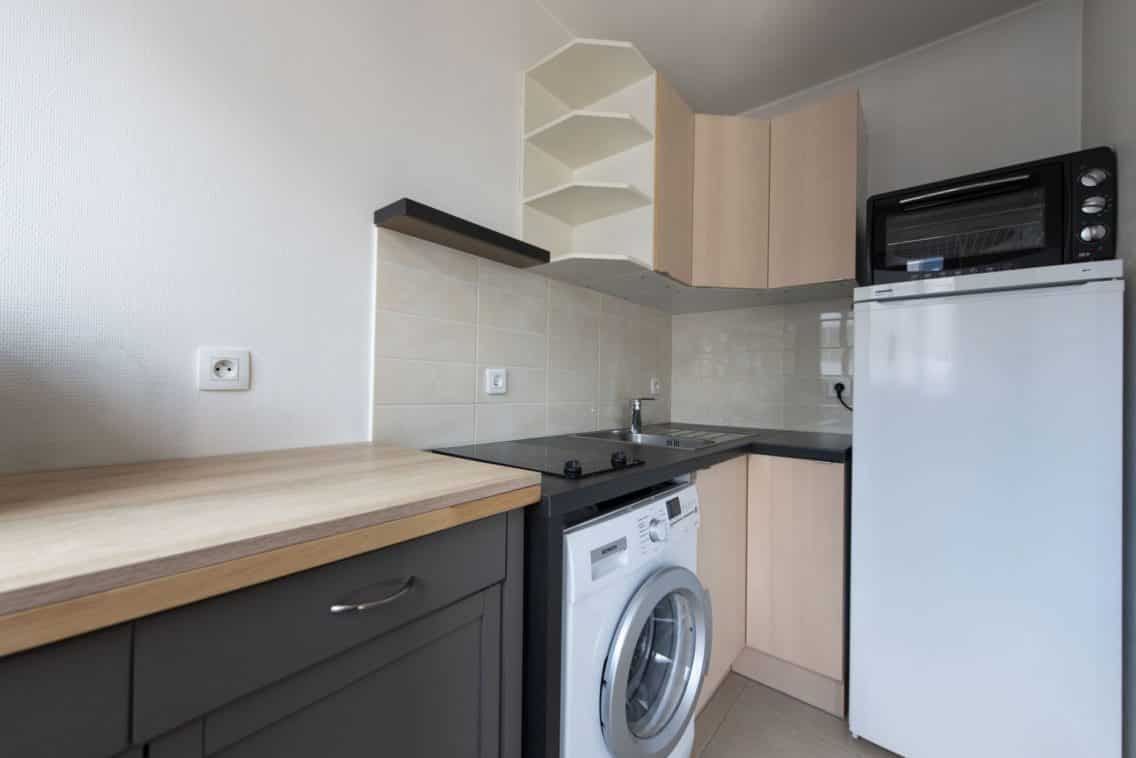 Renovated studio apartment with terrace in the 11th arrondissement near the Marais and the Richard Lenoir street market
€ 343,500
SOLD
inquire about this property

Studio apartment with terrace in the 11th arrondissement near the Marais

Located on rue Chemin Vert in the 11th arrondissement (adjacent to the Marais, and near the Richard Lenoir street market), this renovated 27 m2 studio apartment features a terrace of 2.5m2 perched high above Paris on the 8th floor (with elevator). The property includes an entrance, with closet, a main living space, separate kitchen, and bath. The building is well maintained. 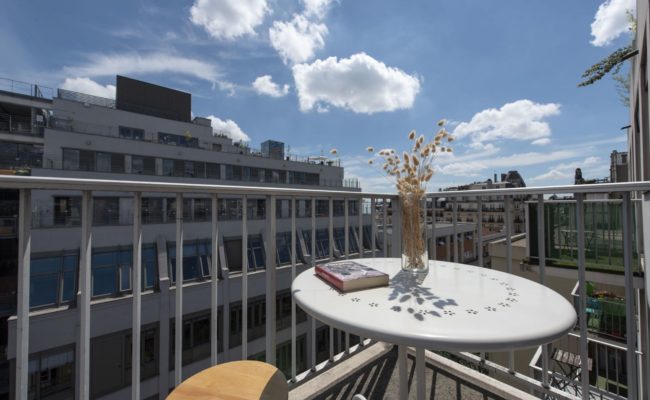 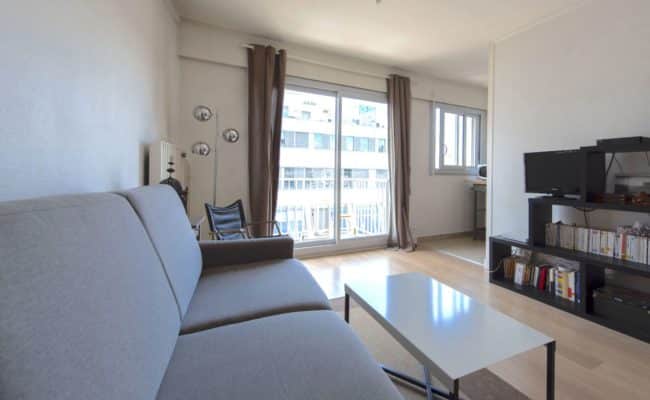 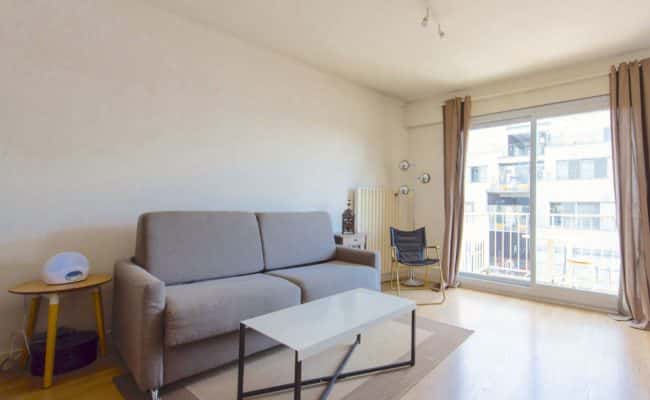 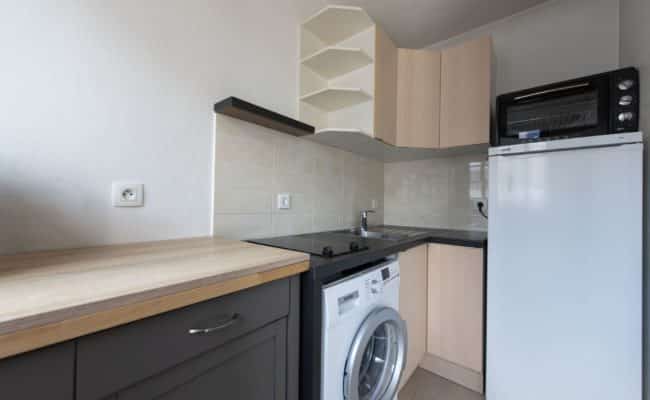 Traditionally a working class neighborhood, the 11th retains a great deal of its grungy, working class feel as it continues to attract more and more of Paris’ artsy, eclectic residents and businesses, particularly in the the streets around the rue Oberkampf. On the Avenue Parmentier, some of the most celebrated chefs in Paris are opening up shop and making this neighborhood a destination even for the west Parisians who might never have set foot there before. At Place de la Bastille, where the 4th, 11th, and 12th arrondissements meet, you will find the modern Opera house of Paris, and plenty of trashy bars and inexpensive restaurants. Along the rue Richard Lenoir heading north from the Bastille is one of Paris’ best outdoor food markets, every Thursday and Sunday. 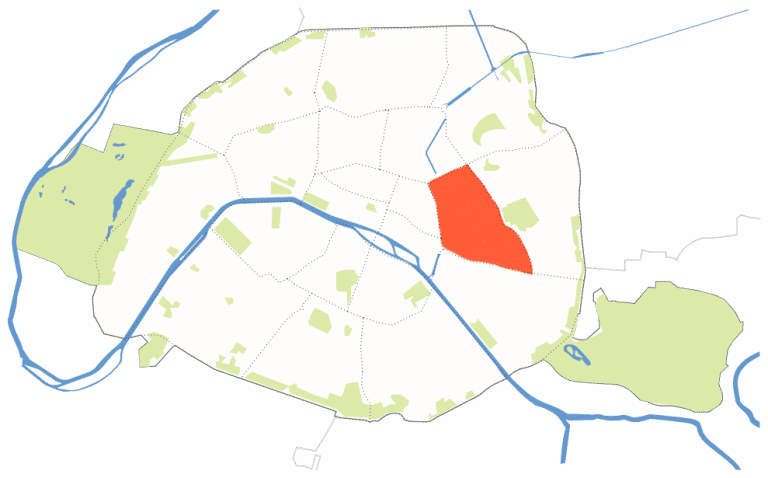 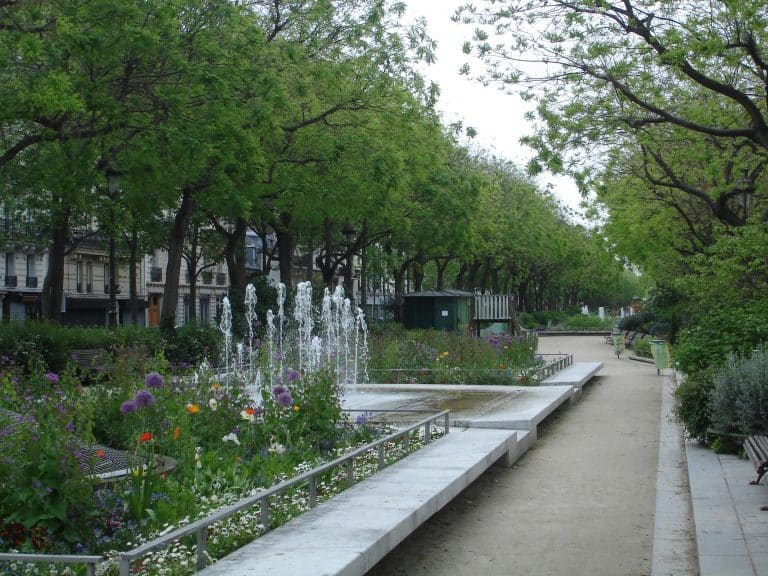 The 11th around the place de la République remains one of Paris’ trendiest spots.  Not surprising for this area well-stocked with restaurants, bars, markets and small shops and its fair share of beautiful apartments. The Oberkampf neighborhood is popular with first-time buyers.  Prices vary widely in the 11th arrondissement, where you can find apartments to renovate in a dated building inexpensively, or in a coveted Hausmannian building for substantially more.

Get to know the 11th arrondissement

While Louis XIV (1643-1715) was exploring the Baroque style, ordinary Parisians of this era saw the development of the humble immeuble de rapport: rental apartment buildings for the middle class which continued in popularity for several hundred years. Found in the 3rd, 4th, 9th, 10th, and 11th arrondissements, the facades are simple cut stone with interior walls made of “Paris stone” (plastered), and a brick fireplace. The floors are oak parquet with parallel slats; the ceilings are medium or low in height. Shorter, less expensive wood beams were used, so rooms were rectangular and small. Most apartments were studios or one bedroom but over the years many have been combined to create larger apartments. The stairwell in this type of building is small but elevators are generally possible.

This style of architecture is also found in these Arrondissements:
3|4|9|10
Post War

In the 1980s, President Mitterrand unveiled a new architectural concept to move Paris into the next millennium. His “grands travaux” brought both praise and horror as they evolved, but no one can deny that the final result is a renewed and diverse city. Mitterrand is responsible for commissioning the Grand Louvre’s new glass pyramid entrance (created by I.M. Pei), the move of the Ministry of Finance into a new building (designed by Paul Chemetov), the Grande Arche de la Defense (by Von Spreckelsen), the Cité de la Musique (by Pritzer-prize winner Christian de Portzamparc), the Institut du Monde Arabe (by Jean Nouvel), the Opera Bastille (by the less-accomplished Carlos Ott), and the new library (by Dominique Perrault), now named the Bibliotèque François-Mitterrand.  Apartment buildings from this period offer large windows and storage space, but lack the architectural details of previous styles.

Parading deceptively as a classic bistro, at least in its décor, this haven of creative cuisine was started by the rebel Basque chef Iñaki Aizpitarte, who puts together astonishing and unusual flavor combinations. These may leave some a bit bewildered, but most are enticed by it, as proven by the month long waiting list to eat here. Reservations are only taken for the first service; the second service is first come, first served. Le Dauphin, next door, is Aizpitarte’s French-style tapas bar with similarly delightful combinations of ingredients but in a strikingly stark décor featuring floor to ceiling white marble.

They did it again. From the creators of Le Chateaubriand is Le Dauphin, a gastronomic small plates restaurant. Inside the bright, white tiled restaurant with curving mirrored walls and earthy wooden accents, is a convivial atmosphere and outstanding gastro-tapas. These small plates are the best way to taste many things from the ever-changing, seasonal menu. Look for menu items such as, seared Wagyu beef or smoked beef tartare, as well as, squid ink risotto and a large selection of natural wines. 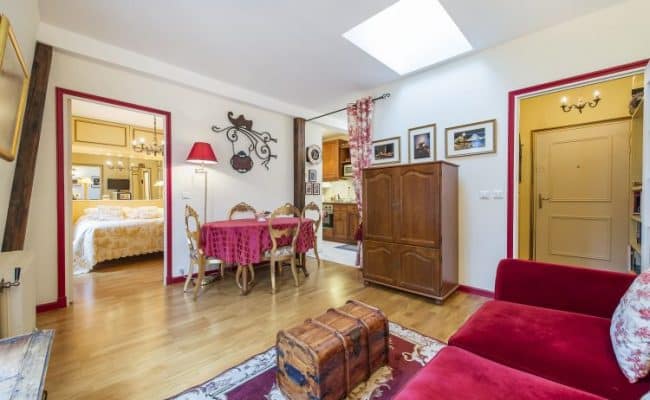 Cour Damoye
75011 Paris
This charming 1 bedroom apartment is located on a cobblestoned private pedestrian street off the Place de la Bastille. The quiet street and building are in a historically protected area free of typical Parisian street noise. This tranquil oasis from the bustling area surrounding it sits on the border between the Marais and Bastille areas.
SOLD
See All Properties