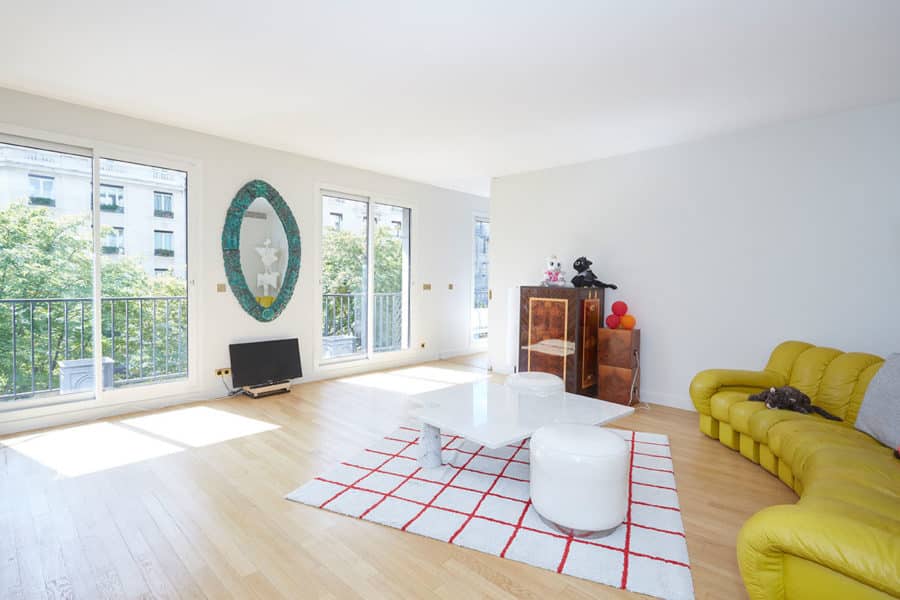 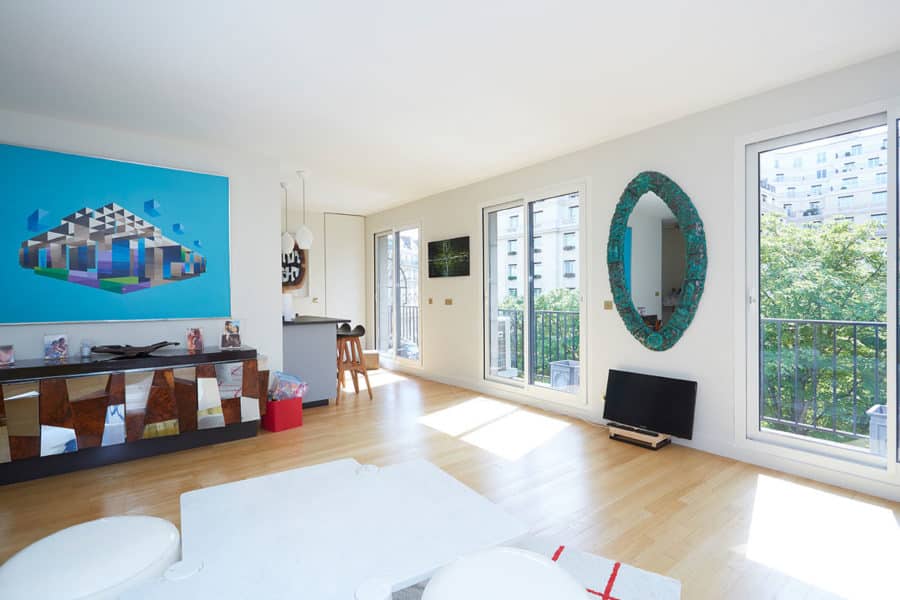 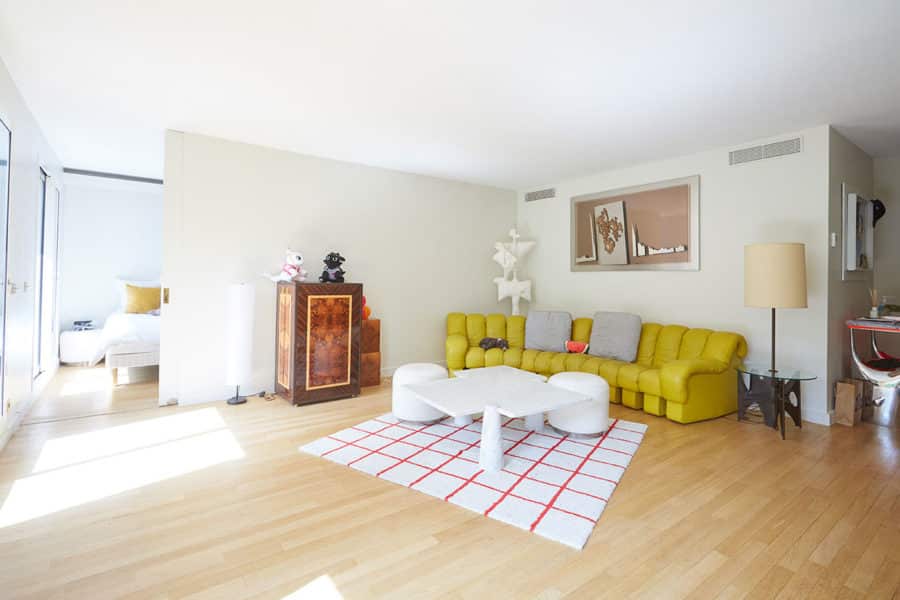 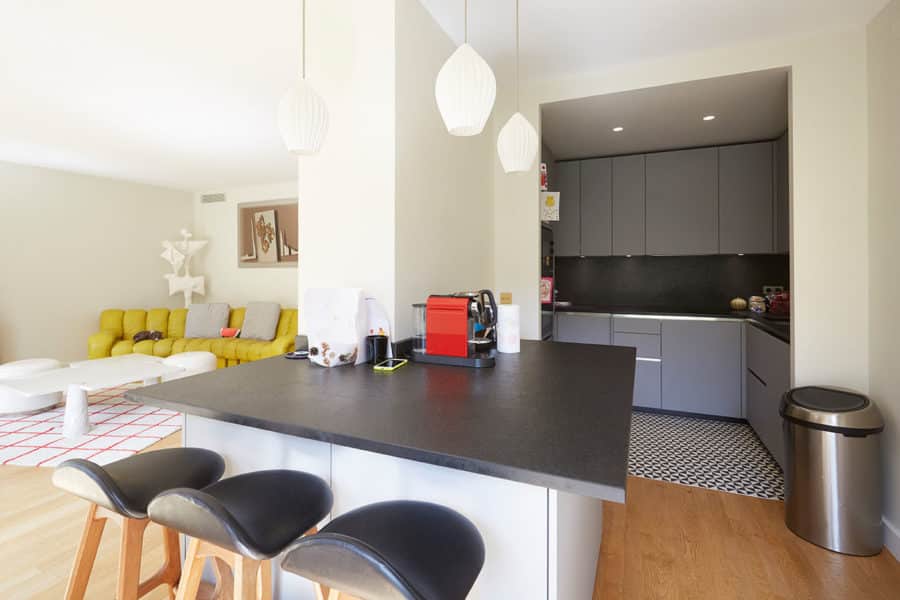 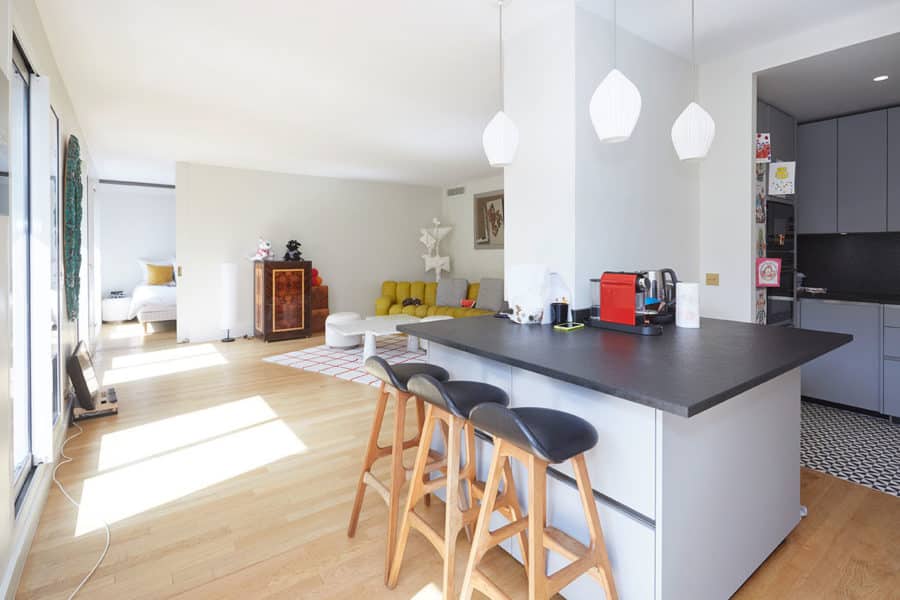 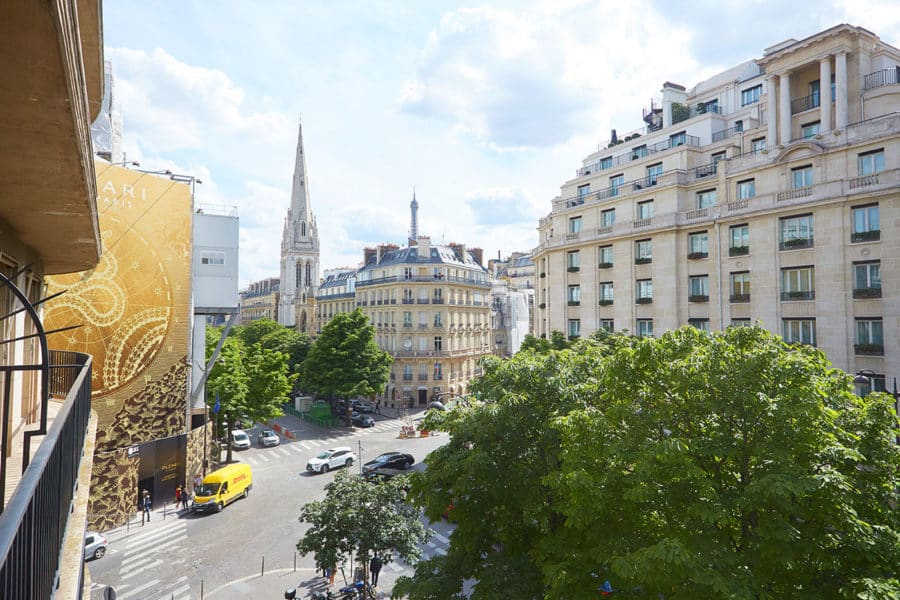 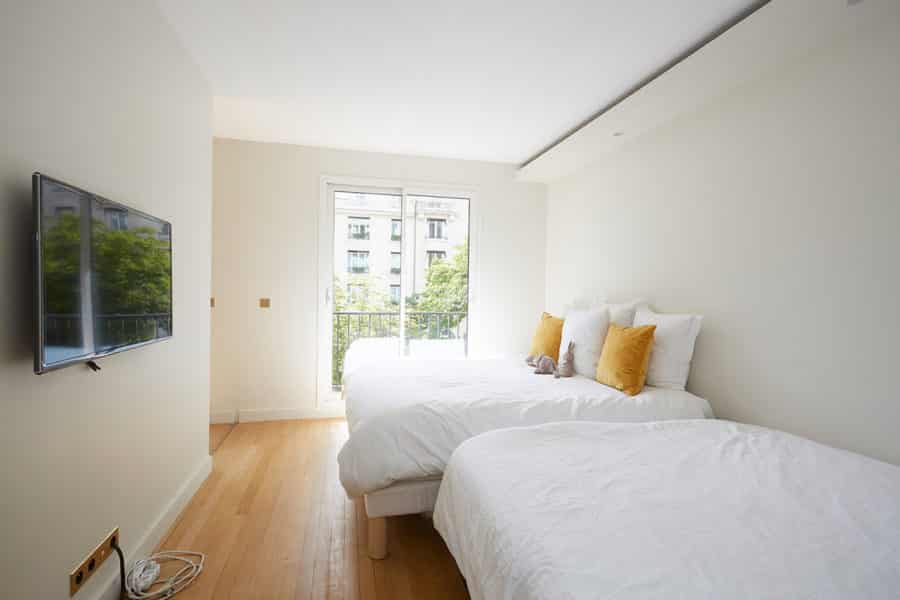 One bed, one bath: spacious and sunny property with amazing views on prestigious Avenue George V
€ 1,795,000
inquire about this property

Discover this one-bedroom apartment for sale in a prime location in the 8th arrondissement in Paris, just a few metres from the famous Avenue des Champs Elysées and Avenue Montaigne.

Located on the fourth floor of a secure building with a concierge and a lift, this apartment for sale spans 80 square metres and has been recently renovated, meaning it will be ready to live in or rent out straight away.

This is a perfect opportunity for those looking for a pied-à-terre in a prestigious address. Should the future owner decide to rent out the property, it is possible to earn long-term rental yields of €2,500 per month.

The apartment features one bedroom, a fully equipped kitchen, a bathroom and well-lit, open-plan living and dining space. The living area also opens up onto a balcony that spans the entire length of the apartment. In addition, this apartment benefits from air conditioning, something of a rarity in the capital, and a cellar.

Without a doubt, one of the most exciting aspects of this apartment is its superb location. It is situated just a stone’s throw from the Avenue des Champs Elysées, one of the finest high-end shopping streets in the world. Just in front of the prestigious palace hotel Georges V, the apartment is also close to two metro stations. Georges V and Franklin Roosevelt stations on the main metro line are just five minutes’ walk away.

Though the 8th arrondissement is often synonymous with shopping, there is plenty more to see and do. Bookended by the iconic l’Arc de Triomphe and the Place de la Concorde, the 8th arrondissement is home to some of the city’s most emblematic landmarks such as Église de la Madeleine, the Champs Elysées and Le Grand Palais. It is also one of the major business centres in the capital.

A true paradise for foodies, the 8th arrondissement is rightly proclaimed the haute-cuisine capital of the city thanks to its plethora of Michelin-starred restaurants. 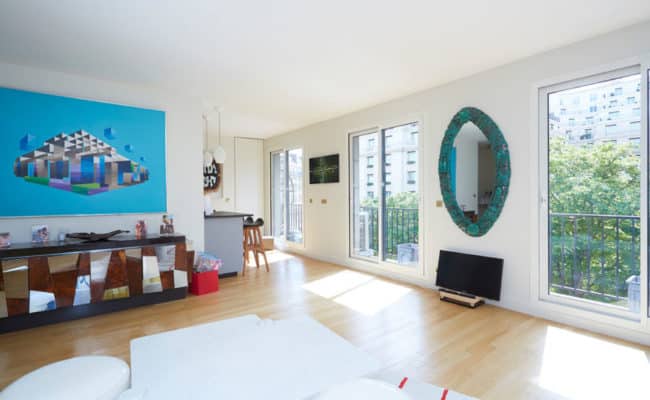 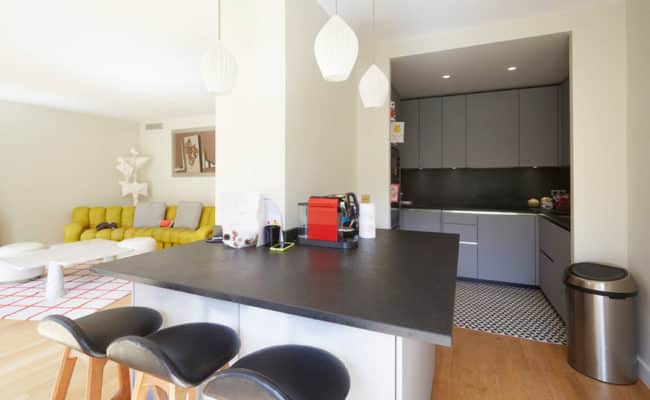 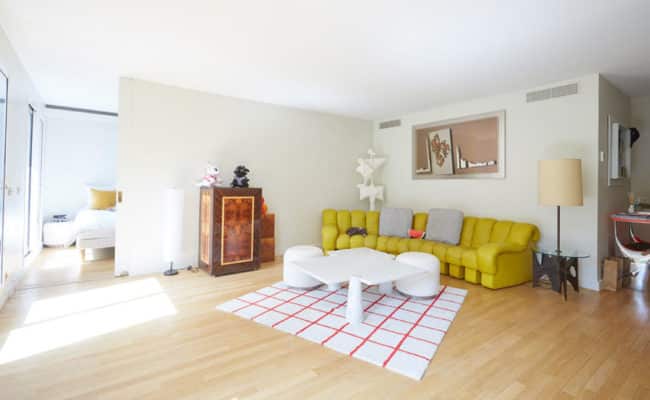 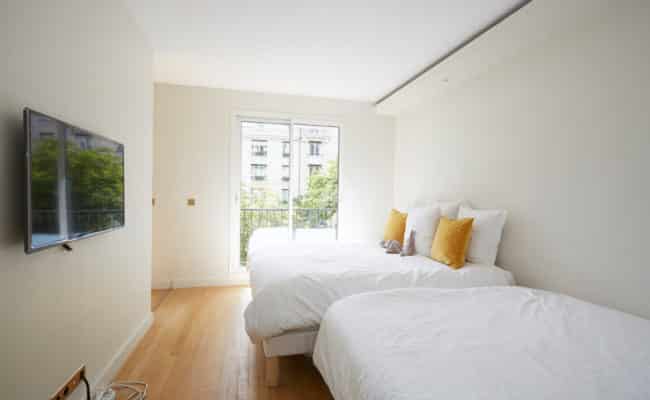 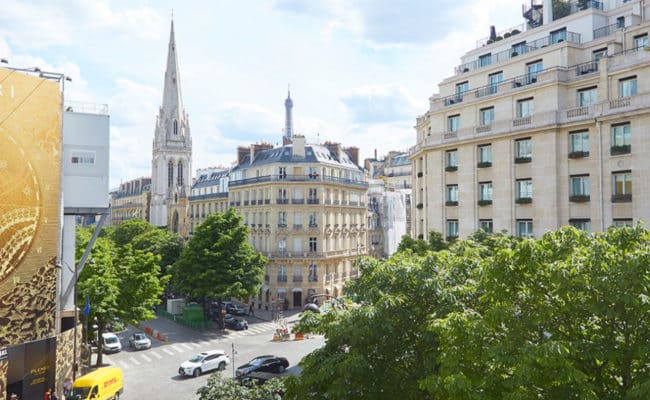 The epicenter of luxury shopping, 5-star hotels, 3-star Michelin restaurants and glamorous clubs, the 8th is the flashy side of Paris with property prices to match. While most of the bling and glitter stays within the golden triangle- bordered by three stations, Étoile, Concorde, and Pont l’Alma – throughout the rest of the 8th one finds neighborhoods with a more urban feel and every-day shops and markets. The area around Parc Monceau is especially sought-after as it is calm, residential, and consistently beautiful buildings. 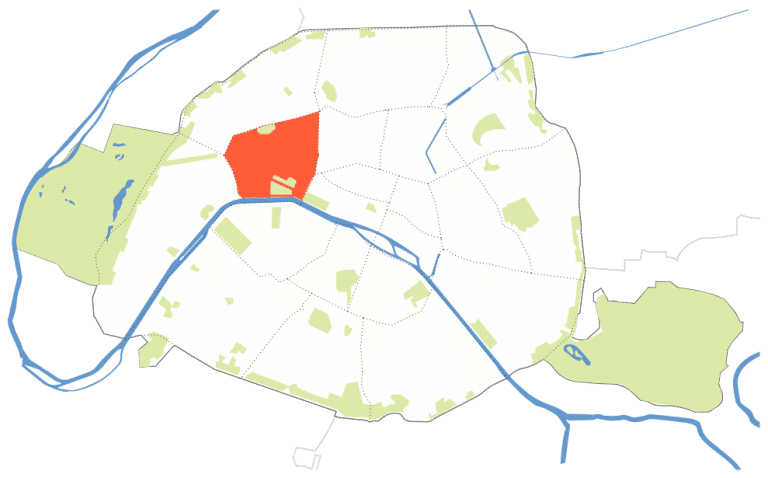 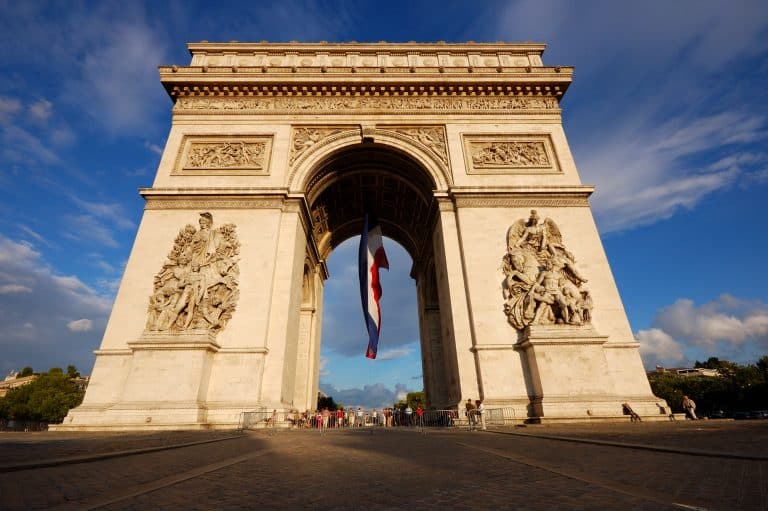 The golden triangle of Etoile-Concorde-Alma has gone platinum. A luxury apartment on avenue Montaigne can sell for  €25,000/m² and up, and on neighboring streets prices are not far behind in this an area that particularly attracts foreign buyers in addition to Paris residents.  Apartments larger than 200m² are plentiful in the historically wealthy district around avenues Hoche and Friedland, and so are relatively reasonable prices.   Average price: 10,465 €/m2, ranging from 7,481 € to 20,726 € /m2 depending on the area.

Get to know the 8th arrondissement

When the Sun King finally died, the heavy Baroque style was as exhausted as the overtaxed peasants. Louis’ great-grandson, Louis XV took the throne in 1715, just as Paris was beginning a new intellectual period known as the Enlightenment. Some of the great hôtels (mansions) of this period include the Hôtel de Matignon, where the Premier of France now lives, and the Hôtel d’Evreux, residence of the President. In 1748, at the height of the style, Jacques-Ange Gabriel designed Place Louis XV, now known as Place de la Concorde. Rococo brought improvements in practical aspects of architecture: chimneys became more efficient, sanitation was improved, and rooms were arranged with more consideration for privacy. Residential life was creeping closer to what we would recognize today.

This style of architecture is also found in these Arrondissements:
1
Renaissance

When François I took over the French throne, he surrounded himself with the best creative minds of the time, inviting Leonardo da Vinci to Paris and hiring Italian architects to renovate the Louvre; the French capital surged with life and new buildings.

When François died in 1547, the city was torn apart by Catholic and Protestant factions. Henri IV, finally brought peace to Paris and was determined to restore its brilliance. He completed the Pont Neuf, extended the Louvre and reorganized the entranceways of the city. His most beautiful public legacy is the Place Royale. This was also the era of the magnificent private urban chateaux known as “hôtels particuliers,” which developed in the Latin Quarter, the Faubourg Saint-Germain, and the Quartier du Palais-Royal (Rue Saint-Honoré) for the noble class.

This style of architecture is also found in these Arrondissements:
1|2|4|5|12
Empire

The Revolution devastated Paris and the city’s architecture suffered alongside its people. Royal chambers were torn apart by mobs, churches were looted and demolished, and ordinary apartments burned. Barely a decade after Louis XVI was decapitated, Napoleon was firmly in power. The Napoleonic style is a mishmash of neo-classic impulses. Decoration was stimulated by excavations in Pompeii and archeological discoveries in Greece. Classical references pleased Napoleon, since they suited his ambitions for an expanding Empire. Napoleon wisely set up massive building projects to keep Parisians employed, and his largest urban projects shaped today’s city. Napoleon also ordained that streets should be numbered odd on one side, even on the other, a remarkably practical concept that hadn’t occurred to anyone before.

This style of architecture is also found in these Arrondissements:
1|2
Haussmann

By 1853, the city had over 1 million people. Only one house in five had running water; of these, most only had plumbing on the ground floor. Napoleon III tapped Baron Haussmann to renovate Paris. The goal was to ease traffic by creating large boulevards and to promote hygiene by integrating a clean water and sewage system, as well as to house the burgeoning upper class. Featuring an intricate cut stone façade, the common layout in a Haussmannian style building is large apartments (200 to 300 m²) with multiple salons de reception, marble fireplaces, chevron parquet floors, high ceilings with elaborate crown moldings, and a grand stairwell with an elevator to the side rather than in the center. Found around the grand boulevards in the center of Paris and in the 8th, 10th, 14th, 15th,16th, 17th, 18th, 20th arrondissements.

Art Nouveau was a brief fin-de-siecle architectural trend lasting approximately from 1893 to the beginning of World War I. Best known for the style is Hector Guimard. His curving “cigarette smoke” line had already made waves on buildings in the elegant 16th arrondissement, but his Art Nouveau was motivated by a social conscience, much like the Arts and Crafts Movement in Britain. Hired in 1896 to design the metro entrances, he leapt at the chance to design something beautiful for the masses. But when Guimard unveiled his brilliant Métro work in 1900 everyone hated it. The shiny green color was considered unpatriotic, too close to Prussian green, and the writhing insect-like metalwork was much too weird for the public. Time has defeated his critics however, and Guimard’s Art Nouveau Métro entrances have become one of the city’s trademarks.

At the end of World War I, Paris was exuberant—the world had just survived “the war to end all wars. High-speed ocean liners crisscrossed the Atlantic; Surrealism shocked the art world; radios poured out jazz music. The Modern Age had arrived. Trying to express this freedom and movement, architects responded to the jazzy rhythm with angular shapes reminiscent of the new cruise ships. World War II put an end to Art Deco’s optimism and the less-flamboyant lines of pure Modernism took over. Factories from this time have converted into residential use. Turning a loft into a livable space requires consulting an architect. In general, remodeling the interior of a loft will not require approval from building co-owners but any changes affecting the exterior of the building will need building co-owner and city approval.

Go here for the duck magret and foie gras hamburger, as well as the fact that it’s not often you get to eat inside a historical monument done up in a very modern decor. The rest of the food is good too, as you would expect with 3 star Michelin chef, Eric Frechon, overseeing the menu. But getting to eat inside the Grand Palais is the treat here. The terrace in the summer is a must!

Tucked away in a Haussmannian mansion near the Triangle d’Or is Apicius, the two Michelin starred restaurant of Chef Jean-Pierre Vigato. Between the stunning setting, the selection of fine produce, seafood, meats and cheeses from around France, and the convivial atmosphere, Apicius is an oasis in the middle of the 8th arrondissement. Head here for a glass of champagne on the patio bar, or reserve a table for an incredible meal. 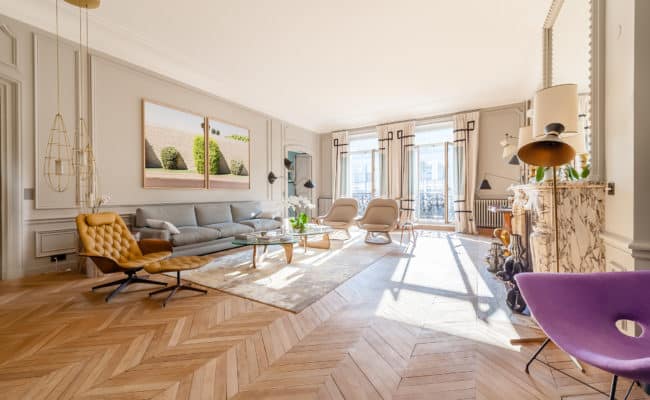 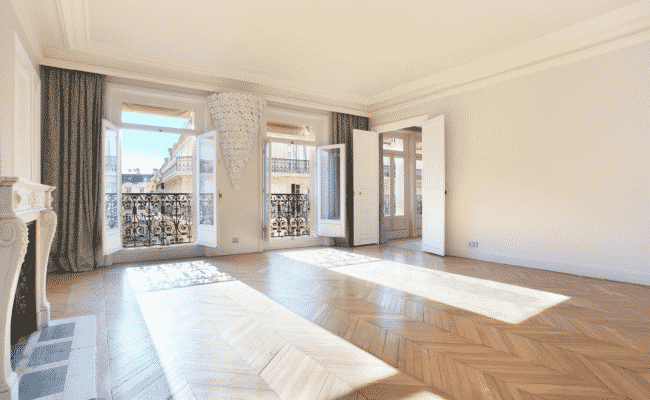 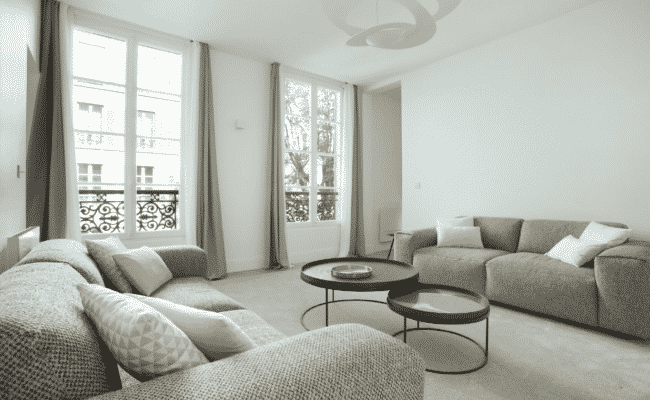 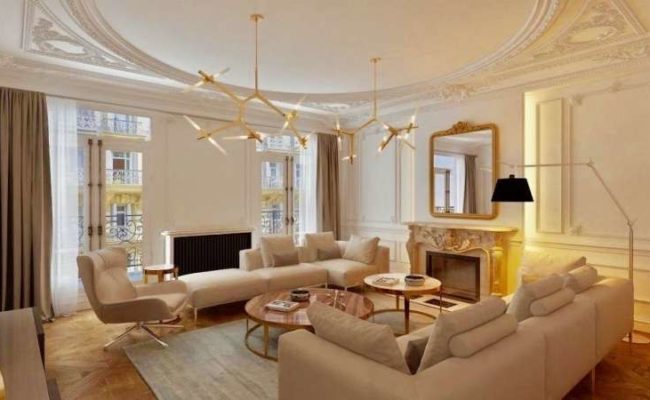