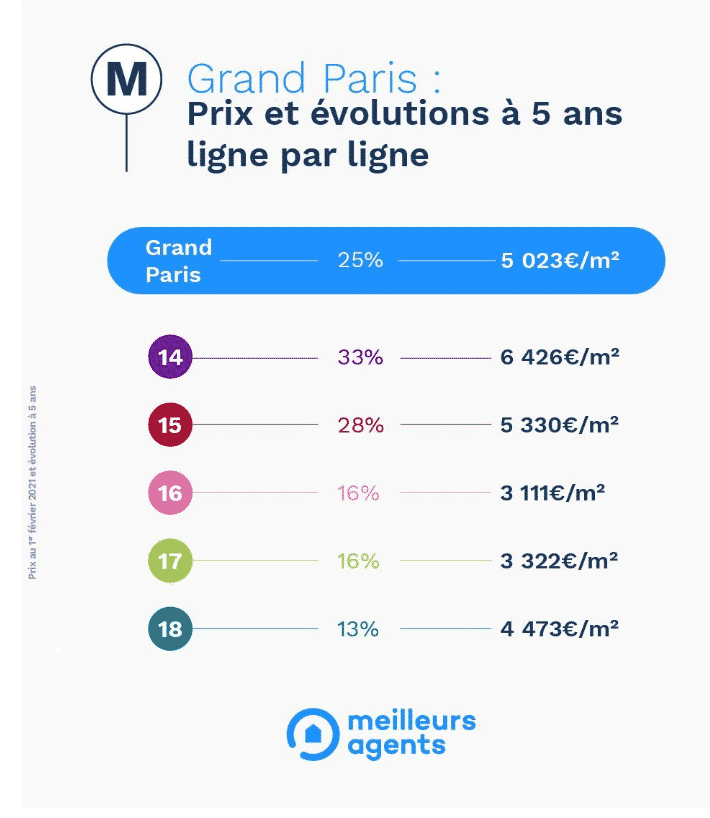 With the opening of four new stations on the line 14 metro extension and with work halfway completed, the Grand Paris Express is becoming a reality. This titanic project, which provides for the creation of 200 kilometers of automated metro lines (i.e. an expansion twice the size of the existing Paris metro network) and 68 new stations, will revolutionize transportation in the Paris region. And, by the same token, it will profoundly change the property market in the Ile-de-France region.

To understand this unprecedented change, Meilleurs Agents is launching its Grand Paris property price observatory. Through an interactive map accessible to all, the leading online property estimation platform allows you to follow the evolution of property prices station by station, in real time.

Meilleurs Agents has been a keen observer of the national and local real estate market for over twelve years and has once again put its know-how in real estate data science at the service of transparency in the sector. Meilleurs Agents now offers to discover in real time the prices per m² (for both buying and renting) of the districts* of the 63 residential stations of the Grand Paris Express and to follow their evolution. All this data can be found on a dedicated interactive map accessible to all, available at this link.

This new tool makes it possible to look at the lines that will be created soon (15, 16, 17 and 18), or that have already been extended in whole or in part (14) and to stop at the station of one’s choice to obtain the relevant real estate price information. 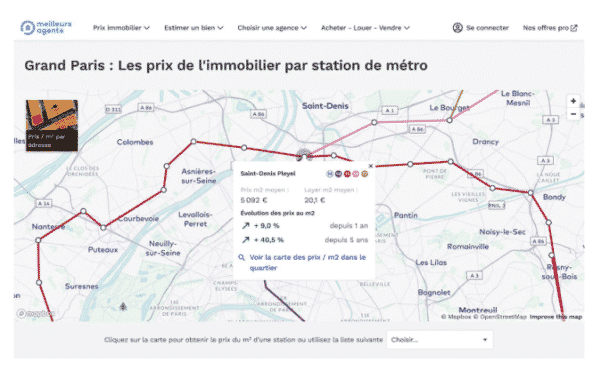 “There is currently no equivalent project in Europe with such an impact on the infrastructure and ecosystem of an area on a regional scale. By shortening travel times and opening up towns on the outskirts of the capital to connect them to the employment pool, the Grand Paris Express offers new opportunities for the people of Ile-de-France in terms of property purchasing power, as prices per m² are half as expensive as in Paris. Our Observatory therefore makes it possible to decipher the trends and identify the new carry-over markets.”says Thomas Lefebvre, Scientific Director of Meilleurs Agents.

Although the inauguration of lines 15, 16, 17 and 18 and the extension of line 14 will take until at least 2030, the impact on prices is already being felt in the towns concerned, particularly around the future stations.  “The variation in prices in 75% of the neighborhoods around the stations outperforms that recorded in the rest of the area. They have in fact increased by 25% on average in five years compared to 19% in the rest of their cities”, underlines Barbara Castillo Rico, head of economic studies for Meilleurs Agents.

While the neighborhoods around the four stations opened in December 2020 and January 2021 have already seen their prices rise by 46% in five years, those around the 25 stations planned for 2024 and the three announced for 2027 have risen by only 22% and 13% respectively.

The only exceptions are the stations on line 15, planned for 2030, which have already recorded an average increase of 29% over the past five years. Some of these districts have seen increases of almost 50% (49.1% around Les Agnettes station, 48.5% at La Défense and 45.5% at Nanterre La Folie). The reason? These sectors are already well connected and in demand in Western Paris. The Grand Paris Express project does not therefore represent a major change in the mobility of these areas.

“The price increase in the neighborhoods near the Grand Paris stations is far from being homogeneous across all the lines. While the neighborhoods of the future stations of lines 16 and 17 have only increased by 16% in 5 years, they have jumped by almost 35% for those around line 14 and 28% for those near line 15. The main explanations for these differences, which are nonetheless significant, are the geographical proximity of line 15 to the capital, and even the fact that line 14 passes through it, as well as the fact that the work will be completed in the nearer future,” adds Barbara Castillo Rico, head of economic research at Meilleurs Agents.

Top 5 cities to invest in

In this context, and based on data from its Grand Paris Property Price Observatory, Meilleurs Agents has identified the five Parisian towns that offer the greatest potential in terms of price trends and property purchasing power in the current environment. Villejuif, Saint-Denis, Bobigny, Bagneux and Gennevilliers are the five cities where Meilleurs Agents believes it is best to invest to take full advantage of the Grand Paris Express.

“The arrival of the metro has acted as a growth accelerator in these cities, which are undergoing a complete transformation. Saint-Denis is a good example of this phenomenon: around its Saint-Denis-Pleyel station, property prices have risen by 40%. The city, which is set to become the most important crossroads of the Grand Paris Express, is becoming the showcase for the transformation of Seine-Saint-Denis for the 2024 Olympic Games. Jobs, transport, housing… The revaluation of this area is considerable” explains Thomas Lefebvre.

Very well connected with other public transport lines, these cities are also in the midst of transformation with urban renewal projects that will change the face of these areas.  One example is Villejuif and its Campus Grand Parc development project (150,000 m² of commercial premises, 3,300 housing units, etc.), where the area around the Gustave Roussy Institute, which is currently not served by the metro, should be opened up by 2024 with the arrival of lines 14 and 15. 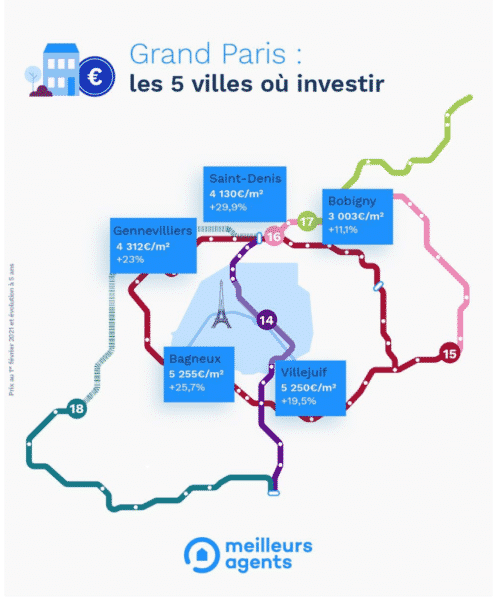 Another example is Saint-Denis, a real hub of Grand Paris, where lines 14, 15, 16 and 17 should arrive in the next three years. The area around the future Saint-Denis Pleyel station is in a prime position to benefit from the construction projects linked to the organization of the 2024 Olympic Games. In addition, this area has twice the density of jobs compared to its population, making the city a major employment area for the region.

Rents down in Paris due to a lack of tourists
Faced with the absence of tourists in Paris and several other major cities, furnished rental properties (usually rented for a few days) are back on the rental market with classic leases, which has led to a drop in prices.   The health crisis is definitely having a major impact on the property market. After a […]

Paris Real Estate 2021: After a year of Covid
Sales Volumes have held up well One year after the start of the health crisis, the time has come for the real estate market to take stock. And one thing is certain: while it was severely tested in its operation, it still held up very well. Particularly in terms of transaction volumes, since 2020 ended […]

Real estate in France: The Illusion of Price Stability
The real estate market is being sealed off at a time when Parisian property prices are stable, while demand is rising in certain provincial areas where supply is drying up.   The average price per square meter in France’s 10 biggest cities excluding Paris is at 2,759€, up 0.2% over one month, as of November […]
Search
Find us on
Facebook
Get the PPG Monthly newsletter