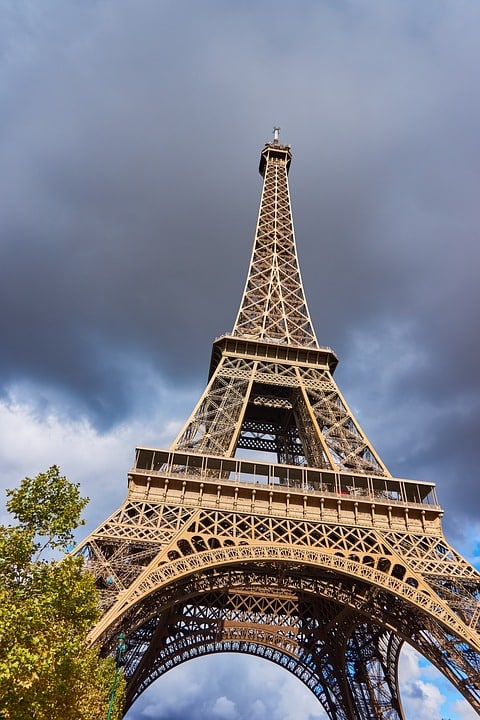 Overwhelmed by heightened security measures, including the installment of a bullet-proof glass barrier, the surroundings of the Eiffel Tower are not the most eye-pleasing as of late.  Even before reaching the never-ending line to access the elevators, visitors must make their way past the multiple construction barriers that surround the four feet of the “Dame de Fer”.  Not to mention the traffic in the surrounding streets, which is more congested than ever.  We have a hard time imagining that the tower will fully shine in all her splendor, in a pleasant and calm environment, before the Olympic Games to take place in the capital in 2024.

This is, however, exactly the ambition of the City of Paris, which launched the project “Grand site tour Eiffel: découvrir, approcher, visiter” last January.  In May, the Deputy Mayors of Paris Jean-Louis Missika (Urban Planning) and Jean-François Martins (Tourism) unveiled the four finalist teams selected to reimagine the site of the Eiffel Tower.

For years now, the City of Paris and the Societé d’exploitation de la tour Eiffel (SETE) have deliberated over the best way to welcome the tourists coming to discover this emblematic site of Paris and of France.  What’s different this time, however, is that the deliberation won’t stop at the four pillars of the tower itself.  The teams must widen their scope to include the surroundings of the site, from Trocadéro to École Militaire, from le Musée du quai Branly to Bir-Hakeim.

The City isn’t looking for an architectural feat here, like la Pyramide du Louvre. “The architectural feat is already there.  This is not about reinventing the Eiffel Tower, but about highlighting it by connecting it to its surroundings,” notes Jean-Louis Missika. “Studies have shown that a visit to this monument is not only limited to the confines of its vertical dimensions, but starts as soon as it is seen.”  In fact, during peak tourist season, some 120,000 people a day are said to visit the Eiffel Tower, whilst only 20,000 to 30,000 actually climb it.  Most people, thus, are happy to walk under and around it, taking a souvenir photo along the way.

Among the four teams chosen as finalists for the project, two are lead by architects, the British firm AL_A Amanda Levete Architects and the Parisian company KOZ Architects; and two are led by landscape architects, Gustafson Porter + Brown from London and the French team TER.  All groups, however, are highly skilled across multiple disciplines in the global sphere.  The architects from TER have joined forces with Italian engineering architect Carlo Ratti, among others, while those from Gustafson will work with the urban planners from the Sathy agency, under Franco-Korean Tae-hoon Yoon.  AL_A will work in partnership with two chief architects from Monuments historiques français and KOZ has recruited Junya Ishigami, the Japanese architect known for his refined style, respectful of historical sites.

“Beyond the international scope, what captured our attention was the nuanced approach to landscape and urban integration that these teams were able to demonstrate through the references they highlighted, i.e. the ability to adapt to a complex environment, to understand its purpose, all while respecting its patrimonial importance,” emphasizes Jean François Mangin, project manager.

The teams must rethink how the Eiffel Tower welcomes visitors, from the metro stations closest to the site, to the open square under and around the tower, to the four pillars of the tower itself.  The teams must also prioritize the simplification and improved fluidity of the waiting lines to climb the tower, all while reflecting on how to provide services and facilities, dining options, and weather protection.

Beyond this, the project involves the creation of new walking paths featuring welcome centers offering information, relaxation areas, recreation areas, and eateries.  This will involve rethinking traffic flow at the intersections located on either side of pont d’Iéna, now entirely devoted to cars, in order to provide designated paths for pedestrians as well as those on bikes, scooters, rollerblades, etc.  This could mean, as suggested by one elected official, opening the tunnel located under quai Branly at bridge level to those using modes of transportation other than just cars. Some go so far as to dream of seeing the largest Parisian park emerge from this project, with one end on each side of the Seine.

Being classified wooded areas, any plans for construction on the Champ-de-Mars and les jardins du Trocadéro are not possible.  However, the idea here is to restore the life of the numerous historic pavilions dotting these areas, with the help of les Architectes des bâtiments de France.  These pavilions, dating back to the 30’s, are rather neglected today and could be reimagined to play host to small boutiques, activities and events, and seasonal popup shops, easily dismantled as the seasons change.

“The objective is to create a truly unique visiting experience for tourists by capturing their attention as soon as they first show an interest in seeing the Eiffel Tower, presumably through internet research, and then by offering informational tours allowing them to discover all of the historical and patrimonial wealth this major attraction has to offer,” explains Jean-François Mangin.

At the very least, “this project aims to restore life, coherence and unity to this site, which today consists of a tall attraction, the tower, with nothing else around it.  But the broader goal here is also about bringing back Parisians,” notes Jean-François Martins, Deputy of Tourism. For the City, which has set aside a budget of 40 million euros excluding tax for the redevelopment, an indicator of the project’s success would not be so much an increase in the number of tourists coming to see the Eiffel Tower, which would only be an induced effect of the renovations, but the return of Parisians and residents of Greater Paris to the site.

The winning team will be selected in May 2019 and the project must be completed in time for the 2024 Olympic Games.

For sale: St. Remy de Provence estate of fashion icon Betty Catroux
We are fortunate to be able to offer for sale, the iconic home of this legendary French fashion muse in St. Remy de Provence.  Images shared graciously by the Catroux family. This year, in 2020, the Musée Yves Saint Laurent Paris is devoting a special exhibition to Betty Catroux, fashion icon and Yves Saint Laurent’s […]
Search
Find us on
Facebook
Get the PPG Monthly newsletter