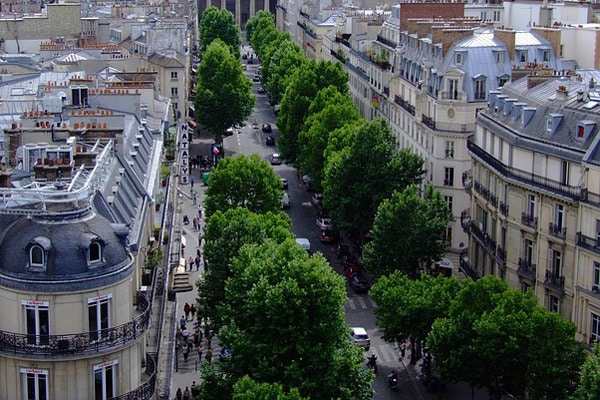 Which Paris streets have the highest property values in each arrondissement?

For each arrondissement of Paris, MeilleursAgents.com has identified the street, the avenue, the passage, or even the square, where the average property value per square meter is the highest.

This list is based on the median price of real estate per square meter of the street. Some lanes deemed “too small” were deliberately discarded in order to establish this classification, for reasons of methodology and statistical relevance.

Among these upscale streets in each district, some are historic routes, like Place de la Bastille.  Others, surprisingly, are more discreet, like the verdant Allée des Brouillards in the 18th arrondissement.  A special mention is to be given to the 1st, 4th, 6th, 7th and 8th arrondissements, whose streets are among the top five most expensive in all of Paris. In first place of this group is Avenue Montaigne (8th arrondissement), dominating its challengers with a median price of real estate measured at €22,372/m2. It is ahead of Place Dauphine, in the 1st arrondissement (€20,373/m2) and rue de Furstemberg in the 6th (€18,839/m2).

Here is the list of the streets, well-known or hidden, that boast the most expensive average property value per square meter in their arrondissement:

To the west of Île de la Cité, Place Dauphine, where the couple Yves Montant and Simone Signoret lived, is 102 meters long and 67 meters wide. From a real estate point of view, it is the second most expensive square in the capital.

The Picasso Administration, the company defending the artistic rights of the Spanish painter, sits at 8 rue Volney.

This Seine-side wharf, situated to the south of Île Saint-Louis, was built between 1614 and 1646. It pays tribute to Gaston d’Orléans, the brother of King Louis XIII. Median price: €17,729/m2

The Studio des Ursulines, a pioneer in the propagation of arthouse cinema in Paris, was inaugurated in this alleyway in 1926.

At number 6 of this street, the painter Eugène Delacroix established his studio during the last years of his life, between 1857 and 1863. The address now houses a museum dedicated to him.

In this avenue parallel to the Champ de Mars, lived the actor, author, and playwright Sacha Guitry.

This avenue, the Mecca of Parisian luxury, is simply the most expensive avenue in Paris. Its twin is Madison Avenue in New York.

Raymond de Sèze, the lawyer after whom this street is named, had amongst his clients one of the most famous namesakes: King Louis XVI.

This small impasse, which begins at 68 bis Rue René-Boulanger, is less than 3 meters wide. It is located, as the name suggests, on the site of a former wash-house.

La colonne de Juillet, in the center of the square, honors the memory of the victims of the Revolution of 1830, which in three days time, ended the reign of King Charles X.

This street gave its name to a famous storybook, “Contes de la rue Broca”, containing 13 fairytales, many of which have since been turned into cartoons, plays, or songs.

L’École des Hautes Etudes en Sciences Sociales (EHESS) has set up its campus on this street. Pierre Bourdieu, Claude Levi-Strauss, Thomas Piketty, and Jean Tirole are or have been directors of studies at this establishment.

In 2013, Gerard Depardieu put L’Hôtel de Chambon on the market for 50 million euros, located at number 95 on this street.

In the tunnel under this square, Princess Diana lost her life on August 31st, 1997 in a car accident.

At the age of 25, Hubert de Givenchy moved to number 8 of this street, living there from 1952 to 1958.  The fashion house he launched from this locale has since become a famous luxury brand.

This alley north of the Montmartre hill owes its name to springs that, centuries ago, formed clouds of steam. Claude Nougaro wrote a song dedicated to this street. Median price: €14,039/m2

A century ago, this street was home to Le Stade Bergeyre, where soccer matches were hosted during the Paris Olympics in 1924.  Le Stade has since become a park. Median price: €8,797/m2

This small, lane is very popular for walkers, it’s homes and their foliage reminiscent of the old rural Belleville.