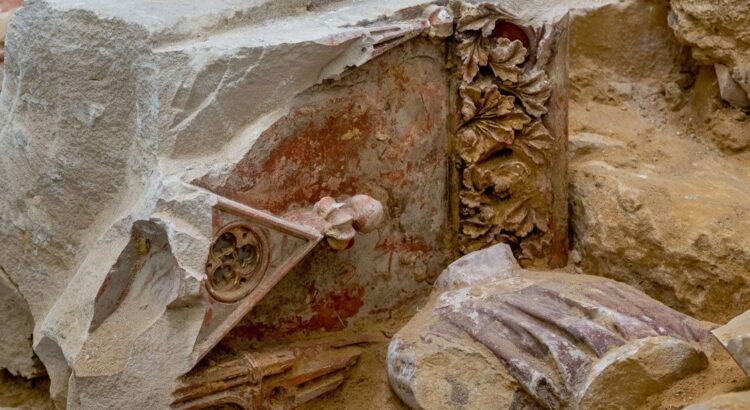 Three years after the fire that devastated the Parisian Notre Dame cathedral, the teams in charge of its restoration are preparing to rebuild its famous lead spire. Preventive excavations have revealed treasures… 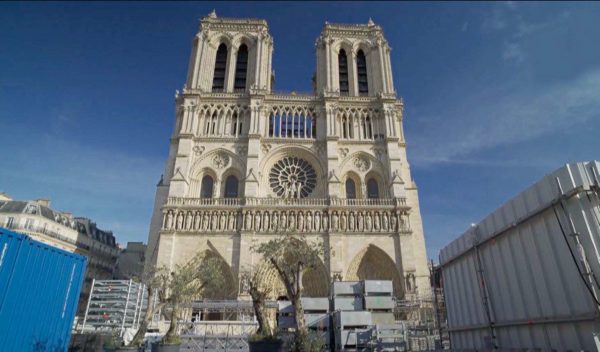 Before tackling the reconstruction of the spire of Notre-Dame de Paris, preventive excavations were carried out at the crossing of the transept. DENIS GLIKSMAN/INRAP

“These are unexpected fields of investigation that are opening up for researchers,” enthuses Philippe Villeneuve, chief architect of historical monuments. 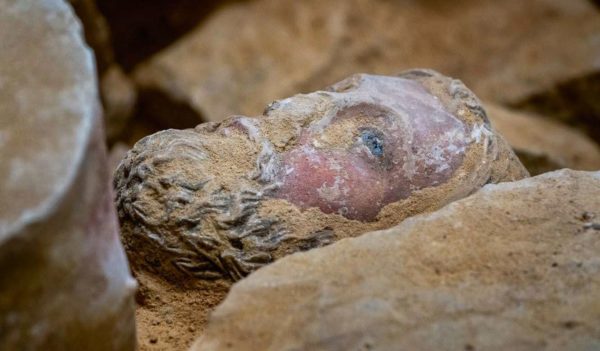 The blocks conceal details of incredible expressiveness, such as this head being disengaged, with its pink face, blue eyes and its flamboyant beard. DENIS GLIKSMAN/INRAP 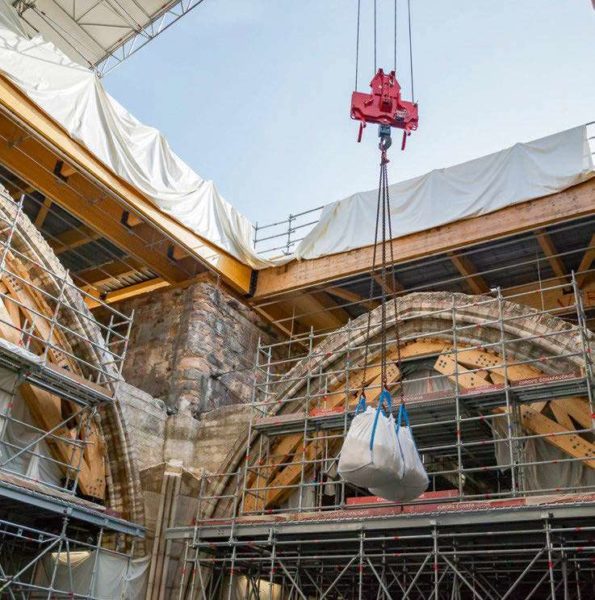 Several levels of ground built in mortar had to be cleared and evacuated by crane. DENIS GLIKSMAN/INRAP 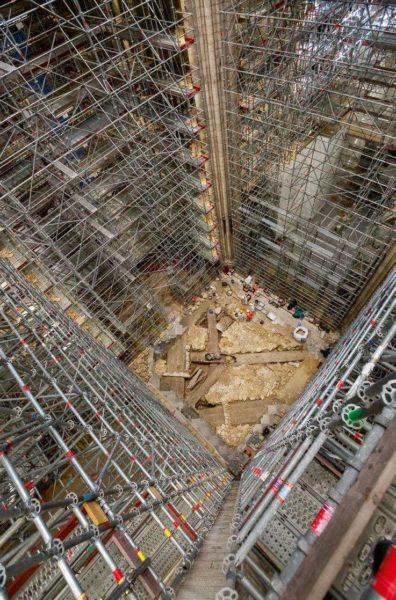 The excavations covered an area of ​​123 m2 and lasted nine weeks, from February 2 to April 8. DENIS GLIKSMAN/INRAP

Three years after the fire that devastated the Parisian cathedral, the teams in charge of its restoration are preparing to rebuild its famous lead spire. But before mounting the huge scaffolding 100 meters high, the State recommended that preventive excavations be carried out at the crossing of the transept, on an area of ​​123 m2. It was Inrap (National Institute for Archaeological Research) that carried out this delicate mission, from February 2 to April 8. “It was planned to dig below the level of the paving, to a thickness of around 40 cm,” explains Dorothée Chaoui-Derieux, chief heritage curator at the regional archeology service. Even if the radars had not detected much at this place, it seemed important to us to intervene before the assembly of the scaffolding, because once the spire is rebuilt, this sector will no longer be accessible for decades, even centuries.” And the archaeologists were not disappointed by the outcome.

No sooner had they started digging than they discovered, a few centimeters below ground level, a slab – a kind of architectural base intended to support other elements – dated between the 14th and 17th centuries. Under this platform, several levels of ground built in mortar (a mixture of sand and lime) reveal traces of a very old fire, probably that of 1218. But above all, it is the embankment that attracts the attention of archaeologists: among the rubble appear sculpted fragments in shimmering colors… The researchers know that they have put their finger on something. “When we started digging, this whole area seemed very disturbed,” remembers Christophe Besnier, head of archaeological research. “After a more thorough cleaning, we realized that the floor contained many painted and sculpted elements whose workmanship reminded us of those from the 13th century.”

In all, there are several hundred lapidary elements, the largest of which weigh nearly 400 kg. And the stylistic analysis of plant decorations, faces, hair or even drapery seems to confirm that these fragments date back to the 13th century! That is to say the time when the famous rood screen of Notre-Dame was erected (1230), the fence which separated the choir (reserved for the clergy) from the nave (open to the faithful), was largely demolished at the beginning of the 18th century.

Only a few vestiges remain today, along the side walls of the choir, plus certain elements brought to light during the work of Viollet-le-Duc in the 19th century and preserved since in the Louvre. Among the new fragments unearthed is a figure with closed eyes which could represent Christ during his descent into the tomb, or a piece of Adam and Eve and the Boiler of Hell, one of the works in the Louvre. “It’s a very fine sculpture,” appreciates Philippe Villeneuve. “The beards, the faces are incredibly expressive. And above all, unlike the fragments removed by Viollet-le-Duc, these are full of color, no doubt because they have been better preserved in the shade of the paving. There’s blue, red, gold, black, it’s really a very beautiful polychromy.” 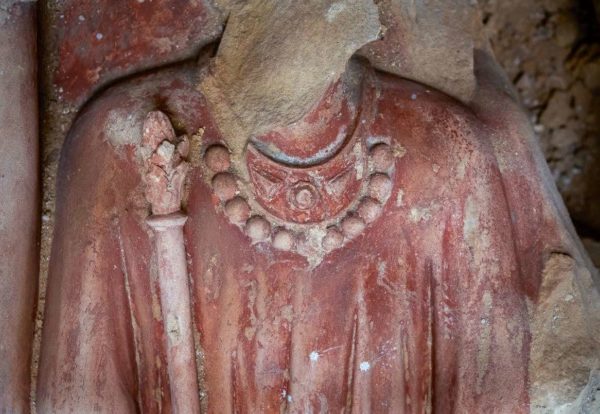 Kept in the shade of the paving, the fragments of the rood screen were able to keep their colors. DENIS GLIKSMAN/INRAP

Here the beautiful red patina of a character with scepter and necklace. 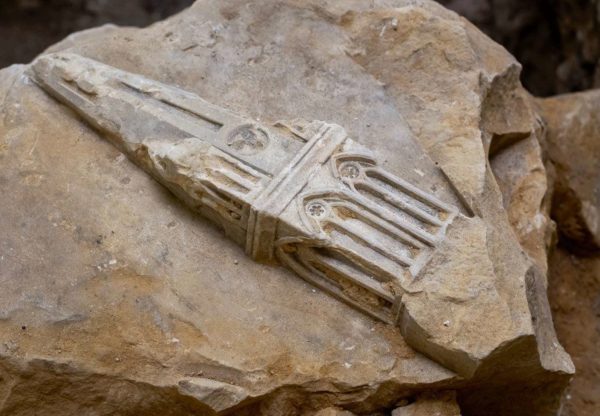 The fragments were apparently held together by a binder. Here, the detail of a block representing a Gothic style building. DENIS GLIKSMAN/INRAP

THE FRAGMENTS SEEM TO HAVE BEEN LAID THERE WITH CARE, IN ORGANIZED LAYERS

In addition to the exceptional artistic qualities of these elements, their arrangement in the pit is of interest to archaeologists. Indeed, they seem to have been deposited there with care, in well-organized layers, before being agglomerated by a binder. “In modern times, from the 18th century, architects wanted to open up the interior of churches: they therefore destroyed these rood screens,” explains Christophe Besnier. “The fact of burying them on the spot is a phenomenon which has been observed in other cathedrals, in Lyon, in Bourges or in Reims. It is a mark of respect for their sanctity. It is an exceptional discovery! » 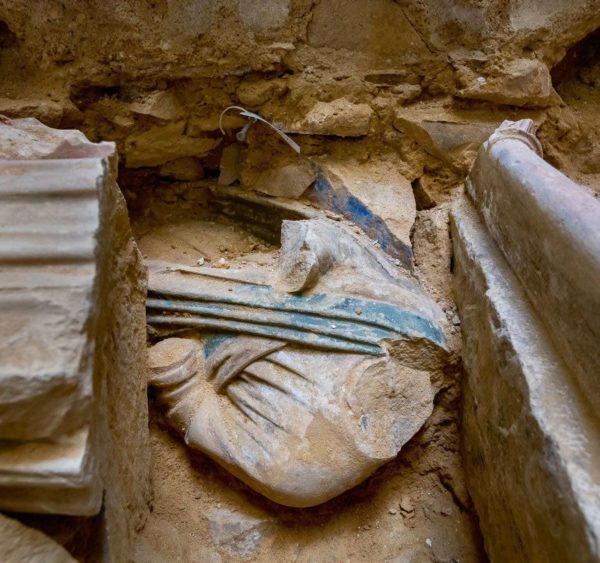 The torso of a statue in the process of being cleared and its drapery which retains a shimmering blue. DENIS GLIKSMAN/INRAP

Certainly, but not the most surprising thing that the archaeologists did during these nine short weeks of excavations. By clearing the embankments of the calorifiers, these brick pipes created by Viollet-le-Duc to heat the cathedral by the ground, they also came across several burials whose dating is estimated between the 14th and 18th centuries. Among them, a dozen plaster sarcophagi, four graves in the ground… and a nugget: an anthropomorphic lead sarcophagus which could well date from the 13th century. “It’s one of the great discoveries of this project, ” rejoices Christophe Besnier. “The stratigraphic elements show that it is sealed by embankments from the middle of the 14th century, so it is a priori earlier. This is very surprising because until then, the sarcophagi found within Notre-Dame dated from the modern era! It will be necessary to confirm its dating before being able to understand why it was placed there. The object, 1.95 m by 48 cm wide, suffered a little during its long stay underground: it has old perforations and was slightly cracked at the top. But these holes are good, since they made it possible to insert an endoscopic camera into the sarcophagus.“The body it contains is in the state of a skeleton, but we can clearly see tufts of hair, perhaps even remnants of skin on the skull, textiles and above all, there is a whole carpet of plants at the level of the head,” details Christophe Besnier. “The fact that these plants are still there suggests that the remains of the deceased and his clothing must be well preserved. We hope to be able to identify it one day.” According to the location where the sarcophagus was found, near the choir, and its material, lead, reserved for the elite, it is certainly a high-ranking personality. It will now be cleaned, which could bring new elements by possibly revealing engravings on its surface. But it will be necessary to wait a few months, the time to bring together a competent team, before it is opened.

THE START OF THE ADVENTURE

Finally, the excavation also made it possible to unearth ceramic furniture dating from the 14th century as well as antique furniture, used in the 19th century to backfill the flue trenches (exhaust ducts) of the heaters. And other elements leave the archaeologists perplexed, like this piece of ancient wall which does not seem to be part of the Gothic building… Between analyzes of the organic remains (including DNA), of the materials and the styls of the works, they have work to be done. “This is only the beginning of a great adventure: at least two years of study will be necessary to understand the iconographic repertoire of the rood screen, as well as its polychromy,” announces Dorothée Chaoui-Derieux.

“We will try to reconstruct it digitally after a 3D scan to formulate hypotheses on its original configuration. The next two or three years will be very rich in scientific results. It opens up very good prospects.”  For the archaeologists of today… and those of tomorrow. Because at the end of the preventive excavations, the surface was completely filled in, while ensuring the reversibility of the operation. It was not concrete that was used, but sand and clay. Thus, the deeper archaeological layers, which have not been excavated, will not be damaged.