The secrets of the Bristol Paris palace

For almost a century, the guests of this former mansion have been enjoying the best of French luxury through the starred restaurant, secret garden, perched swimming pool, and elegant suites. 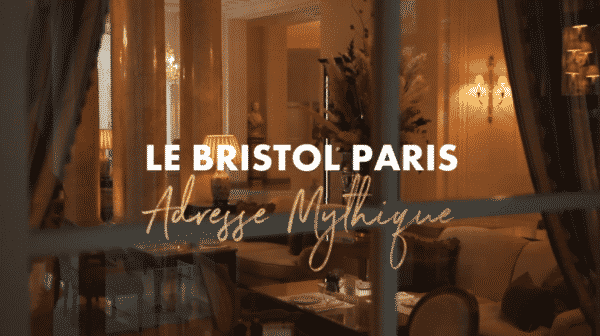 Hippolyte Jammet (1893 – 1964) had a dream of one day opening a luxury hotel that would be the embodiment of his vision of luxury and French savoir-vivre. He was only thirty years old when, in 1923, he discovered the former private mansion of Count Jules de Castellane, unoccupied and abandoned for years, on the prestigious Avenue Matignon, only a stone’s throw away from the Elysée Palace. His decision was made: he would create a place where globe-trotters from around the world could come to be pampered, in a cosy atmosphere as if they were at home. As for the name, it is a fitting tribute to Frederick Hervey, the 4th Earl of Bristol, an extensive traveler with refined tastes.

Hippolyte Jammet was an ingenious visionary. This hotel was not only the first to be equipped with air-conditioning and room service, he also invented the “mirophare”, a tilting magnifying mirror equipped with a bulb and, on the decorative side, a mixture of period furniture and works of art. Then, sensing the imposing danger of the Second World War, Jammet set up an anti-gas shelter in the basement. In 1940, he convinced the American ambassador William Bullitt to make the Bristol Paris the official residence of American citizens passing through the capital. Negotiations were quickly concluded, as Hippolyte Jammet offered to make rooms and services available free of charge. Thanks to this agreement, the establishment remained the only luxury hotel not requisitioned by the occupying army. It instead became a refuge, especially for Léo Lehrman, who hid for three years in suite 106 until the liberation. At night, the architect walked the deserted corridors and drew up plans for its beautification, focusing notably on the winter restaurant – the current Salon Castellane – and the twisted wrought iron grid of the main lift.

A palace for every celebration

On more cheerful days, the Bristol Paris welcomes socialites, politicians and celebrities, who organise magnificent evenings in the heart of the city. Josephine Baker for example, on 24 March 1975, after the kick-off of her show celebrating fifty years of sumptuous hip swinging under the spotlight of the greatest music halls, invited 250 hand-picked guests – Princess Grace of Monaco and Mick Jagger were there – for a celebratory dinner. In April 2018, the palace inaugurated a suite paying tribute to the outstanding dancer and counter-espionage agent during the Second World War. On the wall hangs a sublime picture taken by the Russian-American George Hoyningen-Huene in 1927 as well as snapshots of this famous reception. The Suite 1925, the year the star and activist disembarked at the port of Cherbourg… and when the Bristol Paris opened its doors.

In 1978, Hippolyte’s wife, having taken over as head of the institution, decided to sell the Bristol to the Oetker family, who already owned the Cap-Eden-Roc in Antibes. Renewing the founder’s dreams of greatness, the family undertook numerous renovation works, including the addition of a new wing in 1979: “The entrepreneur acquired a sublime building adjacent to the hotel,” says Leah Marshall, the establishment’s director for the past 10 years. “He worked hand in hand with his daughter, the Countess Bergit Douglas, to restore the former convent of the Little Sisters of Good Hope.” She also supervises the decoration of the rooms and suites, entrusted to the MM-Design architectural firm. The heritage and history of Bristol Paris also strikes Chef Éric Frechon. He joined as a clerk to Émile Tabourdiau, then made his mark at La Tour d’Argent and even at the Crillon as second in command. Although he opened his own restaurant in 1995, the pull of the palace was too great and he returned with great pomp and circumstance in 1999, in the position of Chef. “When I was younger, I used to fantasise about becoming a chef, which would be the culmination of my career,” recalls Éric Frechon. “I came back to the Bristol Paris because the owners were still the same and the family spirit that still reigns here today pleased me a lot. And there’s a real Frechon signature here, whether it’s in a club sandwich or at Epicure, the three-star establishment. I’ve been able to try my hand at everything, which I think is quite unique.”