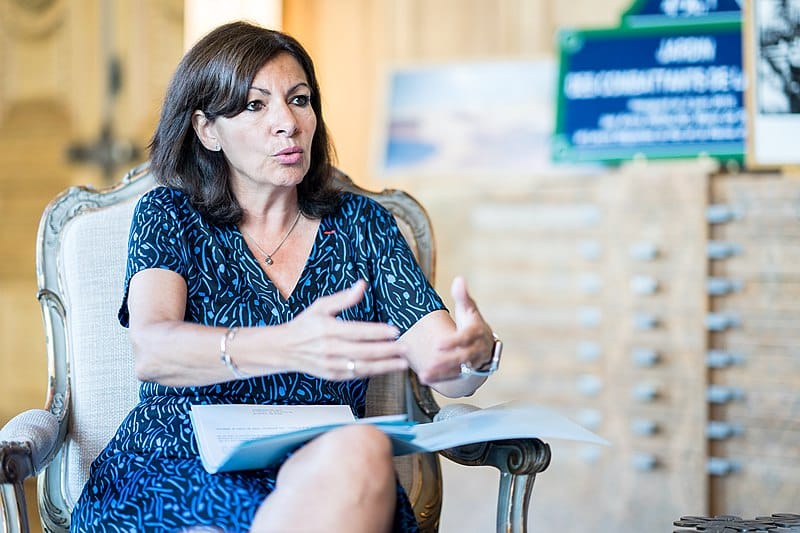 Socialist mayor of Paris Anne Hidalgo sits down with Le Parisien in her first interview since official re-election on July 3rd, an opportunity to confirm her campaign promises, like the creation of “urban forests,” a project that should begin in the near future.

At the end of your campaign, you announced that the 50 km of bike lanes that had been created for post-quarantine transportation would remain on the roadways. Now that you’ve been re-elected, can you confirm this?

ANNE HIDALGO: Parisians have clearly made a choice. They have chosen environmentalism, the pursuit of a project allowing us to breathe better and commute differently. So, yes, we are going to make these bike lines a permanent fixture. In fact, we have started working with the Prefect of Police. On Rue de Rivoli, between Rue du Louvre and La Concorde, we are going to accord more space to buses and taxis, while leaving predominant space for bikers. Moreover, we also want to keep the outdoor terraces, created by restaurants post-quarantine, in place. This will be discussed at the Council of Paris in September.

Will any construction be required if these lanes are made to last?

These lanes will remain as they are because I don’t want to put the city under construction for them, but with David Belliard (Editor’s note: new EELV deputy in charge of Transportation), we will look at what can be done to improve aesthetics. We will also need to make certain lanes more secure: they will be more clearly defined with paint. I’m thinking of the lanes on boulevard Magenta or on the boulevards des Maréchaux in particular.

With these permanent coronapistes, don’t you fear that traffic will be complicated at the start of the new school year?

It’s up to each major city to support this change in modes of transportation. It is clear that Paris needs fewer cars, which means offering alternative forms of public transport: that is why I am fighting for the extension of lines 16 and 17 as part of the Grand Paris Express. That is also why I am pushing for free transportation […] for children up to the age of 18. We must stay the course.

Even if it means that initially we’ll have to accept more traffic jams?

Not really, because traffic has decreased over the past 30 years, a trend that has been even more pronounced over the last six years. Except for protests, or in certain areas where major construction is being carried out, such as Porte Maillot, this decrease in vehicle traffic is very evident and we must continue to support it.

As for other future plans like the 50 km/h speed limit on the ring road or banning diesel vehicles by 2024… Are you confirming these plans? Are you accelerating them?

Banning diesel cars by 2024 and halting the distribution of combustion engines by 2030 were voted unanimously by the Council of Paris. We maintained this course of action during the campaign and Parisians approved, so of course we will continue. As far as the périphérique is concerned, we will continue discussions with the mayors of the affected districts, to decide together on different concrete scenarios. Knowing that by 2024, lanes of traffic will be reserved for public transport, clean vehicles, and carpooling. Between now and then, we will start greening projects on a massive scale along highways.

What other “green” measures will you take?

After my 2014 term, concentrated heavily on bike use in the city, this new term will concentrate on greening projects in order to adapt the city to climate change. Studies concerning urban parks on the square in front of City Hall, near the Garnier Opera House, or near Gare de Lyon, will begin in the very near future. I want to turn these areas into major sites like les Invalides or the Champ-de-Mars. Same for the Eiffel Tower, with the Trocadéro-Pont d’Iéna area to be completed by 2024, and the Champs-Elysées, where we will plant heavily on the lower area towards the Place de la Concorde.

Why have you scheduled a referendum concerning Airbnb for the fall?

The question of housing is a crucial issue for Parisians, as it is their first item of expenditure. We have already done a lot, since social and family housing accounts for 23% of housing in Paris. We need to go further by continuing to produce affordable housing. There is also a reserve of Airbnb-type housing, about 30,000, in Paris. The challenge is to recover them. We are therefore going to ask Parisians whether or not they are in favor of limiting the annual rental period for these apartments in a referendum. This will encourage owners not to put them on the rental market.

What are your quantifiable objectives?

We have created the Foncière de Paris, which will help the middle class acquire housing at a low price by purchasing just the property, with the City remaining the owner of the land. This should equal about 1,000 units of housing per year. We will also continue to create social housing, for which we have set a target of 25% by 2025, which we will achieve. We also need to speed up the transformation of offices into housing as the economic crisis and remote work are changing the game.

Coronavirus is back. Should we worry Parisians or reassure them?

We must remain very vigilant. Parisians were exemplary during lockdown. That’s how we’ve managed to lift quarantine without immediately going back into the red zone. We are, of course, social beings and there was such a desire for quarantine to be over that we noticed some carelessness here and there…

For this reason exactly, was it necessary to host Paris-Plages?

Not all Parisians go on holiday. We had to do it as we did, with a lot of accompanying education on how to stop the spread of the virus along with the distribution of hand sanitizer. We also set up free PCR and antibody tests on the banks of the Seine and at La Villette.

What lessons have you learned from the health crisis?

We found ourselves confronted with a rather delusional government bureaucracy that spent its time producing doctrine and standards to mask shortages. In fact, we are still far from the 700,000 tests promised by the government. One of the lessons I learned is that we needed to create a public health directorate in Paris, because it was clear that we needed flexibility and speed. One of its missions will be to work as closely as possible with the public. By the end of the year, we will already have made good progress, in close cooperation with the AP-HP, of course.

How do you intend to deal with the cost of the epidemic brought on by the City?

As with all cities, Covid-related expenses were essential for obvious health reasons. In Paris the crisis cost 565 million euros. Fortunately, the City of Paris is well managed and we were able to dip into our savings. However, solutions must be found that will enable local authorities to continue to maintain economic and social aid efforts, while also continuing to invest. In any case, we need to be able to benefit from the recovery plan at the State level.

You have called for a reexamination of the Olympic Games project.  Why did you do that?

It’s the right time to do so, because the next four years are going to go by very quickly. Covid is making it difficult for a number of partnerships. Regarding the infrastructure needed for the games, the Olympic and Paralympic villages, we’re not behind schedule. But concerning delivery and all operations surrounding it, there may be some things we can review to lower the overall bill. We will soon have meetings with Michel Cadot, the new interdepartmental delegate, Tony Estanguet, regional and city-wide representatives, and representatives from Seine-Saint-Denis. Two things seem very important to me: to lower neither our ambitious environmental goals, nor the long-term facilities planned for Seine-Saint-Denis.

Loi de finances 2020:  which measures will affect real estate in France?
This year’s Loi de finances includes many measures of interest to the real estate sector.   Certain real estate tax cut programs already in force will be extended and modified, while tax reforms continue to change the financial landscape for homeowners.  Read ahead for everything you need to know about this year’s changes.    Le […]
Search
Find us on
Facebook
Get the PPG Monthly newsletter