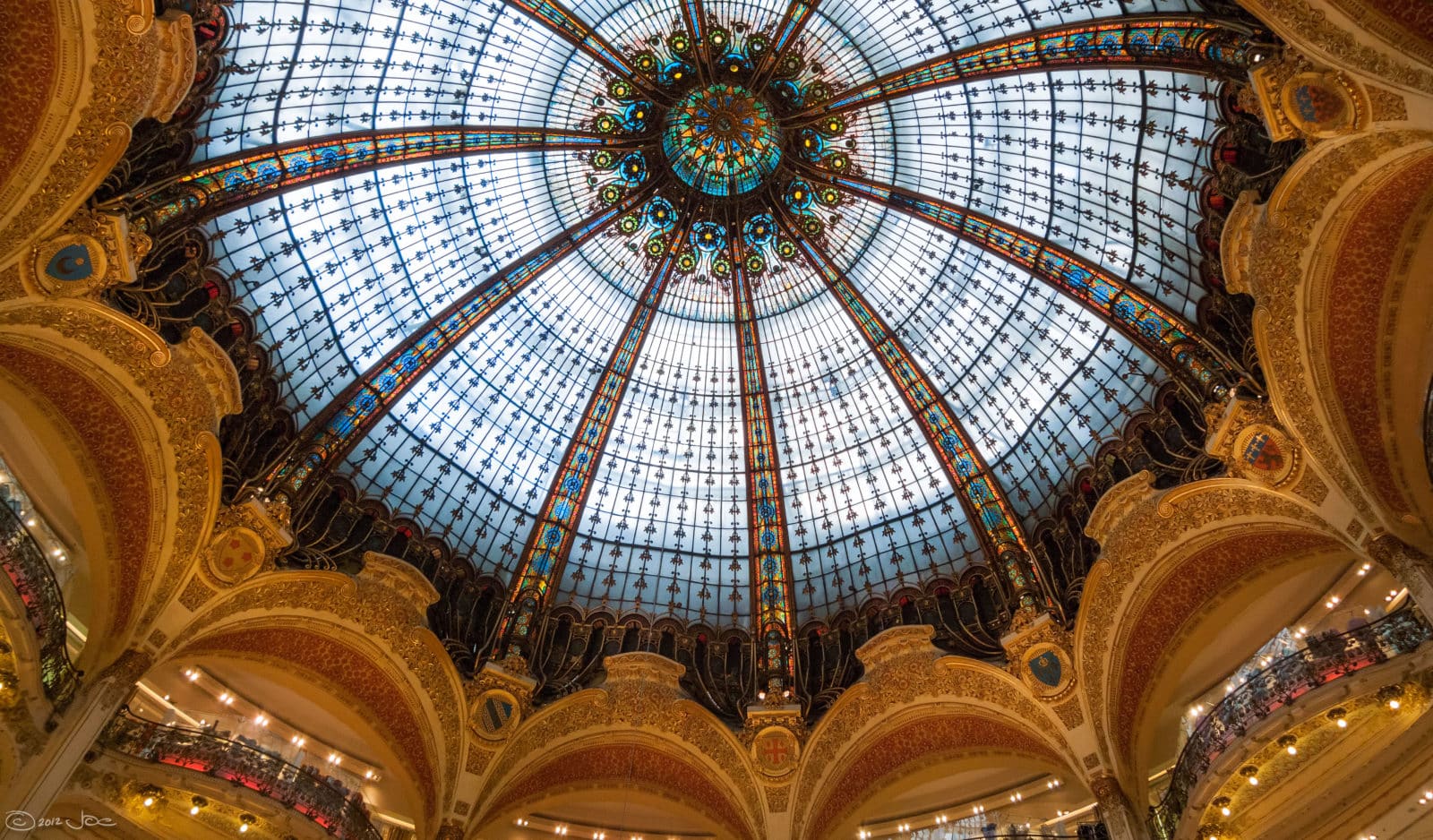 The historic dome of the Galeries Lafayette is being restored

The striking, Art Deco glass dome that has graced major Paris department store Galeries Lafayette for more than 100 years will return to its former luster this summer.

Captivating visitors for more than a century, the celebrated dome of Galeries Lafayette promises to shine even brighter after restorative works.

Erected in 1912 by architect Ferdinand Chanut, this breathtaking work has become a symbol of Paris’s own Mecca of shopping, Galeries Lafayette, founded in 1893 by Alsacian brothers Alphonse Kahn and Théophile Bader.  The renovations, entrusted to the Maison du Vitrail in the 15th, should be finished this summer.  “It’s our first project of such scale,” declares Camille Fimbel, head of archives and heritage at Galeries Lafayette.

As soon as the doors of the legendary department store close for the evening, master glassmakers climb to the topmost floor to access the glass roof, topping out at 43 meters high, where they will eventually remove about 1,000 m2 of stained glass, originally designed by Jacques Grüber, one of the founders of the École de Nancy at the beginning of the 20th century. 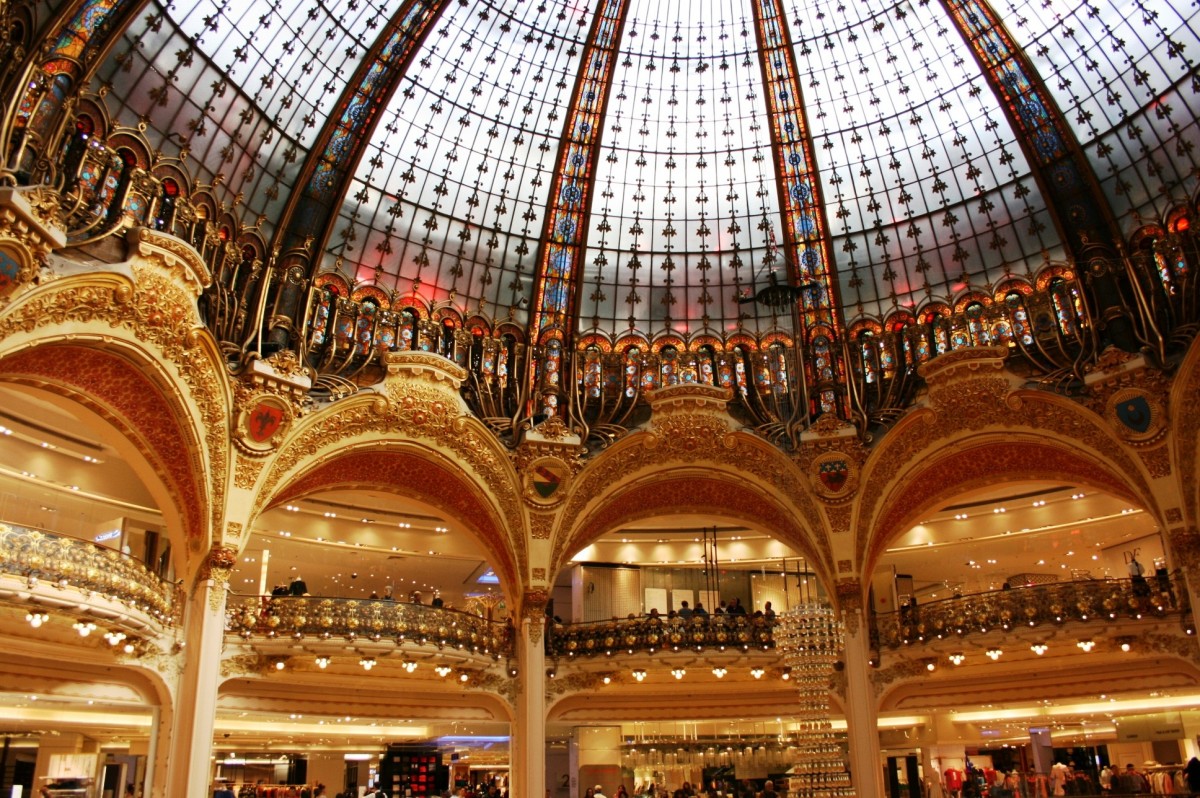 “So as not to disturb business, renovations will take place at night.  Any glass panels that have been removed will be replaced with temporary ones so that customers don’t see the construction site,” explains Fimbel.

Those that are “in good shape, but dirty” will be cleaned while the lead settings that tie everything together will be completely redone.

The white glass dome, built above the ornamental glass ceiling to protect it from the elements, will also be dismantled and replaced by opaque glass panels, as “the old ones didn’t have any historical significance,” details Fimbel. 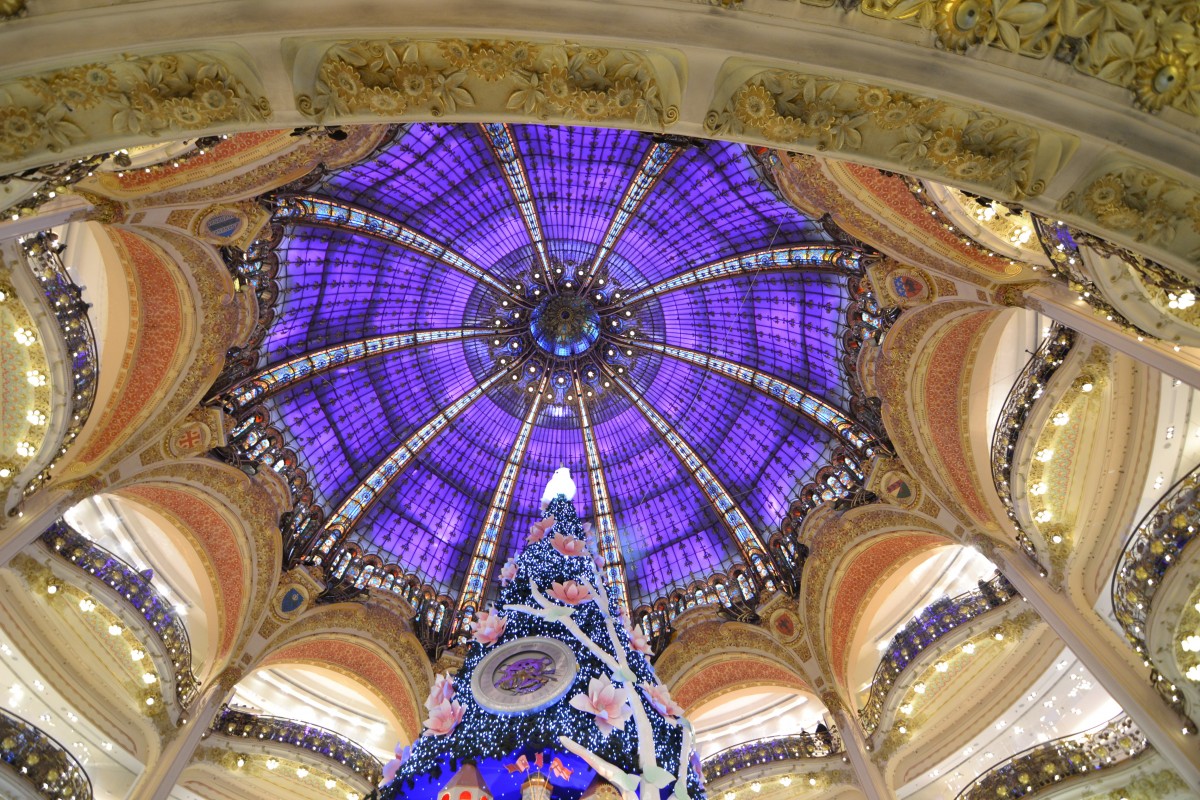 The original stained glass windows that were removed during World War Two will also be replaced. “The City and the préfecture de police made it mandatory that glass roofs be removed to protect citizens from shards in case of bombings.  Removal probably took place in 1944, although some of the precious stained glass that was numbered and stored in boxes was never found.  They were replaced by white glass, as Jacques Grüber died in 1936,” explains Fimbel.

Although the construction site is not visible from within the store, an imposing network of scaffolding erected above the dome gives itself away.  This metallic structure, covered by a tarp, allows for access to the top.  Construction waste is disposed of via a passage built especially for the project, which leads to rue de la Chaussée-d’Antin.

With renovations expected to be done this summer, impatient observers have just a few more months of waiting before the new dome is revealed in all its brilliance.