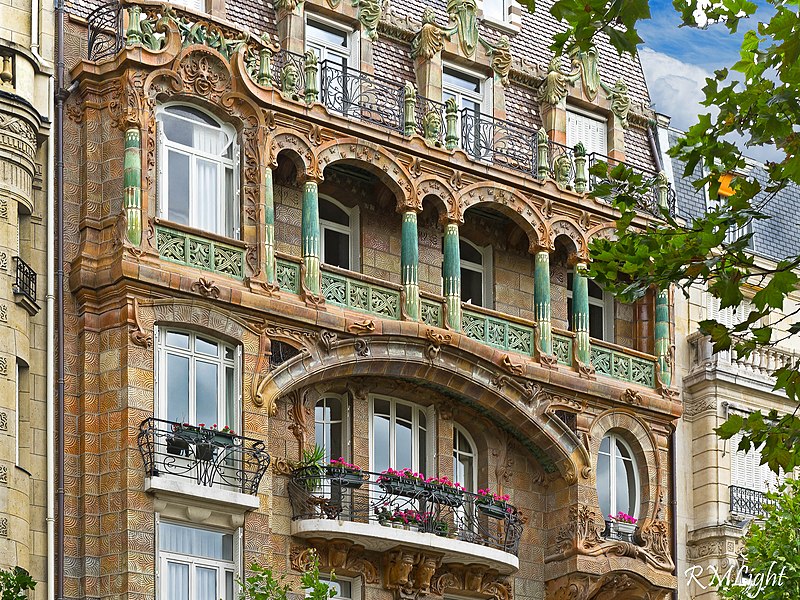 Paris architecture: Step back in time to the magic of the Belle Époque

A carefree period of unprecedented economic prosperity and industrial progress, la Belle Époque stretched from the end of the 1870s to the outbreak of the First World War in 1918.  In art, this time period was marked by the development of Art Nouveau and a certain need for ornamental opulence, the traces of which can still be seen in Paris today.  So set off in the footsteps of the Belle Époque in Paris, with the help of Vivre Paris, and discover five of the most jaw-dropping sites from this glorious era.

If there is one bridge in Paris that fascinates us all, it’s this one: since its inauguration in 1900, the pont Alexandre III has become as emblematic of the capital as the Eiffel Tower or Notre-Dame. Its richly-decorated railings, overloaded with motifs and touches of gold, make this work of art one of the most characteristic monuments of Belle Époque architecture: from its 32 bronze candelabras and twenty or so sculptures, to its four monumental pillars representing the goddess Pheme at the top and the great periods of French history (Middle Ages, Renaissance, Louis XIV and the modern era) at the base, the ornamentation along this bridge is a true delight for the eyes.

Looking to discover some regional culinary specialities in an iconic and sumptuous restaurant? Head to le Train Bleu, an establishment steeped in history, located in Paris’s Gare de Lyon in the 12th arrondissement. In this restaurant, inaugurated in April 1901, the show takes place as much in the dining room as it does on the plate: in the middle of the restaurant’s rich, neo-baroque decor, typical of the Belle Époque, works of art, including three paintings of France’s three largest cities, Paris, Lyon, and Marseille, adorn walls and ceilings.  Most of the establishment is even classified as a historic monument, and it’s easy to see why!

Built, among many of Paris’s most monumental structures, for the World’s Fair in 1900, the Petit Palais is an architectural masterpiece by Charles Girault, who also coordinated construction of the neighboring Grand Palais. Home for over a century to the Musée des Beaux Arts de la Ville de Paris (Fine Arts Museum of Paris), the Petit Palais is full of splendid Belle Epoque-era details, like its sumptuous spiral staircase leading to the salle Carpeaux; its many galleries, decorated from floor to ceiling; and, of course, its patio.  On top of it all, the rare treasures and great diversity of the Petit Palais’s collections make this (free) museum a true must-see in Paris.

29 avenue Rapp, 7th arrondissement. Remember this address, because it’s where you’ll discover the most fascinating building in Paris.  Its exuberant Art Nouveau facade, the work of architect Jules Lavirotte and ceramist Alexandre Bigot, unfurls with abandon. From its floral motifs that intertwine in all directions, to its representations of animals that sprawl out in complete asymmetry and its brick and ceramic mosaics, everything is absolutely dazzling. Not to mention the main entrance door, which hides one of the least discreet phallic symbols in the capital.

To treat yourself to a little something sweet all while discovering one of the most beautiful shops in Paris, head once again to the 7th arrondissement, where the chocolaterie Debeauve et Gallais bewitches us both with the quality of its products (beware of the price, though) and the decor of its interior.  One of the oldest chocolateries in France, known to have been Napoleon I’s favorite supplier, Debeauve and Gallais boasts light woodwork, marble columns, and an undulating countertop that make us feel like we’re in a painting by notorious Belle Époque-era artist Jean Béraud himself.