Summer in Paris: Discover five of the capital’s most surprising architectural wonders

Among the hundreds of thousands of buildings that fill the capital’s streets, certain structures immediately stand out for their stateliness, their elegance, or quite simply their uniqueness.  With the arrival of summer in the capital, now is the perfect time to head out and explore some of Paris’s most unique architectural gems.  Thankfully, the team at ParisZigZag has scouted out five of the capital’s most distinct facades, ranging from Moorish-inspired structures to medieval homes, that are well-worth a visit.

A geometric mosaic of ocres and blues, completely done in ceramic, this sublime edifice on rue Faidherbe in the Charonne neighborhood is impossible to miss.  Built in 1926, in the middle of the Art Deco movement, the building was the long-time home of the Boutet Company, one of the largest plywood factories in France and the greatest importer of exotic wood in the capital. The building now houses a luxury hotel, and its facade, completely renovated before the opening of the hotel, continues to impress.

The exuberant façade of the Comédie italienne theatre has been located at 17 rue de la Gaîté in the 14th arrondissement since 1980, in the place of a former police station. Painted in colors of cyan blue and gold, with its baroque columns and angelic statues, this small theatre has no trouble standing out from its surroundings.  In the past, La Comédie italienne was also painted in red or in the vibrant colors reminiscent of harlequins.

It is impossible to miss these buildings located at 11 and 13 rue François Miron, in the heart of the Marais.  In obvious medieval style, these tall and narrow houses have kept their period half-timbering over the years thanks to restoration work carried out in the 1970s. On the facade of the first house, number 11, we can read “à l’enseigne du Faucheur,” which means that this house was named after harvesters.  On the second house, we see “l’enseigne du Mouton,” as this house was symbolically named after sheep.  If you’re looking for a bit of history, these  medieval homes are the perfect place to visit for a jump back in time!

Located a few hundred yards away from the Maison de Radio France in the 16th arrondissement, this vast 700 m² building invariably attracts the attention of passers-by… and for good reason. 120 years after being built, its architectural exuberance continues to amaze: its facade made of burrstone and bricks, its over-elaborate balconies, and its entrance, one of the most beautiful in the capital, are absolutely extraordinary! 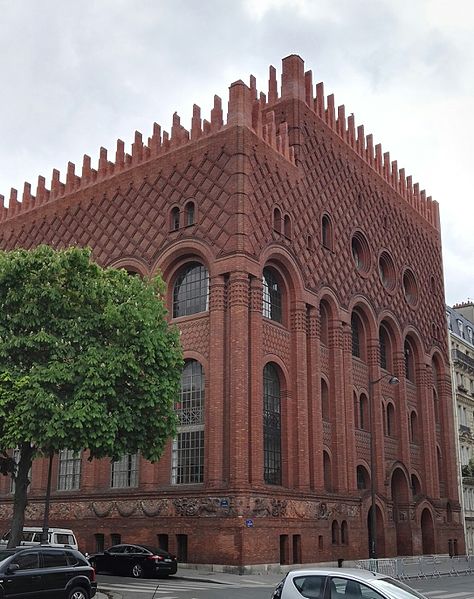 Located a stone’s throw from the Jardin du Luxembourg, l’institut d’Art et d’Archéologie, built between 1925 and 1928, is completely atypical from the Parisian architecture surrounding it.  Some see it as having Moorish influences, others lean towards Tuscany or sub-Saharan Africa, while still others see it as a mixture of the three.  One thing is certain, however, l’institut d’Art et d’Archéologie does not go unnoticed.