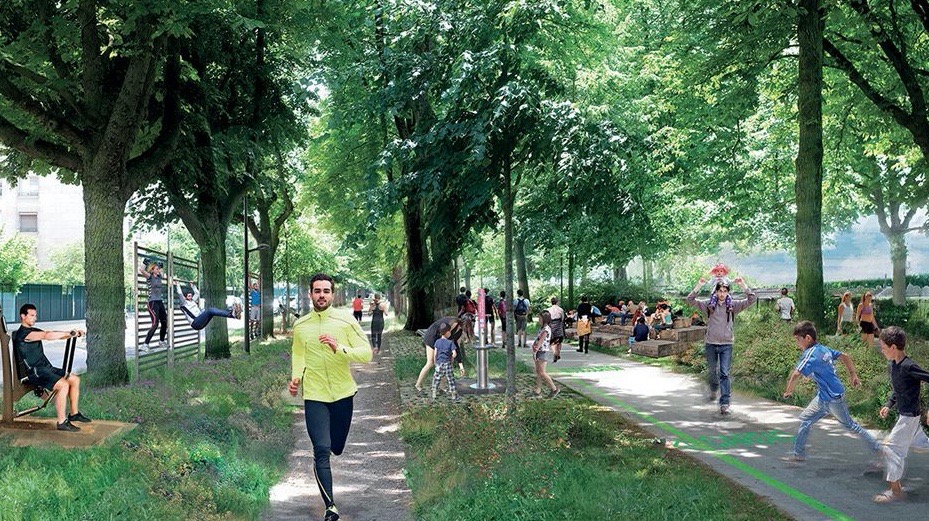 Public greenway to circle Paris by 2024

Commissioned by the Paris City Hall and designed by the Atelier parisien d’urbanisme (l’Apur), the “Parcours sportif de la Ceinture Verte” is a 40 km stretch of running, walking, and biking paths that will loop entirely around the city of Paris along the Maréchaux and the périphérique. Designed as part of a “legacy strategy for the 2024 Olympic and Paralympic Games”, the project’s number one goal is to promote physical fitness in the capital by essentially turning the city into an open-air sports ground.

For those fitness enthusiasts who aren’t the biggest fans of cardio, free access to sporting equipment areas along the greenway will also be available.  The addition of bocci ball spaces, ping pong tables, climbing walls, picnic tables, and children’s play areas will also be part of the overhaul.  42,000 square meters of asphalt will be turned into green space and 600 trees will be planted.  The greenway will also be in close proximity to a large number of sports facilities around the capital.  Within a radius of 350 meters from the path, walkers will find:

Olympic competition venues as well as a number of city parks and gardens.

Although the focus of this project is on promoting physical fitness in all its forms, the arts and humanities must also be given pride of place, since the route will cross several Parisian cultural institutions, such as the Musée national des arts d’Afrique, the Porte de Versailles expo center, and the Palais des Congrès.  In addition, 6 kilometers of blank wall space will be set aside for street art.  Although there is not yet an indication of when construction will begin, we do know that it will be a colossal project, especially since 9 km of pre-existing path will have to be widened.