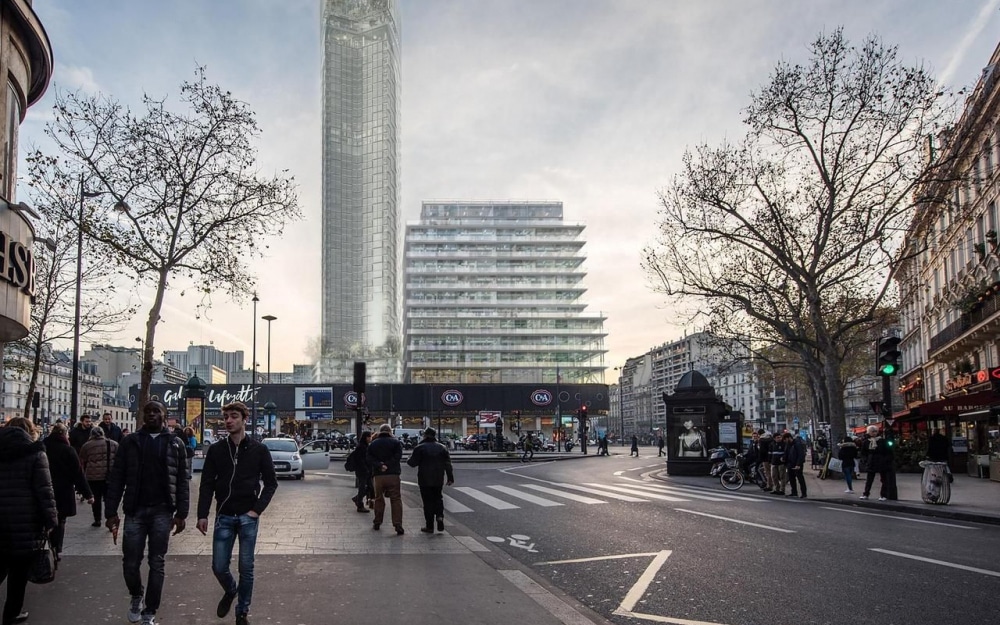 As part of the modernization of the Montparnasse neighborhood, the City of Paris will provide for the creation of 500 – 700 jobs in the future Paris-Montparnasse station while the CIT tower will undergo a complete renovation toward energy-efficiency.

Straddling the 14th and 15th arrondissements, Montparnasse station is being transformed, and with it, the whole neighborhood.  This major renovation project began a year ago and will not be completed until 2020.  Residents will see the creation of a vast 20,000 m² commercial zone, and at the Gaîté shopping centre on avenue du Maine, the arrival of a large Leclerc supermarket or even a giant food court with 35 stalls and restaurants, has already been announced.

With construction comes jobs, and as such, an estimated 500 to 700 jobs should eventually be created within the Montparnasse station.

It is in this context that the City of Paris, alongside the manager Altarea Cogedim and Pôle emploi, signed a PPEE for a period of three years.

For the town hall, the main aim is to direct these new jobs towards disadvantaged people or those furthest from employment: young people, seniors, active job seekers, those currently receiving unemployment, or people with disabilities. “In presenting these jobs to job seekers, young people and seniors in vocational guidance, this pact provides for the implementation of training prior to recruitment,” explains Afaf Gabelotaud, Deputy Mayor of Paris in charge of employment policies. It “aims to set up concrete actions to promote local recruitment,” adds Nicolas Garnier, territorial director of Pôle emploi Paris.

The signing of this pact took place a few days after the completion of a job fair within the station itself, “which generated the pre-selection of 1,200 applications and the effective registration of 172 candidates,” within the companies present, according to the City.

Similarly, as part of the overall upgrading of the EITMM (L’Ensemble Immobilier Tour Maine-Montparnasse), the CIT tower will be radically renovated by 2022.  The CIT stands at the foot of the Montparnasse tower, a cube of offices that was once known as Centre International du Textile.  Architecture firm Lacaton & Vassal has been almost unanimously chosen among 9 other candidates to renovate the building.  The cost: €50 million.

These Parisian architects intend to both “open the building” and preserve its “overall identity of the 1970s”, where textile showrooms have given way to a multitude of offices.

“The objective is not to question what was once its purpose, but to bring it back to today’s standards, and to place this office tower in the global attractiveness of the district,” explains Anne Lacaton. The challenge is not insignificant, as the team must simultaneously enhance the value of this heritage site and reinforce the link between this small cube and the giant Montparnasse tower, all while taking into account current concerns regarding “sustainable” quality and comfort.

The key element of the project will be natural light. Leaving behind its dark facade, the tower will be covered with sliding windows and balconies extending from the offices.  The advantage is also energetic, thanks to “a device that captures passive solar gains, and a modular protection that cuts out excessive sunshine and overheating, and dims interior brightness as needed in all seasons.”  As a result, less energy needs are required.

The project’s second asset: the transformation of the 12th and 13th floors into bioclimatic greenhouses, two levels that up util now, are entirely occupied by obsolete technical equipment consuming space and energy.  The greenhouses will be able to “preheat” fresh air by capturing passive sun energy, to the benefit of the entire building. The recycling of rainwater and the production of photovoltaic electricity will also make it possible to “optimize the energy balance” of the building.

According to the project designed by Lacaton & Vassal, the tower will be made of glass and will also house a bioclimatic greenhouse. (Photo: Lacaton & Vassal architects)

A stroke of luck and even a necessity for the 120 co-owners: “The cost savings that this project will generate will allow us to finance it over 10 years,” says Karim Salhi, one of the owners.

Work could start in 2020, and would empty the building of its occupants entirely for about two years.

5 architectural must-sees less than one hour from Paris
No need to travel far from Paris to discover some true architectural gems.  Created by Ricardo Bofil, Le Corbusier, or even Gérard Grandval, these surprising places are all less than one hour from Paris.     Les espaces d’Abraxas in Noisy-le-Grand  Architect: Ricardo Bofill Inaugurated in 1983, Les espaces d’abrasas are a complex of three residential […]
Search
Find us on
Facebook
Get the PPG Monthly newsletter