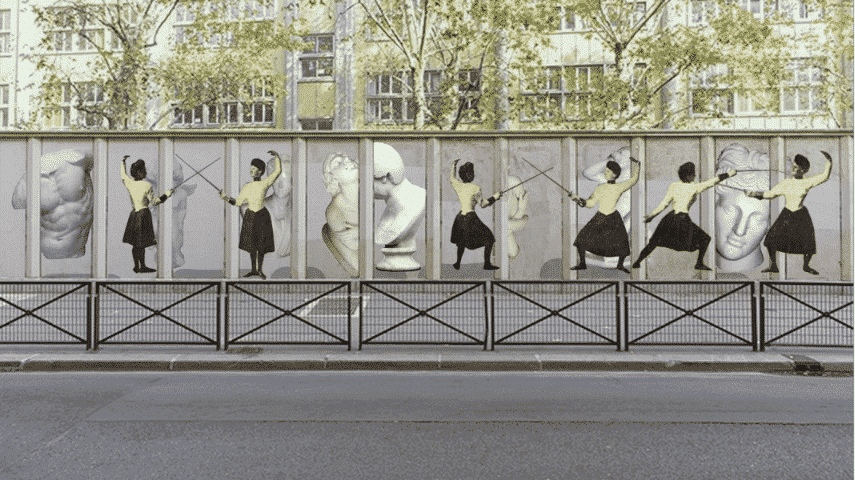 The objective of “Embellir Paris” (“Beautify Paris”) is to enhance the capital’s “forgotten nooks and crannies, all those abandoned or insufficiently developed parts of the city where our residents live their everyday lives,” says Christophe Girard, Deputy Mayor of Culture of the City of Paris.

Designed by architect Aldric Beckmann, “Tangram on Raspail” is a landscape fresco made of colored enameled glass panels that will cover the wall of boulevard Raspail near the intersection of rue Notre-Dame-des-Champs in the 6th.

Launched on November 9th of last year, the campaign proposed 20 locations around the city deemed worthy of some sprucing up and asked artists and creators of all backgrounds, styles, and years of experience to contribute their plans for improvement.  After three months of public voting, 300 projects were chosen for deliberation.

From March 18th to the 20th, a panel of judges representing each location, composed of local mayors, neighborhood council representatives, and qualified personnel in the world of arts, culture, and urban planning, gathered to select the winners.  Second-place candidates were also chosen, in case of pushback from Les architectes des bâtiments de France, who oversee the general protection of France’s architectural heritage, or in case of any unforeseen problems.  Christophe Girard, alongside Jean-Louis Missika, Deputy Mayor of Urban Planning and Architecture, announced the 21 winners of the competition on March 22nd, at the Pavillon de l’Arsenal in the 4th. The official list of finalists was submitted to the Council of Paris on April 1st.

Born in 1987, the Portuguese artist Vhils will use drills and chisels to scrape and remodel the wall at the corner of rue Ambroise-Paré and rue Guy-Patin in the 10th, painting faces in the subsequent relief.

To liven up the walkway located under the aerial metro of boulevard de la Chapelle (10th-18th), Randa Maroufi, supported by the Institute of Islamic Cultures, will display photographs of neighborhood residents, especially women.

With a budget of one million euros allocated by the City, artistic teams will have 50,000 euros at their disposal to realize the completion their project by the end of August.