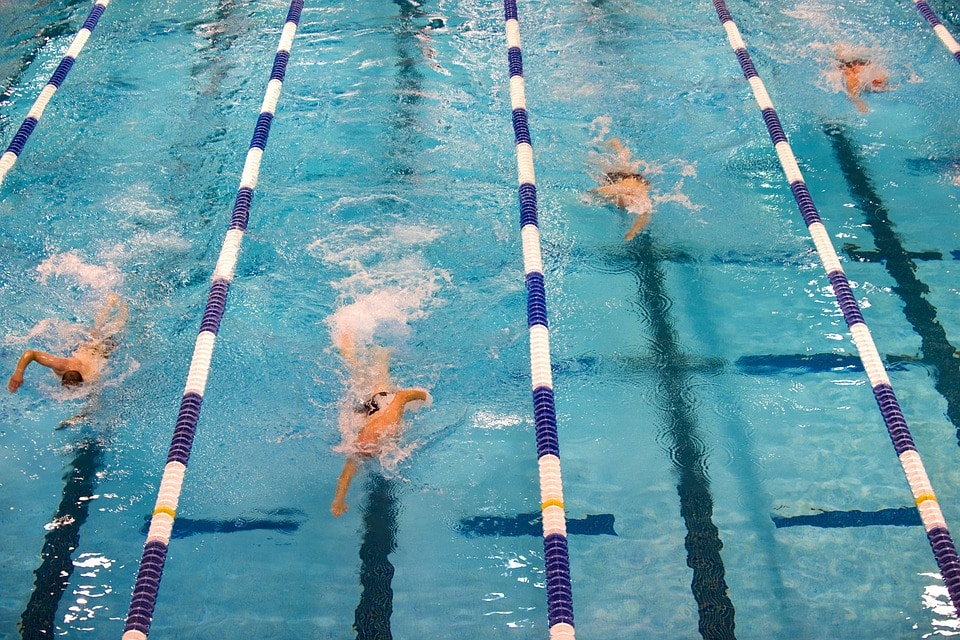 A modern, eco-friendly olympic pool will open in Paris in 2020

Situated in Paris’ 20th arrondissement, in the new Python-Duvernois neighborhood between Mairie de Miribel and la Porte de Bagnolet, la piscine Serpollet-Davout will not only be technologically advanced, but also exceptionally self-sufficient and eco-friendly.  A space truly ahead of its time.

The pool is the collaborative vision of TNA Architectes and the City of Paris, who both wanted to create a space unlike any other.  Their number one goal was to prioritize modernity through state-of-the-art, environmentally friendly equipment.  The pool will thus boast a heat recuperation system, solar panels, and fully integrated technical systems.  One-third of the energy consumed will be either renewable or recovered through the solar panels. Rainwater will be collected to water the roof garden. Compared to a traditional swimming pool, energy consumption will be reduced by 40% and water use by half.

Under a cathedral ceiling, visitors will enjoy a six-lane lap pool (25 meters long), a separate four-lane learning and play pool of the same length, and a 50 m2 children’s wading pool and splash pad.  A first in Paris, “the 2 meter deep lap pool will be equipped with a movable floor that can change height through a hydraulic system, depending on different activities taking place like aqua-biking, swim lessons, etc.,” notes Nassim Sol, the architect following this €11.6 million project for partner agency Chabanne +.

Discover all that la piscine Serpollet-Davout has to offer through the informational video released by TNA architectes:

“The pool will be bathed in light from morning to night,” promises Sol, “the walls will be largely made of glass to the east, south and west.” A 250 m2 solarium will also be built on the ground floor as well as on the roof where a public vegetable garden will be planted.  The Serpollet-Davout Pool is the first in Paris to receive the label of Haute Qualité Environnementale. Construction will cost la Mairie de Paris 19 million euros as part of city developments in preparation for the Paris 2024 Olympic Games.

For Jacques Baudrier, Paris Councillor (PC) in charge of urban renewal, this new swimming pool is in a way the “first stone” of the Grand projet de renouvellement urbain (Great Urban Renewal Project) of 20th arrondissement, which will profoundly modify the district in the coming years. “And we don’t intend to stop there,” notes the politician representing the 20th arrondissement: “The arrondissement council has just voted in favor of a fourth swimming pool to be built in the 20th, towards the rue de Lagny.”

Voted in 2015, the urban renewal project Nager à Paris (Swim in Paris), with a budget of €150 million euros, is about 70% of the way through its 104 planned projects.  The objective of the project is to upgrade Paris’ 39 municipal swimming pools, which welcome about 7 million people each year, and expand them to meet demand. Among the many flagship projects of this ambitious undertaking, the new public swimming area in the Bassin de la Villette (19th) attracted 110,000 visitors last summer for its second season. Major renovations were completed this year in the Emile-Anthoine (15th), Mourlon (15th), Amiraux (18th), and Vallerey (20th) municipal pools. Night openings (8-10 PM) have doubled to 42 per week this season. In terms of user comfort, ATMs have been installed in 26 swimming pools since the end of 2017 and an application allowing users to track pool traffic in real time is planned for the end of 2019.  In addition to the Serpollet-Davout pool, Paris is welcoming entirely new swimming areas within the Centre sportif Elisabeth (14th), opening next year at Porte d’Orléans, and on rue Belliard, near Porte de Saint-Ouen (18th).