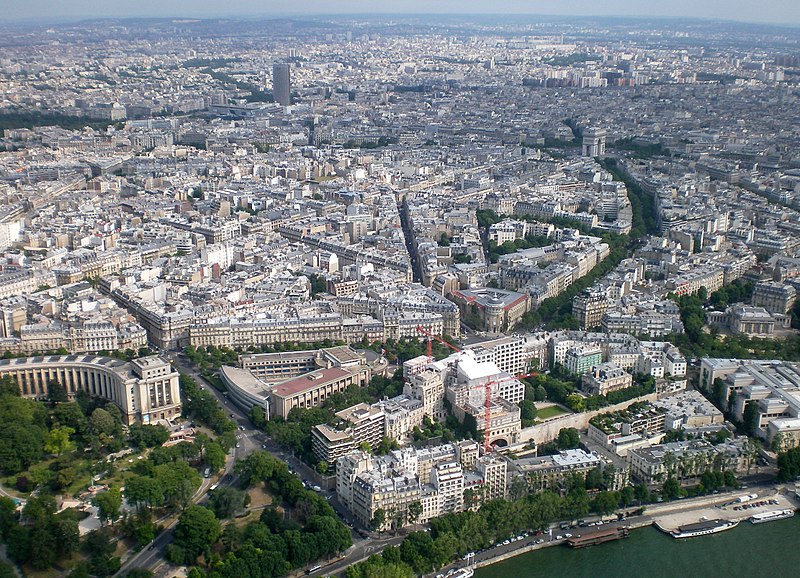 Paris real estate: Half as expensive as London and a third less than New York

Though final figures won’t be available for awhile, “According to market data, the price per square meter could exceed 9,600 euros in December 2018 in Paris.  The annual increase would be lower than a year ago (8.7%), but could still exceed 6% for 2018, when all the data is in and analyzed.” the review outlines.

Economic analysis firm Xerfi wonders whether, as far as real estate is concerned, Paris has become too expensive for its own good, touting prices that are too exorbitant in comparison with other similar cities.  The price per square meter is 2.5 times more expensive than in Lyon, and four times more expensive than in Marseille, two of France’s largest cities. “Paris is [also] the least affordable city in continental Europe in relation to the income of its inhabitants,” says Alexandre Mirlicourtois of Xerfi.  The median net income of a single person “in Paris is about 2,200 euros per month,” compared to the minimum price of a two-room apartment, which ranges from 300,000 to 400,000 euros depending on the neighborhood.

This outbreak has spread well beyond the périphérique ring road that encircles the city. The entire Île-de-France region, where almost 20% of the French population (12.2 million inhabitants) lives, is affected by this price drift. “At the end of the year the annual increase in apartment prices could be, on average, 6.6% in the inner suburbs (Hauts-de-Seine, Seine-Saint-Denis, Val-de-Marne) and 2% in the outer suburbs (Essonne, Val-d’Oise, Seine-et-Marne, Yvelines).” 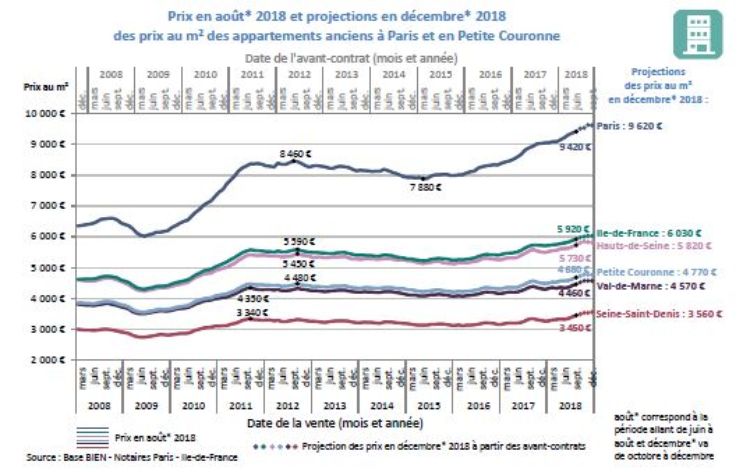 Sale prices for pre-existing apartments in Paris and in the petite couronne (inner suburbs) in August 2018 and projections for December 2018.

As for homes, rates are stabilizing. “Few changes are expected between September and December 2018, but given past increases, particularly this summer, the annual price increase could be 3.6% at the end of the year,” says the Chambre des notaires. This is double the expected inflation rate for 2018 (1.8%) according to INSEE. The median price of houses anticipated by notaries for December is 379,400 euros in a department such as Yvelines, while it has easily surpassed the 600,000 euros mark in the Hauts-de-Seine region since spring (610,500 euros at the end of August, up 3.2% over a year). 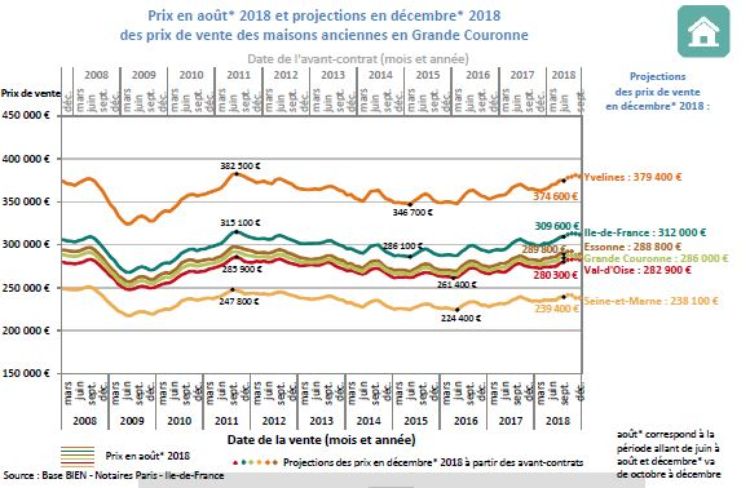 Sale prices for pre-existing homes in the grande couronne (outer suburbs) in August 2018 and projections for December 2018.

Given this surge in real estate, the number of homes sold in Paris is on the decline (-5% from June to August 2018 compared to the same period in 2017) and even more so in the petite couronne (-7%). On the other hand, in the four departments of the grande couronne, where real estate is still “affordable”, market activity remains the same as last year. The median prices of pre-existing apartments are still 3,810 euros/m² in the Yvelines; 2,720 euros/m² in the Val-d’Oise; 2,630 euros/m² in Seine-et-Marne; and 2,610 euros/m² in Essonne.

Roughly speaking, with 49,920 homes sold from June to August 2018 in the Île-de-France region, activity remains strong, despite prices that seem to have become inaccessible for local buyers.

A study published in October by Century 21 shows that Paris has become the third most expensive major metropolis in the world after London and New York. At current prices, the branch network calculated what is possible to buy with 300,000 euros ($345,000) in the world’s largest cities. Answer: 18 m² in London, 20 m² in New York and 31 m² in Paris (provided you buy an apartment of moderate quality in a neighborhood with average prices). The French capital now far exceeds Tokyo, where for the same price it is possible to own a 52 m² home, Berlin (70 m²), and Brussels (100 m²).

Despite these exorbitant prices, who still has the means to buy in the capital? “Very few first-time buyers,” real estate professionals reply in chorus. “Most of our clients are investors,” says Kathryn Brown, operations director of the Paris Property Group. In other words, people who have money to invest and who choose real estate for rent. There are also “buyers residing abroad, who buy for the pleasure of having a pied-à-terre in Paris, but also to invest” she says.  Otherwise, the vast majority of other buyers are “second-best buyers”: “People who bought an apartment a few years ago and have since sold it for a large profit that allows them to take an additional step towards buying more”, explains Fabrice Abraham. Some (older) landlords may even resell in order to take a smaller apartment “when their children leave the family home”. The added value is sometimes used to help them buy a small home, or is saved for their elderly years.

As for modest spenders or those in the middle-class who are looking to buy despite prices, the market, which is “a real centrifuge, has pushed them back beyond Nemours in the south of Paris, beyond Rambouillet in the west, beyond Meaux in the east, and beyond Compiègne in the north,” Abraham analyses. “This is indeed why Parisian companies have difficulties in recruiting certain types of employees, and why transport times are constantly increasing for a large proportion of people working in Paris,” Alexandre Mirlicourtois from Xerfi also point out.