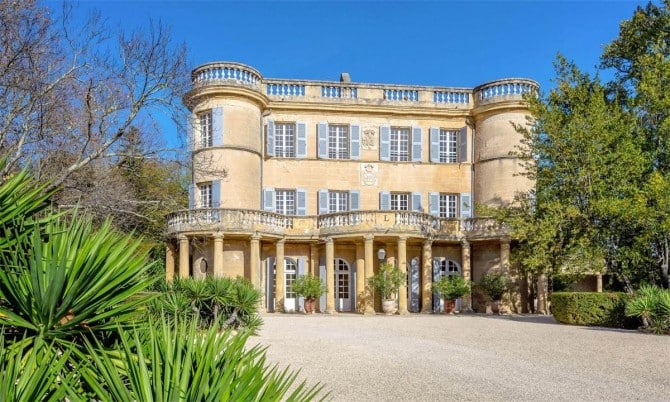 Castle containing Picasso frescoes for sale in the South of France

The Château de Castille, located near Uzès in the south of France, has been put up for sale by international realtor Sotheby’s. The building is listed as a historic monument as it contains five large murals designed by Picasso. A particularly unique property is up for sale near Uzès in the south of France. The Château de Castille — or Castille Castle — stands out not only by virtue of its seventeenth century architecture, but also thanks to the five monumental frescoes designed by Picasso decorating its inner façades.

These five large drawings, including depictions of nudes and bullfighting, earned the castle a historic monument classification in 1983. The dining room, outer columns and façade of the house are also protected under the classification and must be preserved. The historical classification entails that future owners must comply with strict maintenance and restoration rules. Nonetheless, this does not seem to have scared off potential buyers. Alexander Kraft, CEO of Sotheby’s International Realty, the agency in charge of the sale, states he has already received several calls from interested parties from “all over the world”.

Fortified in 1362, rebuilt in the seventeenth century and renovated in the eighteenth, the castle was first owned by the Baron of Castille before being bought by British art historian and collector Douglas Cooper in 1950. Cooper was multilingual, wealthy and involved in salvaging artwork looted by the Nazis during the war. He was close to a number of prominent artists including Braque, Léger, Klee, de Staël and Picasso. The latter regularly visited Cooper at the Castille Castle and was even keen on purchasing it. Between 1962 and 1963, the artist designed and oversaw the completion of five frescoes in the mansion. Picasso designed the drawings while Carl Nesjar — in collaboration with Erik Hesselberg, Thorbjoern Ulvoden and Leif Johannessen — engraved the murals into the walls. The house has belonged to a French family since 1977, but according to Kraft, “they live in Paris or abroad and now only visit Castille rarely”. No doubt purchasing a property often visited by Picasso holds enough appeal in its own right, but potential buyers mays also appreciate the mansion’s 560 square meters of inhabitable space, its seven bedrooms and the five acre park — complete with French gardens and oak-lined alleys — surrounding the property. Asking price is set at 8.9 million euros, and buyers should expect to undertake some renovation works. Photo credit: Sotheby’s International Realty