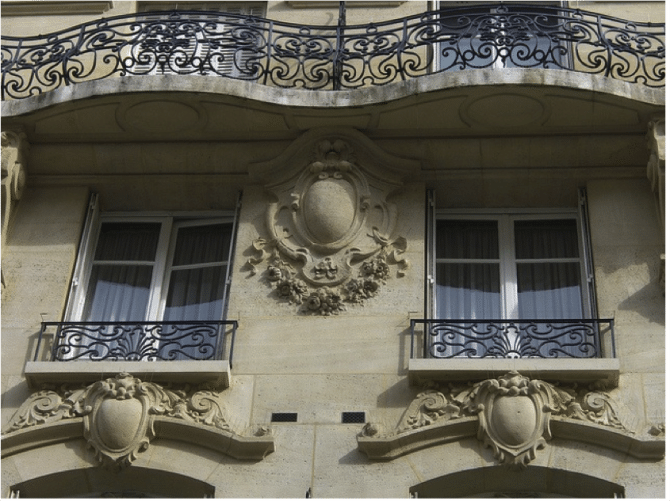 Paris renovation and decoration stories from the front lines: an apartment in the Marais neighborhood

The first in a series by our colleague, real estate developer and designer Laura Sanders, who handles fractional ownership for Paris Property Group. In these posts, she tells us about buying her apartment in the Marais and the renovation challenges it posed. After making the decision to raid your savings and buy an apartment in Paris, you simply move into your beautifully-decorated apartment and start your fabulous new Parisian life, right?

We’ve all seen the movies: Parisian apartments are gorgeous – soaring ceilings, elegant French doors, exquisite moldings, herringbone floors – yes, please. Pass the catalog; I want to pick one out! Unfortunately, it doesn’t always work like that. If only it were that simple. To start with, everything is old (but charming) and many Paris apartments haven’t been redone in a very long time. Often, when they have been renovated, it’s not to the standard you had in mind, especially when it comes to kitchens and bathrooms. Of course, all this is after you’ve even found your diamond in the rough, which is another story. Contrary to how the movies present them, not every Paris apartment is charming. But let’s suppose you’ve found one with fabulous bones. It just needs some work – or maybe quite a lot. What are you to do? You have two alternatives. Either you can jump into it if you like adventure and have a lot of time and money on your hands. That could all be great fun and rewarding or really miserable – but perhaps you can write a book about the experience later. Or you can hire someone who speaks the same language (meaning language language and the same design language) and has experience in making it happen. Let’s take a look at my recent project in the Marais. I searched for over 18 months for the apartment, but I’m picky and wanted a gorgeous building, a bit of outdoor space, a great location and most important – something with good bones (the key). With the help of Paris Property Group’s search services, I found it on rue du Roi de Sicile near metro St. Paul. The building is stylistically very different from most in the neighborhood, which I found charming. It’s a carved stone, very ornamental design more often associated with later buildings found in other arrondissements. The design even won an architectural prize (the 1898 concours de façade de la ville de Paris along with Hector Guimard for Castel Béranger). It had a balcony, an elevator (rare for the Marais) and a lot of potential – sold! The apartment was in pretty good shape for French standards but I knew I could make it shine. One of the maxims of Paris renovations is that you never know what you are REALLY dealing with until you get to see it for yourself. You can make good educated guesses and you typically have some floor plans (albeit they might be 70+ years old) to start with, but the plans rarely match the reality of what’s actually there. The apartment might have changed many times over the years. After confirming the plans, my team and I got to work. We started with the bizarre configuration of the kitchen and bathroom. I’ll describe how we did it in a later post. You might also like Real estate prices in Paris: a guided tour of the arrondissements Marais apartment for sale in Paris; rue Charlot, 75003 Who owns Paris real estate? Developments in French property sales to non-residents Paris Purchasing Power Up